If you’ve ever wondered what it would feel like to be immersed in one of the slow-motion “bullet time” sequences from The Matrix, Superhot (★★★★) is the game for you. Not so much a first-person shooter as a puzzle with guns (and baseball bats, katanas, axes, and wine bottles), it’s a devilishly complex game built around an incredibly simple concept: time only moves when you do.

Strung together by a wafer-thin yet mildly engaging narrative — the player controls a version of themselves in-game, until the circumstance gradually start to control the player — Superhot is a series of mini-puzzles. The player is dropped into an environment, given a few seconds to get their bearings, and then the fun begins. With a stark aesthetic — enemies are red, objects you can hold are dark blue, everything else is white or grey — Superhot distills the kill or be killed elements of most first-person shooters to its barest elements. Red is bad, death is final, and you have the skills to survive, but can you figure out how?

Superhot teases out its small moveset over the first few levels. Any time the player moves, be it throwing a punch, taking a step, bending down to pick up a gun, or deflecting a bullet with an ashtray (yes, this is possible), time will advance. That gameplay element, where time suddenly becomes both a weapon to wield as well as a constant nagging fear, is what makes Superhot so successful. Do you attempt to punch the person running towards you, knowing there’s another enemy behind reaching for a gun? Or do you grab an item, lob it at the person reaching for the gun to stall them for a few seconds, and then go for the punch? Will firing a submachine gun at a distant enemy allow one much closer to sink a bullet into your body? Can you run for cover without giving enemies enough time to advance on your position? Every move is calculated down to the millisecond, forcing players to rethink how and when to attack, and what they’ll use to survive.

Everything has been designed to remove the element of comfort. Guns have limited ammunition, throwables will shatter upon impact, and punches can only reach so far. But there are tactical advantages to taking risks. Throw an item at an enemy holding a weapon and they’ll let go as they stumble, launching it towards the player. You can snatch guns out of the air, allowing for some insane run and gun gameplay — throwing a wine bottle at an enemy, catching a shotgun, emptying its two shots and then lobbing the gun at another enemy becomes second nature. And if all else fails, let an enemy get close enough, stand still so that time slows to a crawl, and then just take the weapon from their hands. I can’t count the number of times I casually reached over to someone who was preparing to sink a bullet into my skull and instead returned the favour, watching the faceless entity shatter into red shards. For the sheer amount of times that will have you saying, “Holy shit, that was awesome,” Superhot really has no equal.

And that’s before you pick up a VR headset and play Superhot VR. A standalone game built around the same basic concepts of the original, it adds extra dimensions to the idea of time moving when you do. Suddenly gameplay isn’t dependent on not touching the analogue sticks. Now, every hand gesture, every head turn, every step is a potential split second of advantage given to enemies. If Superhot with a controller can make a player feel like a badass, Superhot VR (★★★★) will turn them into adrenaline-fuelled, sweat-soaked wrecks. Suddenly, those bullets flying towards your face become incredibly real. The advancing enemies are right up in your face. The environments have a depth and texture that wasn’t apparent before. And above all else, you’ll suddenly start to feel your body react as if you were actually there.

When enemies threw punches, I dodged. When bullets flew towards me, I bent backwards and watched them soar, in super slow-motion, over my head. When the environment offered cover, I dropped down and hid. Each action that felt slick and cool with a controller suddenly became visceral and real. Throwing items at enemies, aiming weapons, grabbing guns out of midair, everything took on a new resonance in VR. And every failed encounter — be it a bullet in my body, or an enemy that had snuck up and stabbed me, or failing to duck behind scenery in time — only heightened the urge to try again, to best the system, to prove my body could contort, freeze, and aim with the precision the game frequently demands.

It’s helped by the fact that Superhot never punishes players, in either VR or standard mode. Die and you’ll instantly respawn at the start of each scenario, which usually involves three to five individual environments. And while you’ll sometimes have to restart multiple times to really get to grips with enemy patterns and item layouts, there’s always a way — or multiple ways — to complete each level, it just requires thought and planning. This is, after all, a puzzle game masquerading as a shooter.

And once you’ve wrapped up the levels, there’s challenges and endless modes to keep you playing. Fancy working through the whole game with just a katana? That’s here. Wonder if you can beat the game without dying? You’d be insane to try, but that’s an option. There’s no multiplayer, and both games won’t take more than a few hours to complete, but there’s a lot of replayability beyond the story.

Ultimately, Superhot offers a lot from a refreshingly simple concept. If you’re looking for a fun twist on first-person shooters, or an addictive new puzzle game, or an intense workout, Superhot offers all that, and more. And players can pick up both the standard and VR versions and know they’re getting two great experiences. With a controller, it’s a precise, complex puzzler. With VR, it’s a little looser, a little lighter, but brings an immersion that’s relatively unparalleled, especially on the PlayStation 4. Indeed, if you ever want to show the benefits of virtual reality to someone, strap them into a headset, load up Superhot VR and watch the bullets fly. I guarantee they’ll be doing Matrix-style bends in no time. 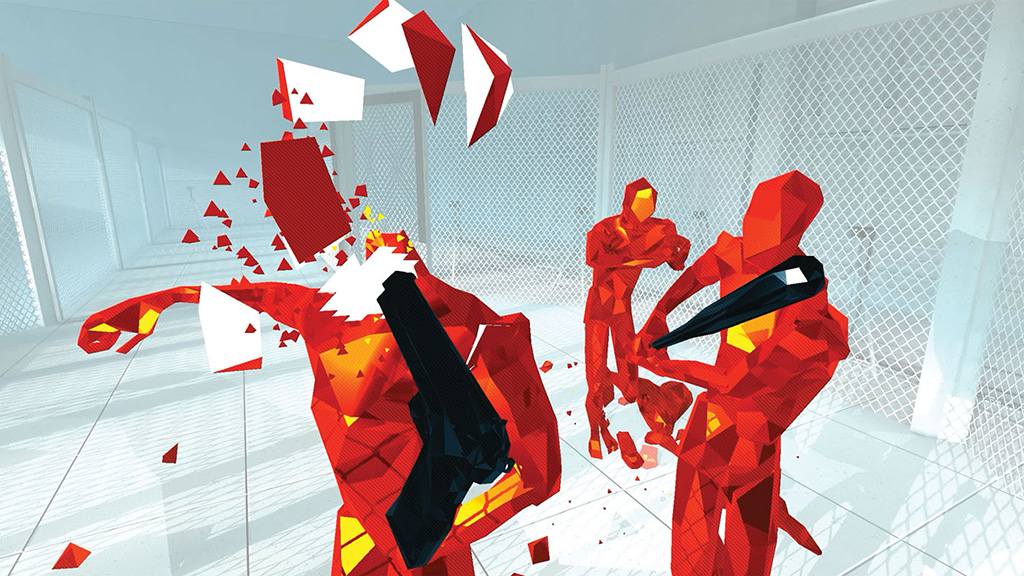