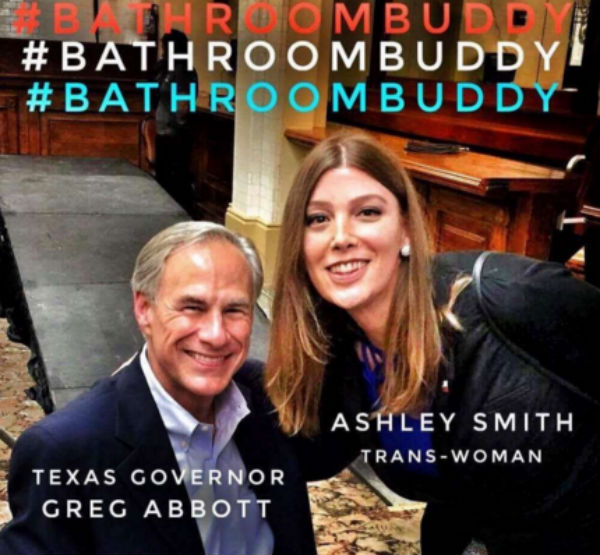 Currently, Texas lawmakers are convening for a special 30-day legislative session to consider legislation that Abbott deems necessary, including two versions of a bill that restricts transgender people to using only multi-user restrooms or locker rooms that match their biological sex at birth.

Senate Republicans, led by Lt. Gov. Dan Patrick, favor that proposal. House Speaker Joe Straus, and more moderate lawmakers within the Republican House caucus, favor another bill, which would only place those restrictions on school-owned facilities.

Against this backdrop, Abbott traveled to San Antonio to kick off his campaign for a second term in 2018. After giving a speech to supporters, he took a photo with Ashley Smith, a transgender activist and San Antonio resident who protested the regular session version of the “bathroom bill” and other anti-LGBTQ measures introduced in the legislature.

“I did not think [shouting] would work, or that I would be heard and was more interested in the getting the photograph and not getting thrown out,” Smith told the Express-News when asked why she did not protest Abbott’s appearance.

Instead, she took to social media, captioning the photo with #BathroomBuddy, identifying the governor and herself with the caption “Ashley Smith, Trans-Woman.” She posted the photo to Facebook before writing: “How will the Potty Police know I’m transgender if the Governor doesn’t?”

Her photo quickly began garnering “likes” and comments from other users.

“Once I had the photo, I was eager to get on social media just because I wanted to make a point,” she said.

“We’re about 1 in 300 people, we’re all over the place, we’re your friends and your neighbors,” she said of the trans community. “Some of us are not immediately obvious as trans. And the idea that you are going to be able to enforce a bathroom bill, I mean the enforceability is just not there.”

Smith says she’s encouraged by Straus’ opposition to passing the more restrictive bathroom bill favored by the Senate, and hopes that Texas lawmakers will be able to block anti-transgender legislation from being signed into law.

She also notes that many of Texas’ larger cities, including Dallas, Plano, San Antonio, Fort Worth, and Austin,  have had LGBTQ-inclusive nondiscrimination ordinances in place for years.

To Smith, this disproves one of the chief arguments being used to justify the passage of a bathroom bill: that without it, women and children will be vulnerable to attacks by predators in public restrooms. As it stands, there have been no documented incidents of any such attacks in places with expanded protections for LGBTQ people in public accommodations.