Queer gamers don’t exactly have a mountain of options to choose from if they want to see themselves represented in the games they play. There’s token characters and budding romances in big-budget titles like Mass Effect, The Last of Us and Dragon Age, or indie games like Gone Home or Life is Strange, or smaller efforts from LGBTQ developers. But of the hundreds of games released each year, only a handful truly cater to the gay gamer.

Enter Dream Daddy: A Dad Dating Simulator (★★★). It’s exactly what the title suggests, a game in which you, the protagonist, date daddies. It’s DILF: The Game, in other words. And, from the outset, it makes clear that queer representation, at least in some of its variations, is of tantamount importance. For starters, players create a character that best matches either themselves or their desires, including all manner of skin tones, hairstyles, facial hair options and accessories. As an additional touch, there’s the option to play as a trans male with binders, the wraps used by transitioning men to help them achieve a more masculine appearance. Dream Daddy doesn’t cater to everyone on the queer spectrum, but outside of perhaps The Sims, it at least tries to cater to a wide range of body types and gender identities, though admittedly only from a male perspective.

Once you’ve established your representation in-game, what does Dream Daddy actually entail? For starters, it’s a visual novel more so than it is an actual game. As a single father with a teenage daughter, you’ve just moved to a new part of town stocked with seven very dateable daddies, each covering various “tribes” — gym dad, bear dad, goth dad, WASP dad, and so on — and ethnicities. But surprisingly Dream Daddy isn’t all about finding the daddy for you and jumping into bed with them. Instead, there’s a surprisingly engaging and emotional, if ultimately slightly rushed and shallow dating adventure on offer.

After moving into your new cul-de-sac, you’ll move around the neighborhood bumping into the various dads — in bars, coffee shops, at your daughter’s school, in the park — and strike up conversations. These conversations are the main gameplay element, with branching options that can impact your relationship with each daddy. Sometimes they’re of no consequence, only advancing the story and slightly altering dialogue. Other times they can predetermine whether you’ll end up with that specific character, or what your relationship will ultimately be like. Get it right, and you’ll be rewarded with a shower of love hearts and eggplant emojis. Get it wrong and you’ll get a music sting and some dark shading.

There’s no guarantee of what’s right and what’s wrong. A response you might not perceive as negative could end any relationship options with a character, for instance. And early choices can impact further down the line. Go home with Robert, the brooding, scruffy man you meet in a bar, and enjoy a one night stand and he’ll rule out anything more when you meet again.

Outside of these choices, Dream Daddy‘s other gameplay element comes from minigames specific to each daddy. An early one had me grinning foolishly, as a game of oneupmanship with Brian, the beefy bear you meet in a park, turns into a Pokemon-style game of bragging about your daughter, complete with usable items — a treasured memento, an old grade card — and flee options. Others are less successful, such as a game of minigolf that can ultimately rule out dating options should your swing be less than accurate.

Even if as a game Dream Daddy is a little light or even confusing, it redeems itself in its portrayal of the relationships between its various fathers. Though your choices determine who you will ultimately end up with, you’re free to date as many of the fathers as you like. Two dates are allowed with each, with the third determining who you’ll enter a relationship with — effectively ending the game. It’s not a case of constant sexual puns and intense flirting. Instead, these fathers bond over the struggles of parenting, lost partners, aging, careers, likes, dislikes, and their attractions for one another. Friendships can be established before dating is even considered, and you can opt to remain friends to focus on another daddy for a proper relationship. The dialogue is natural, humorous, and laced with more dad puns than you could ever have hoped for.

But it’s the relationship with Amanda, your high school senior daughter, that shines most. As you navigate the dating world, trying to figure out who to proceed further with, its her life and the interactions with your character that are perhaps most memorable. Whether it’s the secret she’s keeping from you, the conversations with her at the end of each date, or just relaxing and getting food together, the actual process of fatherhood is something that Dream Daddy gets right — at least as far as idealistic daddy dating visual novels go.

One curious dissonance in this queer-affirming world is the actual lack of any discussion over identities or sexuality. Every daddy is assumed to be, if not outright gay, at least bisexual or curious. Some have been (or currently are) married. Some have one child, others have more. But no one stops conversation to specifically note that they are queer and they are interested in you. In Dream Daddy‘s world, these things are just assumed. It’s both refreshing and at odds with reality, where attaching labels to everything is du jour.

However, don’t expect to see anything raunchy. Unlike other gay-themed visual novels, such as Coming Out on Top, you won’t be witnessing any daddy-on-daddy fun. Sex happens behind a black screen and is quickly passed over. Dream Daddy gets its kicks from conversations and interactions, not from steamy kissing or sweaty sex. It’s a slightly sterile treatment, yet one that ultimately fits in a game as much about friendship and fatherhood as trying to find someone to fall in love with.

Is Dream Daddy worth your money? Maybe. I had a lot of fun working my way through its conversations, trying to pick the right daddy for me — I had to replay a couple of times, because I just couldn’t make my mind up — and otherwise slipping into its world for a few hours. In the grand scheme of visual novels it’s not the deepest, nor the most complex. Even amongst queer games, it’s not explicit enough for some nor particularly interested in discussing queer issues. Instead, Dream Daddy serves up exactly what its name suggests. It offers seven daddies and leaves you to decide which one to spend the rest of your days with. That the actual process of being a father, with all of its joys and stresses, is one of its strongest assets is just a welcome bonus.

Dream Daddy is $14.99 and available now on PC, via the Steam store. 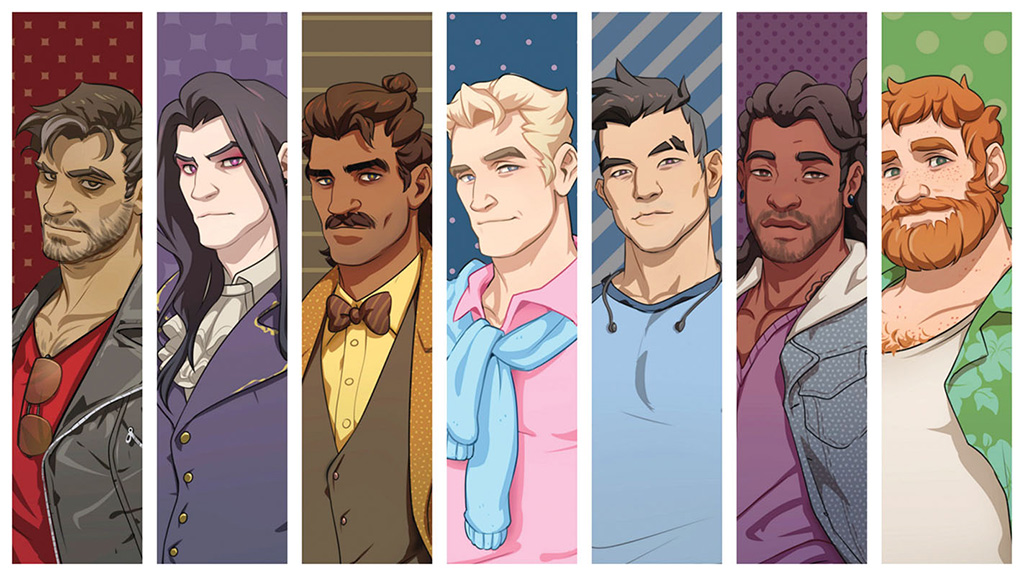