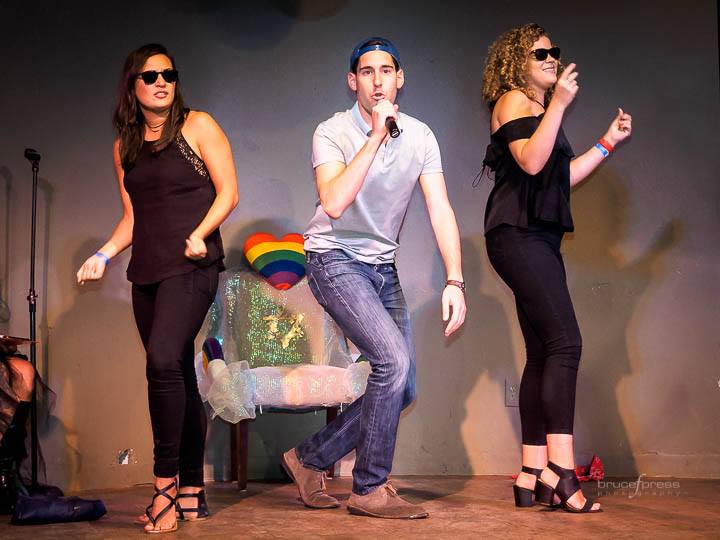 “I’ve been a part of the Nice Jewish Boys group in D.C. for a little over a year, so when the idea of a pageant was floated, it wasn’t something I’d ever envisioned myself doing before,” says Tony Cohn.

“To be honest, it was a little out of my comfort zone,” he adds. “But when I realized all the money we’d raise would be going to benefit The DC Center and GLOE, I got hooked and agreed to do it.”

Despite his initial trepidation, it seems that Cohn was fated to enter the Mr. Nice Jewish Boy DC pageant, where the 2015 American Univeristy graduate and native of Deerfield, Ill., took home the title in front of a crowd of about 150 audience members at Town Danceboutique on Aug. 13.

Prior to the pageant, Cohn and the other contestants made videos introducing themselves and asking for people to attend the pageant and vote for them (40% of the contestants’ score was based on votes from the audience). Nice Jewish Boys DC then posted the videos to YouTube to garner press and excitement about the competition.

Once he finished filming his video, then Cohn had to come up with an idea of what to do for the talent portion of the competition.

“I love creative writing, and so I did a Hamilton-inspired rap with two of my friends acting like backup dancers,” he says. “It was filled with Jewish puns and all sorts of other good stuff.”

Cohn says he doesn’t remember exactly what happened during the number, but it was apparently well-received.

“To be honest, I kind of blacked out. I was super nervous,” he admits. “But people came up to me afterwards and said they loved it. I had a lot of fun doing the pageant.”

When it came to the question-and-answer session, Cohn’s responses impressed the judges.

“One of the questions was about the Torah asking people to do good, and how I would continue that practice,” recalls Cohn. “I said that we, including everyone in the audience, were already doing that today to help raise money for worthwhile causes that benefit our community. That seemed to go over well.

“Another question came from a Jewish mother who was a judge. She asked ‘If you were taking my son out on a date, how would you make his night “different from all other nights”?’ — which is a reference to Passover,” says Cohn. “So I said, ‘Your son wouldn’t just sit on a regular chair, he’d sit on a cushion,’ which is a tradition on Passover, and then I played off the Four Questions of Passover with my answer, including the bitter herbs, and matzah, and all that.

“I also said, ‘If your son is single, give him my phone number,’ and then said my number in front of everyone,” Cohn jokes. “He hasn’t called me yet, but maybe he will.”

In total, the event raised just shy of $2,000, which will be donated to The DC Center and GLOE, the Kurlander Program for GLBTQ Outreach and Engagement at the Edlavitch DC Jewish Community Center.

As the winner, Cohn also received $180 to donate to the charity of his choice. He’ll be donating that money to the Southern Poverty Law Center’s efforts to combat hate groups, in light of the recent outbreak of violence at a “Unite the Right” demonstration in Charlottesville, Va.

“This wasn’t something I thought I’d ever do, but I’m glad I did it. Everyone as great and talented and it was a lot of fun doing it,” says Cohn. “Now, whenever I walk into a room, my friends tease me about being The Mr. Nice Jewish Boy of D.C. But I’m really glad I took this opportunity.”