Sam Brownback could be Trump’s most anti-gay appointee yet

By John Riley on August 1, 2017 @JohnAndresRiley 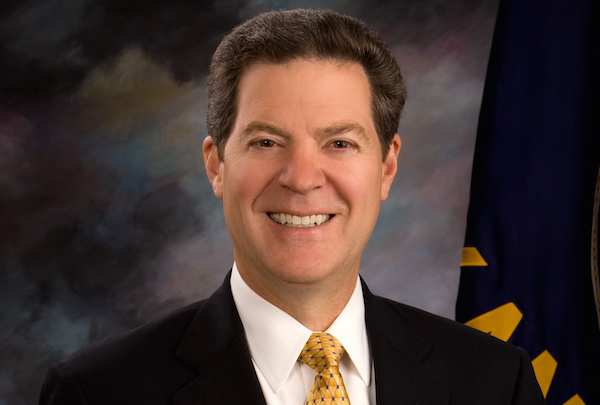 Since winning election last November, President Trump has nominated or named a host of new government appointees, including many with anti-LGBTQ views or records.

That’s not exactly a surprise, given the sway that religious conservatives hold over many Republican Party base voters.

But for all of the LGBTQ community’s concerns about Education Secretary Betsy DeVos, Attorney General Jeff Sessions, HUD Secretary Ben Carson, or Energy Secretary Rick Perry, the nation has yet to see a Trump nominee so fiercely and viciously anti-LGBTQ as Kansas Gov. Sam Brownback.

Even appointees who have engaged in inflammatory anti-transgender rhetoric pale in comparison to Brownback, who has been tapped to head the State Department’s Office of International Religious Freedom.

Not only has he left a paper trail of anti-LGBTQ pronouncements dating back to his days as a U.S. senator, a GOP presidential candidate, and as governor, but Brownback also has a record of seeking to make his anti-LGBTQ views official government policy.

Brownback’s nomination has been overshadowed by the breaking news of the day, including Trump’s proposed ban on allowing transgender military members to serve in the Armed Forces and the Justice Department stating that LGBTQ people are not entitled to protection under the Civil Rights Act.

But a clearer look at Brownback’s record should leave many concerned that he’s now expected to be the emissary tasked with promoting religious freedom and religious tolerance (at least for Christians) abroad.

Brownback, who converted from evangelical Christianity to Catholicism in 2002 and is reportedly a member of the ultra-conservative Opus Dei sect, has reserved some of his most venomous rhetoric for same-sex marriage.

He’s called marriage equality “radical social experimentation” and said that its existence is “harmful to the future of the Republic.”

As a senator, Brownback cosponsored an amendment to the U.S. Constitution that would have banned same-sex marriage nationwide. He has contended that allowing same-sex couples to wed will force marriage rates to decline among heterosexual people, because they will no longer see marriage as a sacred institution reserved for one man and one woman.

Brownback also voted against LGBTQ hate crimes legislation, arguing that penalizing those who target LGBTQ people with violence would lead to abridging the First Amendment rights of people opposed to homosexuality.

He temporarily blocked the confirmation of a federal judge solely because she attended a same-sex couple’s commitment ceremony. And he voted against repeal of the military’s “Don’t Ask, Don’t Tell” policy preventing gay, lesbian, and bisexual soldiers from serving openly.

As governor, Brownback rescinded a previous executive order by Gov. Kathleen Sebelius (D) that protected LGBTQ state workers from being discriminated against, harassed or fired without cause just because of their sexual orientation or gender identity.

He also opposed President Obama’s guidance to public schools asking administrators to treat students according to their gender identity, including allowing them to use facilities that match that gender identity.

Last year, Brownback signed a “religious freedom” law that allows groups at college campuses to exclude LGBTQ students from joining based on other members’ religious objections to homosexuality, without fear of losing public funds.

The American Civil Liberties Union of Kansas issued a statement summing up their view of how Brownback has served as governor, saying “we look forward to working with current Lt. Gov. Jeff Colyer to advance and strengthen civil liberties in Kansas.”

“The ACLU takes no position — either in support or opposition — on presidential nominations of any kind, including this one. However, we feel compelled to note that throughout his tumultuous tenure, Gov. Brownback worked tirelessly to erode the protections that the First Amendment affords for the separation of church and state,” the statement reads. “More troubling, Gov. Brownback has been one of the nation’s leading proponents of the notion that people, businesses, and even governments should be able to discriminate against others because of their own religious beliefs.

“Given Gov. Brownback’s record of steadfast opposition to equal rights for LGBT Americans — and his wrong-headed insistence that discrimination is justified by religious belief — the nomination should be considered a further indication of the Trump Administration’s approach to equality.”

In short, if the trickle of prior Trump nominees with anti-gay records was equivalent to a gradual bloodletting by leeches, nominating Brownback could be compared to ripping open the skin and rubbing salt on the exposed area.