By John Riley on September 21, 2017 @JohnAndresRiley 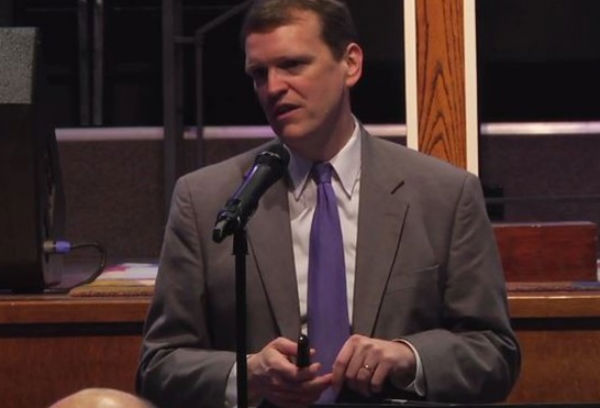 Jeff Mateer – Photo: “The Church and Homosexuality,” via Vimeo.

Jeff Mateer, Donald Trump’s nominee for the U.S. District Court for the Eastern District of Texas, once described transgender children as part of “Satan’s plan.”

In a pair of 2015 speeches, Mateer, the first assistant attorney general of Texas, bemoaned the trend of states banning conversion therapy for LGBTQ minors, denounced transgender rights, and alleged that allowing same-sex marriage would lead to efforts to legitimize polygamy and bestiality, reports CNN.

In a May 2015 speech titled “The Church and Homosexuality,” Mateer discussed a lawsuit in Colorado where parents of a transgender first-grader sued her school to allow their daughter to use the girls’ bathroom.

“Now I submit to you, a parent of three children who are now young adults, a first grader really knows what their sexual identity?” Mateer said. “I mean it just really shows you how Satan’s plan is working and the destruction that’s going on.”

Mateer previously served as general counsel of the First Liberty Institute, a conservative advocacy group that has been involved in pushing anti-LGBTQ initiatives or opposing expansions of LGBTQ rights, such as passage of a nondiscrimination ordinance in Plano, Texas.

In November 2015, Mateer was speaking at a conference hosted by controversial anti-LGBTQ pastor Kevin Swanson, during which he took issue with attempts to ban conversion therapy in New Jersey and California.

“Biblical counselors and therapists, we’ve seen cases in New Jersey and in California where folks have gotten in trouble because they gave biblical counseling and, you know, the issue is always, it’s same sex,” he said. “And if you’re giving conversion therapy, that’s been outlawed in at least two states and then in some local areas. So they’re invading that area.”

Unsurprisingly, Mateer, who must be confirmed by the U.S. Senate, is facing criticism for his anti-gay statements.

“President Trump has once again demonstrated his complete disregard for the LGBT community by nominating a person to the U.S. District Court for the Eastern District of Texas who opposes LGBT rights and dignity,” David Dinielli, deputy legal director at the Southern Poverty Law Center, said in a statement. “The nominee’s past statements prove that he cannot and will not rule fairly on issues affecting the LGBT community.

“Jeff Mateer has demonized the most vulnerable members of our community and expressed support for conversion therapy — the dangerous, fraudulent, discredited and inhumane practice that purports to change a person’s sexual orientation or gender identity.There is no place on our federal bench for people who harbor this sort of extreme and dangerous bias.”

“These comments made by a Trump nominee reflect a hostility toward transgender people that is deeply disturbing. There is no room for this sort of vitriol in our public discourse,” added Shannon Minter, legal director of the National Center for Lesbian Rights. “Our government must stand for  inclusion and fairness for all, and we will speak out against efforts to turn back the clock on equality.”

“It’s concerning that the Trump Administration is trying to infuse its anti-transgender ideology into our judicial system,” Jennifer Levi, transgender rights project director at GLBTQ Legal Advocates & Defenders, said in a statement. “Our courts must serve as a backstop to President Trump’s divisive and exclusionary policies, not promote discrimination. Courts must treat all Americans fairly and promote equal rights.”

John Riley is the local news reporter for Metro Weekly. He can be reached at jriley@metroweekly.com
← Previous Story Two trans women challenging Iowa’s ban on Medicaid coverage for surgery
Next Story → New antibody breakthrough could lead to HIV vaccine