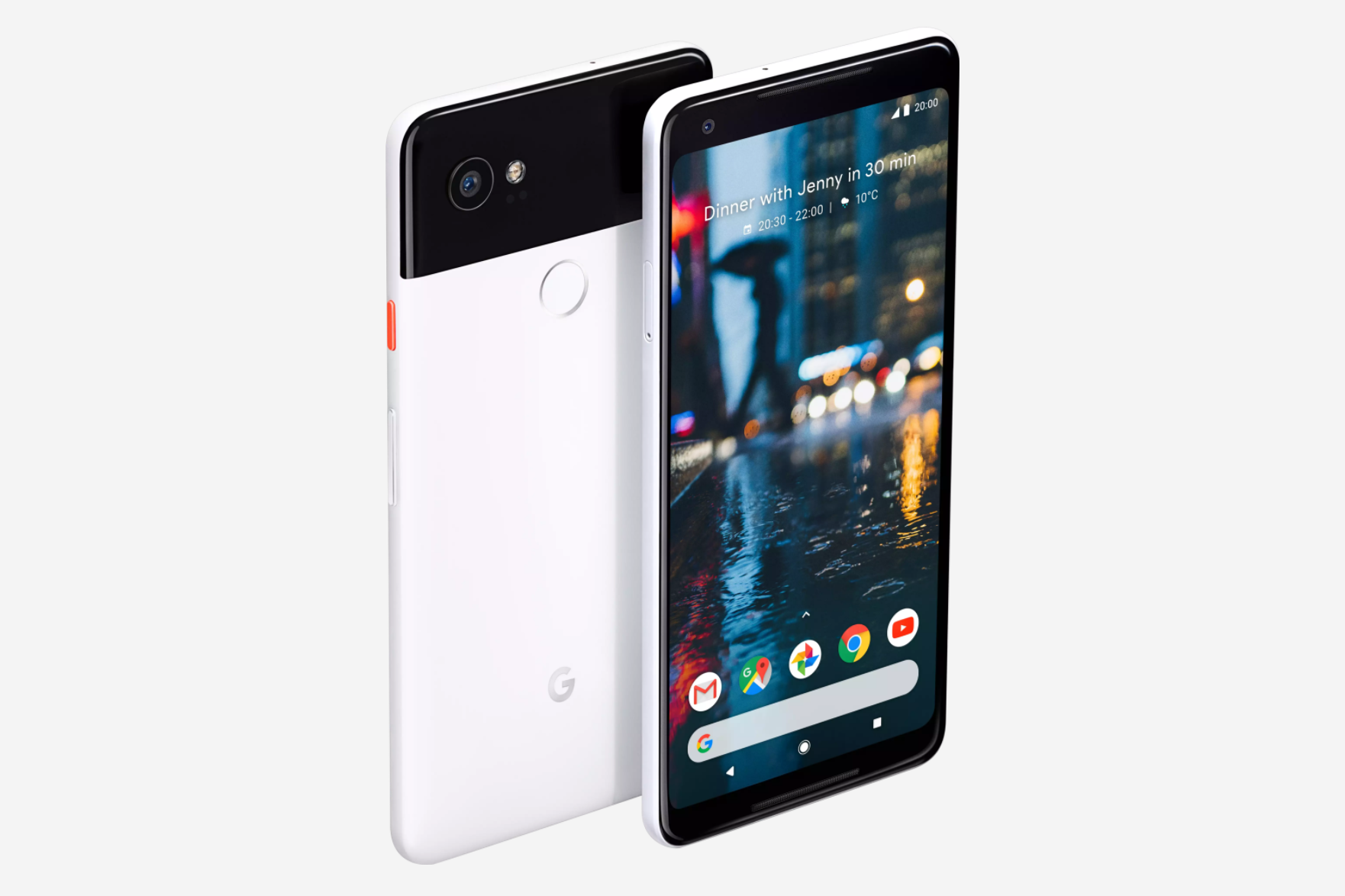 At the launch of last year’s Pixel phones, I wrote that Google had “declared war” on Apple and Samsung by designing its own smartphone. No longer content with letting other manufacturers shoehorn its Android software into their devices and fill them up with bloated software or mediocre hardware, Google instead decided to show everyone what a true Android phone should look like.

The results, to put it mildly, were astonishing. The Pixels, apparently hastily thrown together by HTC working on a limited timeframe, weren’t the most beautiful of smartphones. But looks were deceiving. Instead, the Pixel was comfortable and light, with a long-lasting battery, beautiful OLED screen and buttery smooth, stable software. It was a marriage of software and hardware unmatched in the Android world at the time — Google turned to Samsung’s Galaxy devices and said “No, we’re the real iPhone rival.”

And that was all before people started using the Pixel’s camera. While pretty average on a specs sheet, it used machine learning, incredibly clever software, and ludicrously advanced HDR layering to produce the best images of any smartphone at the time. It was so impressive that DxOMark, considered the benchmark for smartphone cameras, gave the Pixel its then highest-ever rating.

Flash forward to 2017 and we’re in a very different smartphone world. Samsung finally allowed its design skills to catch up with its marketing budget, producing the Galaxy S8 and Galaxy Note 8, devices with tiny bezels, curved screens and gorgeous glass and metal exteriors. The Note 8 even introduced the company’s first-ever dual-camera setup, designed to compete with Apple’s Portrait mode on the iPhone.

Apple, too, hasn’t been resting on its laurels. While the iPhone 8 was iterative more than revolutionary, November will bring the iPhone X, an almost all-display sandwich of glass and aluminum, costing $1,000 and designed to celebrate ten years of the fruity company’s mobile efforts. It’s everything Apple has learned in a decade of iPhones crammed into one halo device. 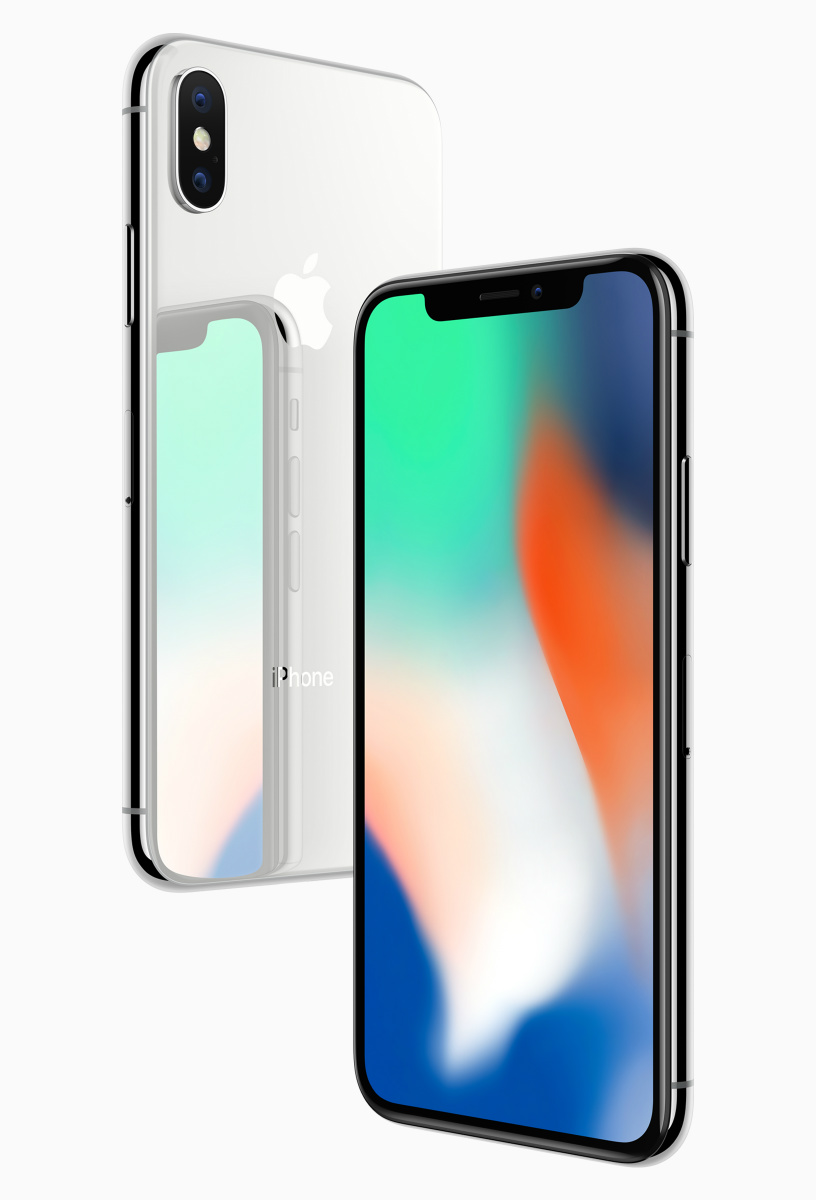 It’s why this week’s announcement of the Google Pixel 2 and Pixel 2 XL seems initially staid in comparison. The smaller Pixel 2 looks pretty similar to last year’s model, with its big bezels and 5-inch display. The larger Pixel 2 XL offers the small bezels and giant screen of the Note 8 and iPhone X, but without all the flashy bells and whistles. They’re designed to be functional, manageable, easy to use. But when we’ve reached the point of $1,000 phones that revel in being ludicrously fragile, does anyone really want functional?

Actually, yes, if Google are to be believed. These Pixel phones, just like last year, are more than the sum of their parts. On paper, there’s little to distinguish them from every other Android flagship — the latest processor, big batteries, fast charging, water resistance (something last year’s model lacked). Instead, these new Pixels shine when viewed collectively. They’re taking Google’s machine learning prowess, Android refinements, and camera wizardry to new heights.

Almost everything about the Pixel has been subtly improved. The single, weak speaker has become dual front-facers, designed to provide clearer, louder audio. There’s better microphones, to better facilitate voice search queries. The screens are OLED and always-on, showing notifications and information at a glance. Both Pixels will now listen for any music in your location, showing the artist on the lock screen and all without using any of your data. The rear-mounted fingerprint scanners are faster than any other smartphone — and they were already among the fastest and most accurate out there.

And there’s more. The sides of the phone have an “Active Edge” feature, borrowed from HTC, which lets users squeeze the sides of the phone to launch Google’s Siri-rivalling Assistant. Speaking of which, Assistant can now interface better with Google’s Amazon Echo-rivalling Home speakers, as well as offer contextual results — tell her you want to drive home and she’ll offer directions, travel times, updates on events, and resume your music from where you left off. There’s also a Lens feature, which will scan objects in the real world and offer information or actions: Scan a flyer and Assistant will save a phone number or email, as well as details, for later reference. Scan a singer’s photo, and Assistant will tell you who it is and link to their music. You can even scan WiFi passwords to automatically add them — no more looking at the router and awkwardly tapping on screen. 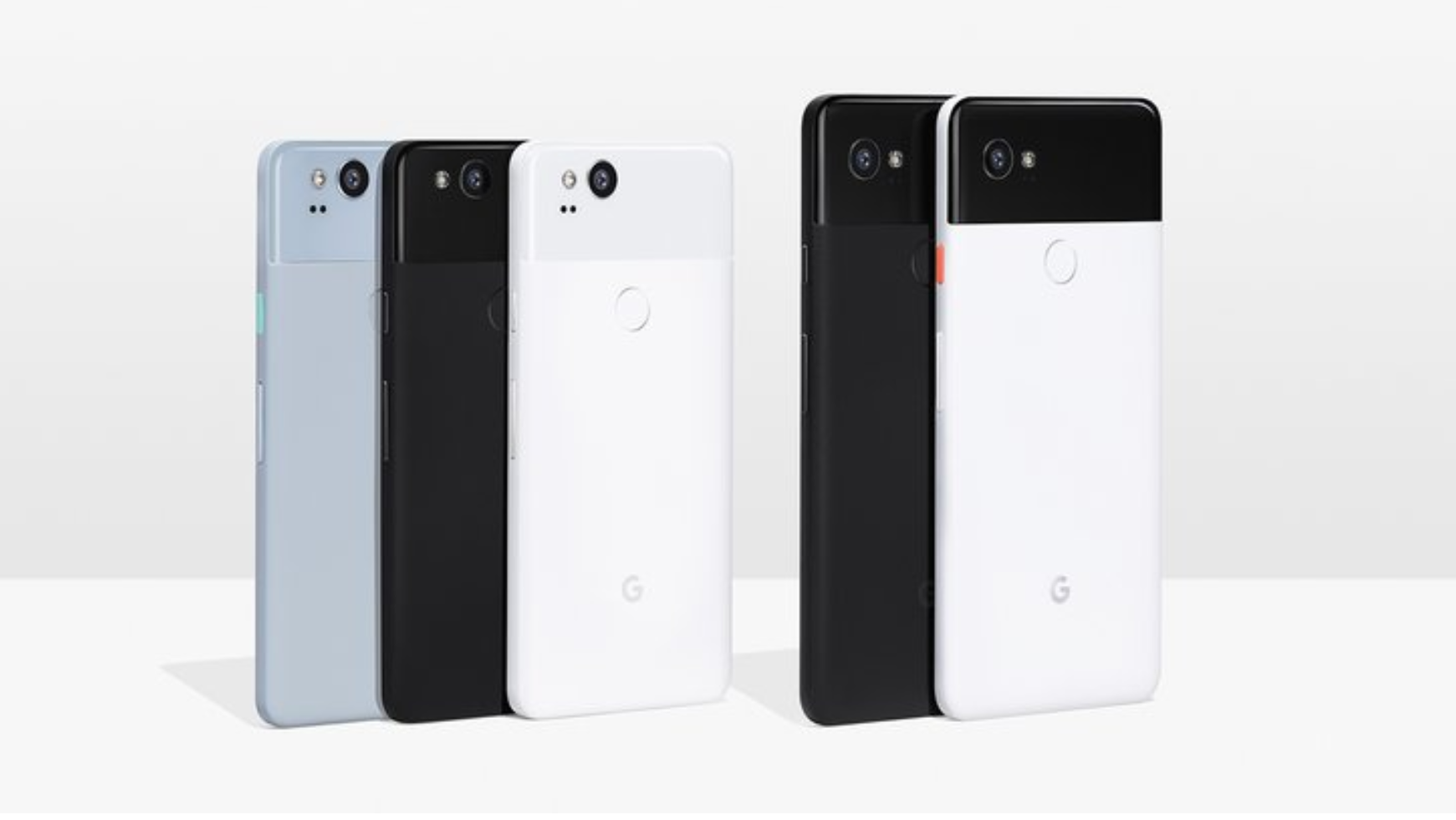 The full specs rundown is pretty straightforward. Apart from a 5-inch, 1080p screen on the Pixel 2 and a 6-inch, 2880 x 1440 screen on the Pixel 2 XL, both phones have feature parity — something Google noted in a shady dig at Apple about reserving features for the larger device. There’s a Snapdragon 835 processor, 4GB of RAM, 64 or 128GB of storage, an 8 megapixel front camera and a 12.2 megapixel rear camera.

Yes, that’s just one rear camera. It’s here that Google is really proving its software-focused ethos compared with Apple and Samsung. Apple controls both hardware and software, custom designing the way its camera operates to get the best image possible. Samsung brute forces its way to camera brilliance with excellent hardware and custom tweaks to Android. Both now have dual cameras, enhanced zoom, Portrait modes for DSLR-style background blurring, and great image quality.

Google is taking a different route. Its camera hasn’t massively changed since 2016’s Nexus 6P. There’s been a few changes — dual pixel sensor, bigger f/1.8 aperture, optical image stabilization — but ostensibly this is the same 12 megapixel offering. What’s different is the way Google utilizes its camera. Samsung and Apple had massive head starts when it came to refining the way their phones took photos, but last year’s Pixel bested both. How? With software.

Google gave its camera an Auto HDR ability that let it snap multiple images almost instantly, combining them into dynamic, rich photos that pulled every ounce of detail out of a scene, regardless of light or location. And it worked. Practically every time, without fail, the Pixel could deliver an amazing image. 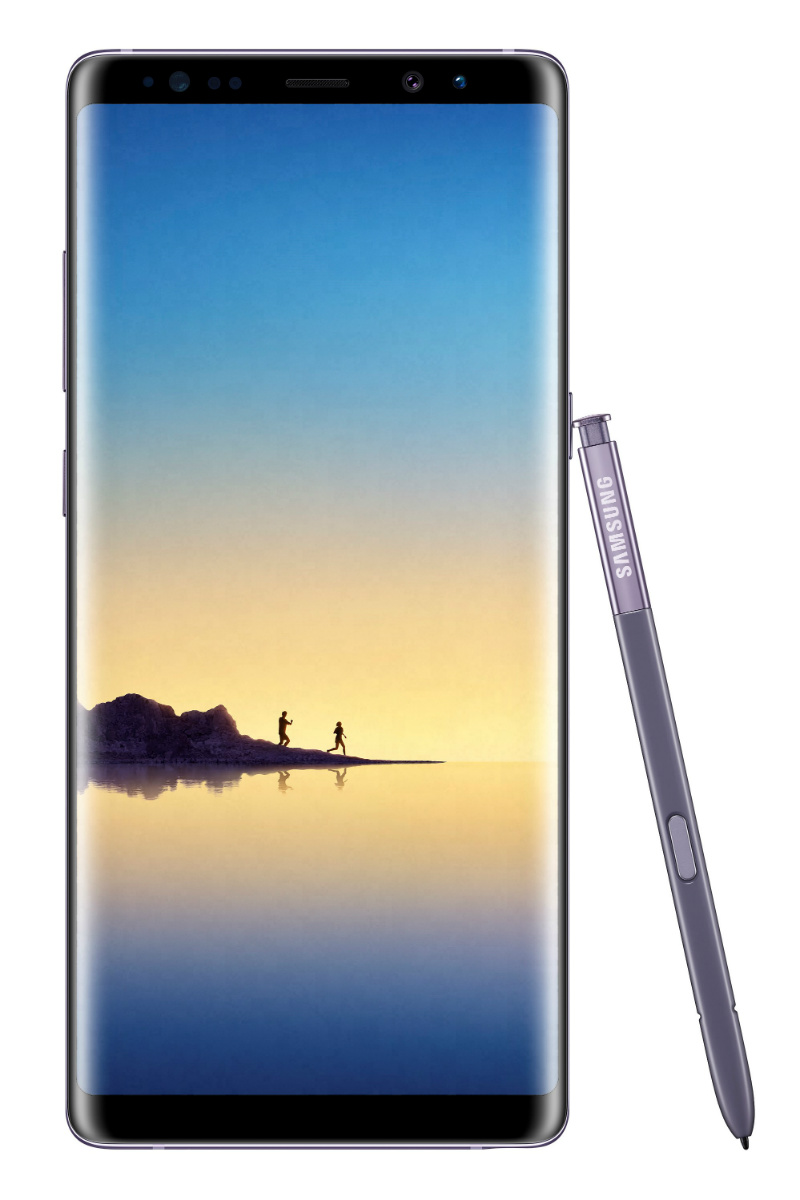 Software had beaten both Apple and Samsung at a game they’d long been champions of. It’s why the launch of the iPhone 8 — and, presumably the iPhone X, which has largely the same dual camera setup, save for a few tweaks — was a great moment for Apple. DxOMark had changed their tests, favoring phones that could zoom well and produce pleasing “bokeh” shots in portraits. The new iPhone 8 was subsequently crowned king, with a highest-ever score of 94 out of 100. Unfortunately, its glory was short-lived. Twelve days later, Samsung’s Note 8 was also rated 94. The iPhone handled video better, the Samsung, photos. Regardless, once again, Apple and Samsung ruled smartphone imagery.

With its single camera and reliance on software, how could Google compete? Pretty well, apparently. With a seemingly endless pause after mentioning last year’s rating, the search giant announced that DxOMark had reviewed the Pixel 2’s camera ahead of its announcement. The result: 98. The best ever camera — again.

What’s most impressive is how well Google is marrying hardware and software with the company’s impressive machine-learning. Google trained its camera on a million photos to learn how to detect the layers of an image, the subject, and how to blur the background around them without crushing details or obscuring fine items like strands of hair. The result is a Portrait mode to rival the iPhone, but without the camera bump or second sensor of Apple or Samsung’s devices. The software is even smart enough to do Portrait mode-style images with the single front camera. Selfies will never be the same again. And it’s all backed up with free, unlimited storage for photos and videos on Google Photos. Cue another shady dig from Google at Apple’s iCloud service.

And, much like Apple, Google is pushing Augmented Reality with the launch of Stickers. Demoed with a Stranger Things pack, which saw Eleven and the Demogorgon join Google’s employees on stage, AR Stickers are coming from a number of companies and can be used in both photos and videos — an animated coffee cup, for instance, to spice up that Instagram image of your Starbucks. Cute, yes, but also a nice demonstration of Google’s software prowess, as the Stickers are context aware and able to detect other people and objects around them. 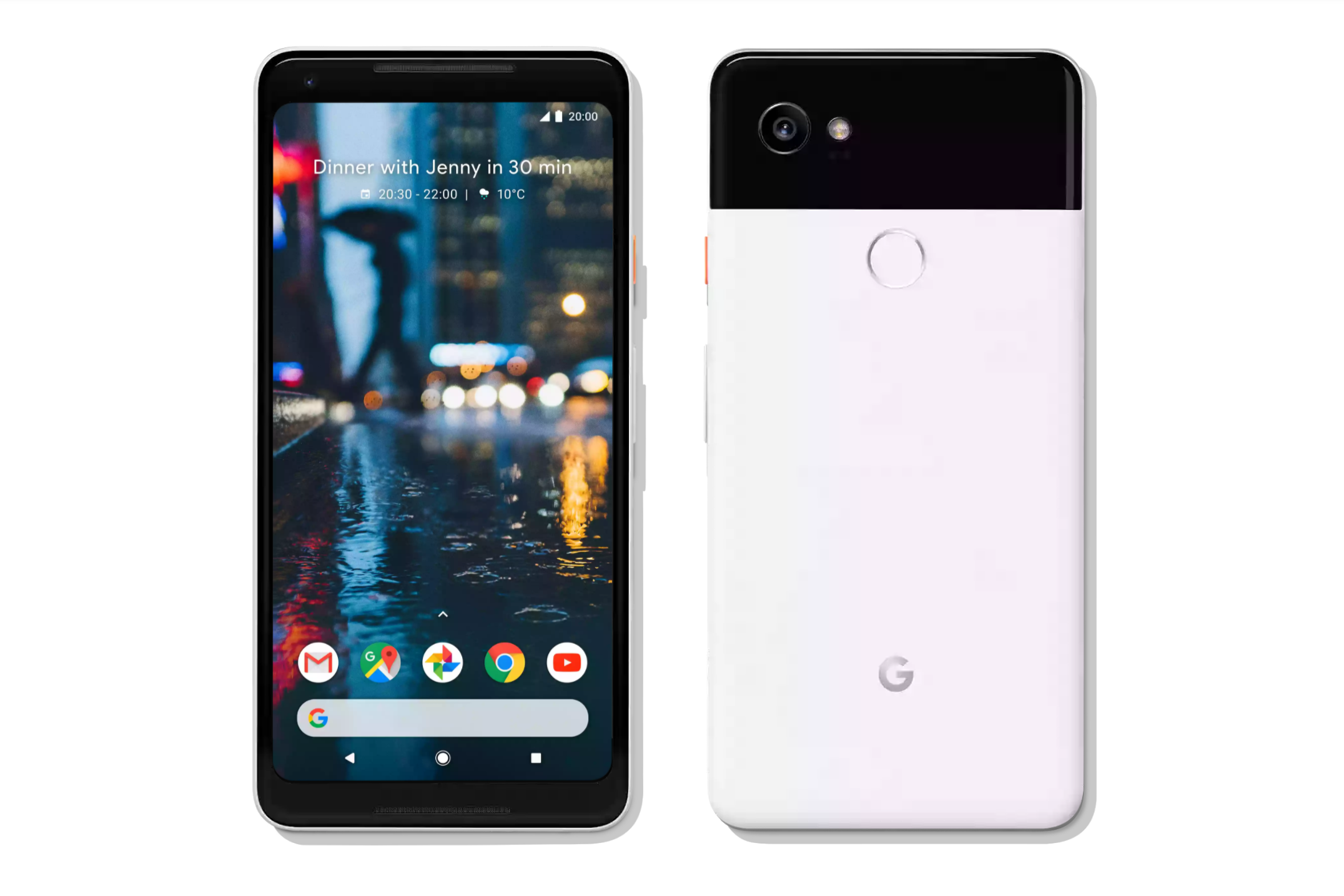 All of this, though, won’t do much to entice iPhone and Galaxy buyers without a giant marketing campaign. The beauty of last year’s Pixel devices wasn’t in the phones themselves, but in the process of actually using them, experiencing their smooth software, their camera prowess, their timely OS and security updates. The Pixel 2 is more of the same, but with fewer niggles. Improved build, refined software and UI, better camera, a more modern design on the larger XL. But ease-of-use and iterative improvements aren’t as easy to quantify in an advert as Apple’s flashy $1,000 iPhone X, or Samsung’s slim, pen-toting Note 8.

The test for Google will be in convincing buyers that they’re better off spending $649 on a Pixel 2 or $849 on a Pixel 2 XL (add $100 for double the storage on both). To choose phenomenal software and camera trickery over flashy chrome and glass. To try out the machine-learning and proficient coding that sits inside both phones, rather than succumb to Apple or Samsung’s massive advertising budgets.

Can they do it? It’s debatable, but for anyone intrigued, you won’t have to wait long to find out — the Pixel 2 starts shipping later this month.

Google’s Pixel 2 and Pixel XL are available to preorder now from Google’s online store. For a limited time, every purchase of a Pixel 2 or Pixel 2 XL comes with a free Google Home Mini.

Rhuaridh Marr is Metro Weekly's online editor. He can be reached at rmarr@metroweekly.com.
← Previous Story Yelp: More than 160,000 businesses have gender-neutral restrooms
Next Story → Apple celebrates same-sex marriage in Australia with new ad