By John Riley on October 12, 2017 @JohnAndresRiley 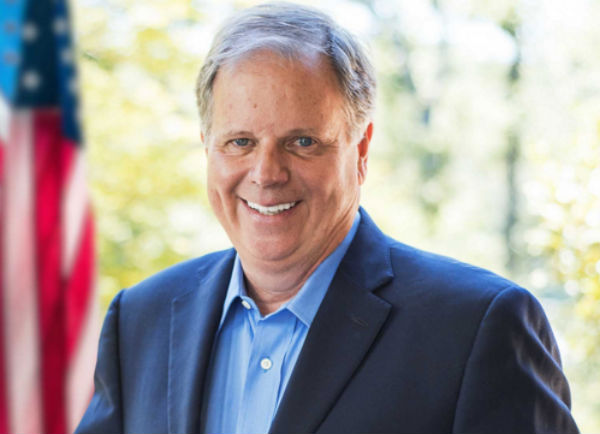 Jones, a former U.S. Attorney for the Northern District of Alabama, is best known for prosecuting two Ku Klux Klan members involved in the 1963 bombing of the African-American 16th Street Church in Birmingham, which killed four African-American girls and became an historic event in Civil Rights Movement.

Jones faces off against the vehemently anti-LGBTQ former Alabama Supreme Court Justice Roy Moore for the seat once held by U.S. Attorney General Jeff Sessions. Moore ousted U.S. Sen. Luther Strange (R), the former state attorney general, in the Republican primary. Strange was hampered by having been named to the seat by former Gov. Robert Bentley (R), who lost favor with voters after he was forced to resign following a sex and ethics scandal.

The fact that HRC prefers Jones to Moore isn’t at all surprising, but there had been questions about whether the organization would officially endorse Jones, who is generally more conservative-leaning than the national Democratic Party, or whether it would issue no endorsement and focus its efforts on attacking Moore.

“Doug Jones has pledged to serve all Alabamians, including LGBTQ people,” Eva Kendrick, state director of HRC Alabama, said in a statement. “In this election, the choice between Roy Moore and Doug Jones could not be more stark. Moore has never passed up an opportunity to promote bigotry, division and extremism,  while Doug Jones has staked his career on fairness, equality and a positive vision for Alabama’s future.”

Moore is a known quantity to the LGBTQ community, largely stemming from his two terms as Chief Justice of the Alabama Supreme Court. During his first term, in 2003, Moore was removed from office after he defied a federal judge’s order to remove a Ten Commandments monument from the state judicial building.

After running and winning election to his old seat in 2012, Moore again courted controversy in 2016 when he ordered probate judges to continue enforcing Alabama’s ban on same-sex marriage, even though the ban had been found unconstitutional by the U.S. Supreme Court. Moore, who has been vocal in his opposition to the Supreme Court’s ruling, was later found guilty of violating judicial ethics in order to circumvent a ruling with which he disagreed. He was was suspended without pay for the remainder of his six-year term, and, due to state laws limiting the age of judges to under 70, is not eligible to sit on the Alabama Supreme Court ever again.

Moore, who sees a stint in the Senate as the perfect chance to continue his political career, has a history of making anti-LGBTQ statements. He has said that homosexual conduct should be made illegal, and even suggested that he holds views similar to those of Russian President Vladimir Putin when it comes to limiting freedoms and rights enjoyed by LGBTQ people.

President Trump, who endorsed Strange in the Republican primary, has since switched to supportin Moore in the general election, though White House Press Secretary Sarah Huckabee Sanders attempted to distance the president from Moore’s more controversial statements, saying that Trump does not agree with all of Moore’s views, specifically on LGBTQ rights.

Unfortunately, recent polling shows Moore is favored to win the Senate election on Dec. 12, holding anywhere from a six- to eight-point lead among likely voters, though his level of support is below 50 percent. An upset by Jones is highly unlikely, particularly given Moore’s lead among white voters and voters over the age of 50, but the Democrat is already polling higher and expected to gain more votes than most Democrats typically do in statewide races — perhaps a testament to the polarizing nature of Moore’s candidacy.

Despite the general unpopularity LGBTQ rights in Alabama, Jones has continued to advocate for equal rights for all people.

“I have fought for the rights of all Alabamians and all Americans my entire career and will continue to do so as U.S. senator,” Jones said in response to HRC’s endorsement. “We must continue to push for equality and fight hate and discrimination in all forms.”

John Riley is the local news reporter for Metro Weekly. He can be reached at jriley@metroweekly.com
← Previous Story Trump’s ACA executive order could undermine LGBTQ health care
Next Story → Atlanta mom freaks out after daughter taught about gay people