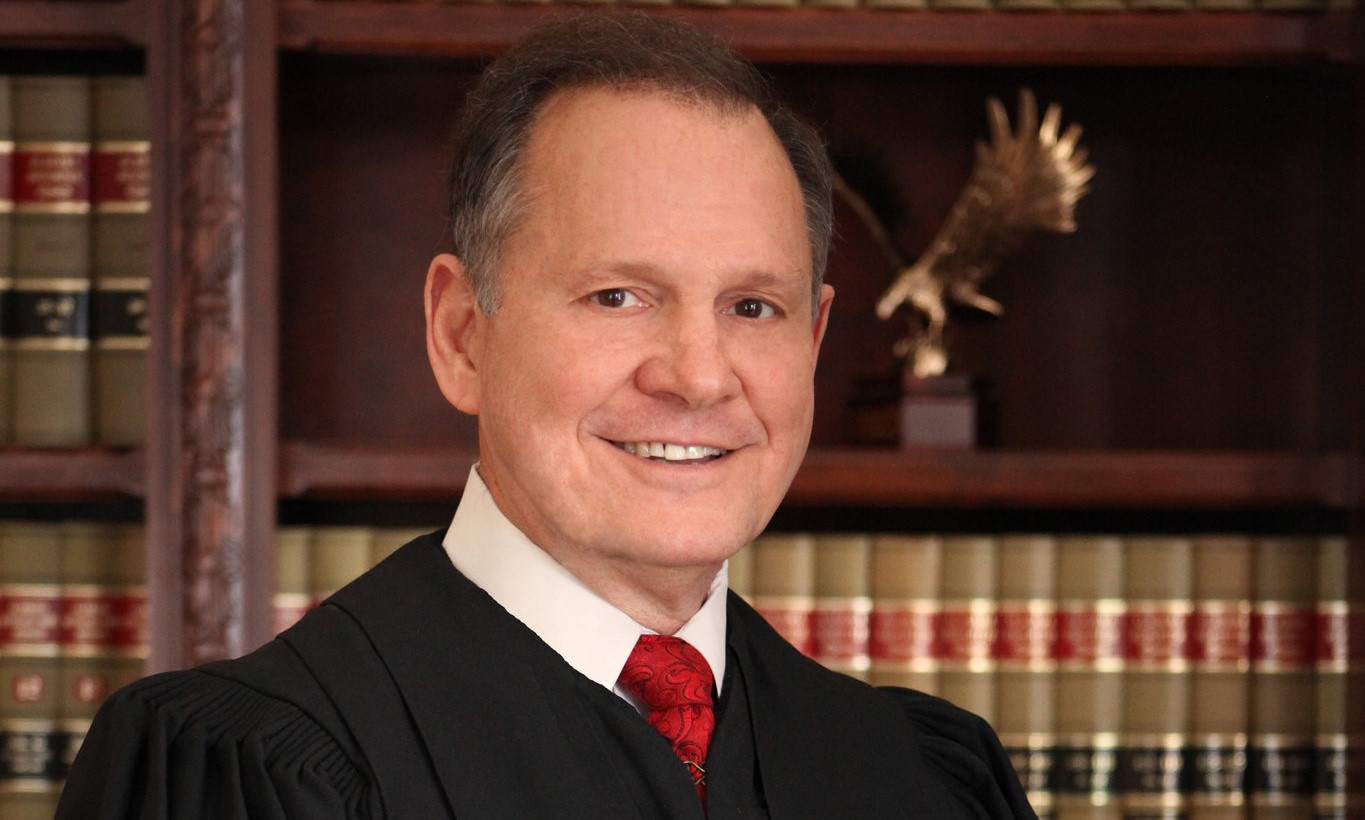 Alabama’s Republican Senate nominee and notorious homophobe Roy Moore believes that the Supreme Court ruling in favor of same-sex marriage was “even worse” than when it supported slavery in 1857.

Moore, who was removed from office as Alabama’s Supreme Court Chief Justice for trying to avoid issuing marriage licenses to same-sex couples, made the comments in a 2016 interview that was recently discovered by Talking Points Memo.

Moore told the Here I Stand podcast that the Obergefell decision in 2015, which legalized same-sex marriage nationwide, was less favorable than the infamous Dred Scott ruling from 1857, which saw the court rule that African Americans were property and not citizens.

“In 1857 the United States Supreme Court did rule that black people were property,” he said. “Of course that contradicted the Constitution, and it took a civil war to overturn it. But this ruling in Obergefell is even worse in a sense because it forces not only people to recognize marriage other than the institution ordained of God and recognized by nearly every state in the union, it says that you now must do away with the definition of marriage and make it between two persons of the same gender or leading on, as one of the dissenting justices said, to polygamy, to multi-partner marriages.

“We’ve got to go back and recognize that what they did in Obergefell was not only to take and create a right that does not exist under the Constitution,” he continued, “but then to mandate that that right compels Christians to give up their religious freedom and liberty.”

Moore’s comments echo those made by former presidential candidate and U.S. Sen. Rick Santorum (R-Pa.), who made the comparison between the Obergefell and Dred Scott cases during a debate in August 2015. Asked by the moderator if he thought legalized same-sex marriage was “settled law,” Santorum responded that it was not, “anymore than Dred Scott was settled law to Abraham Lincoln, who in his first inaugural address, said, ‘It won’t stand.'”

This is not Moore’s first time engaging in gross hyperbole on the issue of marriage equality. In a September 2015 speech to the anti-LGBTQ Eagle Forum, Moore claimed that Christians were being persecuted for their views opposing same-sex marriage, comparing such “victims” of same-sex marriage to Jews killed in the Holocaust.

“We’re going through something in our country that other countries have gone through,” Moore said. “Germany went through it when the state took all power.”

To drive home the comparison, Moore paraphrased Martin Niemöller’s famous poem “First they came…,” which addresses the silence of the German public during the Holocaust.

That same year, in another interview, Moore made an almost identical comparison to the Holocaust, implying that he should have the right to disobey the Supreme Court’s ruling if he believes it to be wrong and immoral.

“Could I do this if I were in Nuremberg [war crimes trials of German officers following World War II], say that I was following the orders of the highest authority to kill Jews?…Could I say I was ordered to do so?”

When told by the interviewer that Nuremberg was about killing human beings, and not same-sex marriage, Moore responded flippantly: “Is there a difference?”

Just a few months later, Moore issued an order reminding probate judges that an Alabama Supreme Court ruling against same-sex marriage was still in effect, despite the Supreme Court’s decision in the Obergefell case.

Moore urged probate judges to defy the ruling and to refuse to grant licenses to same-sex couples, an action that eventually led to him being effectively removed from office in 2016 after he was suspended for the remainder of his six-year term as Alabama’s Chief Justice.

John Carroll, a lawyer for the Judicial Inquiry Commission that eventually penalized Moore for his actions, said at the time, “He was on a mission not to recognize federal law on same-sex couples.”

In 2015, he argued that courts had no right to “redefine” marriage, saying, “No court has any authority to redefine what God proposed in Genesis. The definition of marriage, you want it by man, it doesn’t come by man, it comes from God.”

Moore has repeatedly stated that homosexuality should be illegal, saying as much in two separate interviews in 2005 and 2015.

He also once wrote in a court opinion that homosexuality is a “criminal lifestyle,” an “inherent evil against which children must be protected,” and “abhorrent, immoral, detestable, a crime against nature, and a violation of the laws of nature and of nature’s god upon which this Nation and our laws are predicated.”

He has compared homosexuality to bestiality, polygamy and incest, criticized same-sex couples who undergo artificial insemination, and has supported banning all LGBTQ people from serving in the U.S. military.

“Roy Moore keeps getting fired from jobs yet he continues to ask the people of Alabama for a promotion. Despite being removed from office twice for ethical violations, Roy Moore has succeeded in becoming the Republican nominee for U.S. Senate,” Eva Kendrick, HRC’s Alabama state director, said in a statement earlier this year after he won the GOP nomination to run for the Senate in 2018.

“Given Roy Moore’s track record of flouting laws and attacking the civil rights of LGBTQ people across our state, we already know he won’t stand up for all Alabamians when it matters most. In the run up to December 12, we urge every fair-minded person across Alabama to say #NoMoore and reject the politics of bigotry and hate.”