LGBTQ issues received the short shrift at this year’s CPAC, as full inclusion of queer conservatives continues to slowly grow.

By John Riley on February 28, 2018 @JohnAndresRiley 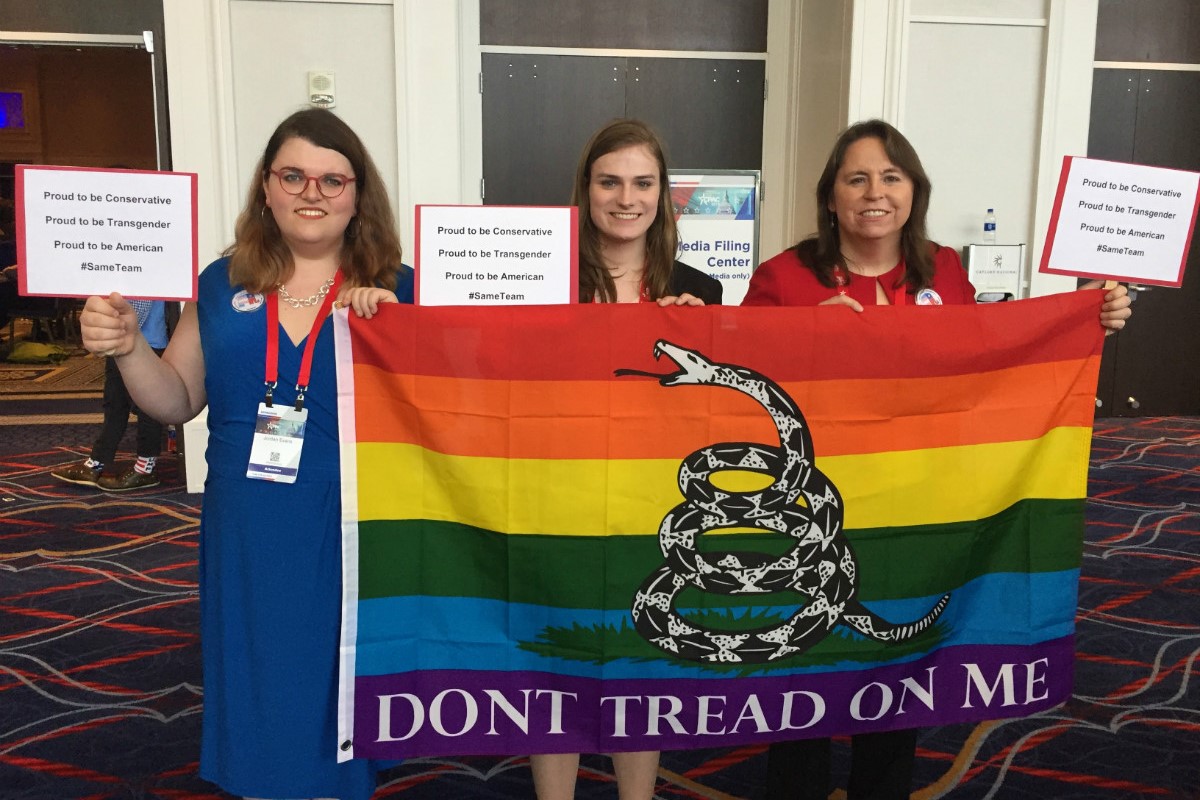 The Conservative Political Action Conference used to be filled with social conservatives openly ranting about the “gay agenda.” The presence of groups like MassResistance, the National Organization for Marriage, and Americans for Truth About Homosexuality at the annual gathering was widely highlighted by mainstream media — and lampooned by liberals who smirked as they aired video clips of earnest attendees offering up outlandish quotes about the dangers posed by same-sex marriage or allowing gay people to serve in the military.

That was then. Those walking caricatures of conservatives have largely vanished from CPAC, which seems to have adopted an agnostic approach to addressing the topic LGBTQ rights. While many of the prominent guests and speakers may hold anti-LGBTQ views, very few spent time or political capital talking about them from the conference’s main stage last week.

The “gay-haters” have been replaced by conservatives who choose to focus their efforts on advocating for spending priorities or decreasing the level of government interference in people’s lives.

“This weekend was more about actual policy rather than just stupid little fights.” — Sriraam Mehtalia

“I like how this weekend was more about actual policy rather than just stupid little fights, like with the media about political correctness,” says Sriraam Mehtalia, a 19-year-old Californian who traveled to CPAC from Boston with fellow members of the Northeastern University College Republicans. “It was actually about the economy and national security, and I like that.”

Indeed, at CPAC — and particularly in the age of Donald Trump, whose campaign for the White House eschewed political correctness in favor of appealing to the average, non-political American voter — social issues like abortion or gay marriage are more of an afterthought. Tax cuts, gun rights, cutting regulations, and curbing illegal immigration are the prime time topics of the day.

Even President Trump, who addressed the conference last Friday, refrained from mentioning his administration’s efforts to curb LGBTQ rights — a trend replicated elsewhere at CPAC. None of the major speakers, even known social conservatives like Vice President Mike Pence and Education Secretary Betsy DeVos, mentioned same-sex marriage or made veiled references to “religious liberty,” a phrase often interpreted as code for allowing discrimination based on a person’s opposition to homosexuality or same-sex marriage.

But the lack of emphasis on LGBTQ issues doesn’t mean there wasn’t a substantial LGBTQ presence at the conference. Outside the main hall, a group of transgender women had organized a small demonstration, holding up a rainbow Gadsden flag and signs proclaiming “Proud to be conservative. Proud to be transgender. Proud to be Americans. #SameTeam.”

One of the organizers was Jennifer Williams, a transgender Republican and self-described “Gen X-er” from Trenton, N.J., who was attending her tenth CPAC overall, and her third since coming out. Williams had a goal of having several thousand attendees see the flag and signs, in order to spark needed conversations about transgender and LGBTQ inclusion in the conservative movement.

“It was a very conscious decision, particularly in this year, 2018, where we’ve had the administration for almost a year-and-a-half at this point. And things in many ways haven’t gone the way we wanted for the entire LGBT community,” says Williams, referring to several policies that have restricted transgender rights and several appointees to the federal bench or cabinet agencies who have expressed anti-LGBTQ attitudes.

“One of the ways to maybe fix that in the future, or at least maybe negate any future things happening, is to be in this space as transgender women. We wanted to be in the same space to show our fellow conservatives, we’re in your family, too. We’re on your side, too. And you shouldn’t be coming after the transgender community and the greater LGBT community, because you’re hurting your own people.”

Williams and her fellow transgender conservatives are open to having respectful conversations with CPAC attendees in the hopes of changing hearts and minds — or, in some cases, simply educating people about what it means to be transgender.

“We’re in the space, showing our faces, we’re unafraid, we’re proud of who we are, and we’re going to make sure that you know we exist,” she says. “We’re not a myth that you saw on television or some left-wing conspiracy that you read about on the Internet. We’re live and we’re in the flesh.

“At least when you talk to us, you’re going back home to wherever you live with real information…and you can share, ‘I went to CPAC and I met these really cool, smart transgender women. I learned a lot. I may not agree with them yet. But you know what? They’re not what I saw on Jerry Springer. They’re good people, too. Maybe we should think about this.’”

Jordan Evans, an elected Republican town constable and library trustee from Charlton, Mass., notes that a similar demonstration held last year was overshadowed by the Department of Education’s decision to rescind Obama-era guidance advising schools to treat transgender children according to their gender identity.

“This CPAC, it’s a little bit different,” she says. “The conversations we’ve been having are a lot more authentic. People have a lot more questions for us that don’t just pertain to current events. They’re actually interested in these deep, human connection-level conversations that I’ve really wanted us to be having from the start.

“Admittedly, not all of them have gone as well as I would have hoped, but the discourse has been so civil. Even when we had differences, we’ve still managed to find common ground. I want to give them an opportunity to talk to real trans people like us, because a lot of people don’t have any genuine, sincere interactions with trans people except what they see in the media or based on hearsay. We have that stereotypical image that we have to combat.”

“I think bathrooms can get overblown by the media. They’re flashy and they’re great to cover, but I really don’t think it’s been much of an issue.” — Adelynn Campbell

Adelynn Campbell, a 23-year-old Republican activist and transgender woman from New York City who took part in the demonstration, says she was heartened by the overwhelmingly positive response she received from conference attendees.

“Many people would just say, ‘Glad you’re here.’ A lot of people expressed appreciation that we’re using our right to free speech, which is a very strong, conservative principle,” says Campbell. “We even had some veterans come and thank us. There were a few people who put their thumbs down or said something [negative], but I appreciate them having their opinions, too.”

Campbell hasn’t always been happy with actions taken by the Trump administration, particularly on transgender issues, and feels that discussions of transgender inclusion need to be deeper than arguing over access to restrooms.

“I think bathrooms can get overblown by the media,” she says. “They’re flashy and they’re great to cover, but I really don’t think it’s been much of an issue. Many of us have been using the bathroom that we need to use for a long time.”

Campbell says her disagreements with the president aren’t enough to make her leave the Republican fold. She believes Trump personally supports LGBTQ rights, but is currently listening to advice from people around him who aren’t as supportive.

“You know, politics is all about building coalitions and partnerships. Sometimes you’ve got to choose your battles,” she says. “Right now, I’m concerned with taxes and less government, but that doesn’t mean the bathroom issue isn’t important to me. I think Trump was a New York Republican, he was more open-minded. I think he can be convinced, but he has a lot of people talking into his ear.”

Gregory T. Angelo, the president of the national chapter of the Log Cabin Republicans, says the relatively positive reception that both his organization and transgender conservatives have received shouldn’t be shocking, dubbing the inclusion of LGBTQ conservatives a “non-event event.”

The conference, which is run by the American Conservative Union, received negative headlines in 2012 for banning all LGBTQ groups after a public spat and a two-year contentious relationship with the now-defunct GOProud. However, Log Cabin has been able to serve as a bridge between the LGBTQ community and the broader conservative movement ever since the group was invited to speak on a CPAC panel in 2015.

“What broke the logjam was the detente that Log Cabin reached with the ACU at CPAC 2015 that allowed representation of this representation on a panel on Russia featuring Carly Fiorina,” says Angelo. “That was a chance to show skeptics and doubters that we were actually coming to CPAC to show the value that we bring to the greater conservative movement. We weren’t coming here to be troublemakers.

“What’s interesting is that the support [for LGBTQ conservatives] has always been there,” says Angelo, pointing to a steady stream of attendees who were signing up for Log Cabin’s email list and grabbing stickers to wear on their shirts or place on their backpacks. “It’s a constant stream of folks who are engaging with this organization, with messages of support.

“For so long, the challenge for us was conveying, that, if we were given the opportunity to be a formal presence at CPAC, the support would show itself,” adds Angelo. “Now, that is self-evident.”