LaWana Mayfield, an out lesbian, is accused of promoting homophobia and stigma around same-sex relationships 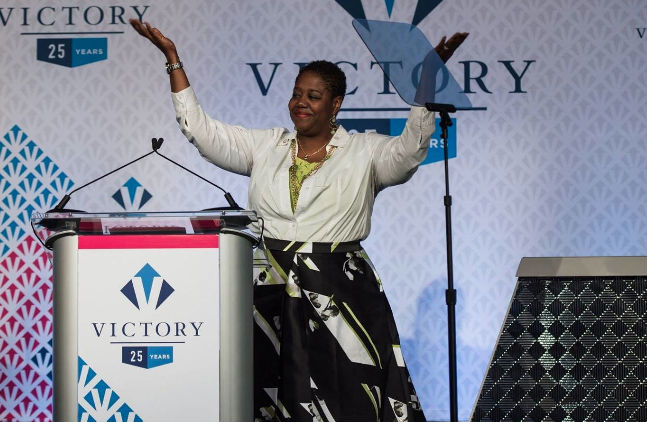 A Charlotte City Council member is receiving blowback from a tweet in which she asked about outing an anti-gay politician if he uses online apps like Grindr to hook up or send explicit photos of himself to other users.

On Sunday, LaWana Mayfield tweeted: “Question for You all. When candidates and those that are extremely judgmental have a @Grindr page with pictures of their private parts should that be fair game? BTW #grindr is a same-sex site #knowwhoyoumaybevoting4.”

Mayfield later told the Charlotte Observer that she wasn’t talking about a specific politician, but was posing a hypothetical situation because she is disturbed when public officials demonstrate hypocrisy by taking one stance on an issue publicly and another in their private lives.

When asked if she knew anyone who has posted pictures of their genitals on Grindr, she said: “Not yet. But if I find out, I will go ahead and expose you. I can’t stand the hypocrisy.”

Mayfield also told the Observer that the question was sparked by the case of former U.S. Rep. Tim Murphy, an ardent pro-life advocate who resigned mid-term after he had an affair and demanded that his mistress have an abortion.

Mayfield added that she also dislikes elected officials who “say it’s morally wrong to be in a same-sex relationship, but then they are caught in a bathroom.”

Mayfield, an out lesbian and Charlotte’s first LGBTQ council member, has served on the council since 2011, often winning the backing or endorsement of pro-LGBTQ groups like Equality NC and MeckPAC, an LGBTQ advocacy group in the Charlotte Metro area.

Matt Comer, the chair of MeckPAC, took to social media to condemn the council member’s comments, accusing her of homophobia. Comer wrote on Facebook that “private and consensual relationships between adults, even if conducted on ‘dating’ or ‘hookup’ apps, is absolutely no one’s business — not voters, not the media, no one.”

He also called out people who would judge users of gay apps like Grindr while “giving a pass to millions of straight people” who use Tindr, OKCupid, eHarmony, or other dating sites. He followed that post up with a second post decrying the “anti-gay shame and stigma regarding gay sex and sexuality” that was generated by Mayfield’s original tweet.

This is a sad, unnecessary, and, at least for the average non-LGBTQ news consumer, confusing story/topic which has already bred more anti-gay shame and stigma regarding gay sex and sexuality.

Comer also took to Twitter, tweeting: “I’m incredibly disappointed that my last 24+ hours has consisted of countering arguments from a leader of my LGBTQ community more suited to an argument with an anti-LGBTQ activist. Homophobia and stigma against LGBTQ love/sexuality is real, even inside our own community, sadly.”

In a conversation with other Twitter users, Comer said it was unfortunate that Mayfield seemed to be “digging in” instead of apologizing for her words and actions.

For her part, Mayfield characterized news media outlets’ coverage of her comments as being “out of context,” tweeting on Tuesday evening: “I Love how the @charlotteobserv takes things out of context but with hundreds of photo’s of me online Y do they only use this one?”

I Love how the @charlotteobserv takes things out of context but with hundreds of photo's of me online Y do they only use this one? Charlotte council member threatens to expose ‘hypocritical’ politicians using gay app https://t.co/hVGrCHWnF0

Two hours after Mayfield’s tweet, Comer retweeted his earlier tweet about spreading stigma and shame, adding: “This feeling [of disappointment in Mayfield] has not changed over the additional last 24 hours.”

This feeling has not changed over the additional last 24 hours. https://t.co/Ks6K2tw1so