By John Riley on March 1, 2018 @JohnAndresRiley 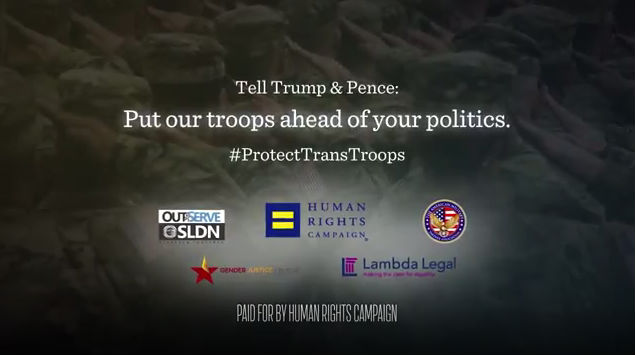 A new television ad is encouraging Americans to voice their opposition to President Trump’s proposed ban on transgender people serving in the U.S. military.

Part of a larger media campaign by the Human Rights Campaign, Lambda Legal, OutServe-SLDN, the American Military Partner Association, and Gender Justice League, the ad seeks to whip up opposition to the ban.

It also complements a full-page print ad that ran earlier this week in USA Today and 32 regional Gannett papers across the nation.

The spot, titled, “Patriots,” features quotes from former Chairman of the Joint Chiefs of Staff Mike Mullen and Sens. Joni Ernst (R-Iowa), Tammy Duckworth (D-Ill.) and John McCain (R-Ariz.) advocating for all qualified transgender individuals to be able to serve.

The coalition hopes to stress the bipartisan nature of support for transgender service in hopes of pressuring the Trump administration to reverse course.

“An impulsive president tweets that transgender Americans won’t be allowed to serve,” a narrator says. “But decorated military leaders say there’s no reason to single out these brave men and women. And lawmakers of both parties say any qualified American should be able to serve, that Trump’s policy is discriminatory and counter-productive to our national security, and trans service members should be treated as the patriots they are. Tell Donald Trump and Mike Pence: Put our troops ahead of your politics.”

Several of the groups behind the ad are involved in lawsuits seeking to halt the Pentagon from implementing any ban that would categorically deny transgender people the opportunity to enlist and serve.

Thus far, six separate judges have issued injunctions to stop military officials from attempting to forcibly discharge transgender individuals until the lawsuits can be fully resolved in court.

“Donald Trump and Mike Pence have pursued this unconscionable, unconstitutional ban despite the opposition of our military leaders, national security officials, bipartisan lawmakers, and the vast majority of Americans who believe that brave, qualified transgender troops should be allowed to serve their country,” Chad Griffin, the president of the Human Rights Campaign, said in a statement. “It’s long past time the White House abandon this reckless, unconstitutional ban and give these brave individuals the dignity, respect and honor they deserve.”

Matt Thorn, the president and CEO of OutServe-SLDN, a pro-LGBTQ military advocacy group, said his organization would continue to challenge the ban in court, calling the ban “out of touch.”

“We urge Americans from every stripe to call and tell the Trump-Pence Administration to stop playing politics with our nation’s Armed Forces,” Thorn said in a statement. “Our trans service members deserve a Commander-in-Chief who values their commitment, their honor, their courage to this country, and their willingness to risk their lives in its defense of its freedoms.”

Danni Askini, the executive director of Gender Justice League, pointed out that all courts that have dealt with the ban have found it is likely to be found unconstitutional.

“We have members [of Gender Justice League] who are hard working service members and veterans who all deserve to be judged on their ability to do their jobs, not on their gender,” Askini said. “We are calling on the Trump Administration to drop this cynical attack and do their job to support Americans willing to serve their country.”

Watch the “Patriots” ad below:

John Riley is the local news reporter for Metro Weekly. He can be reached at jriley@metroweekly.com
← Previous Story First openly transgender recruit has enlisted in the military
Next Story → Trump falsely claims that Pulse shooting was made worse due to lack of guns