Home / News + Politics / Nation / NCLR’s Kate Kendell on retiring: “I have felt privileged every day to do this work”

NCLR’s Kate Kendell on retiring: “I have felt privileged every day to do this work” 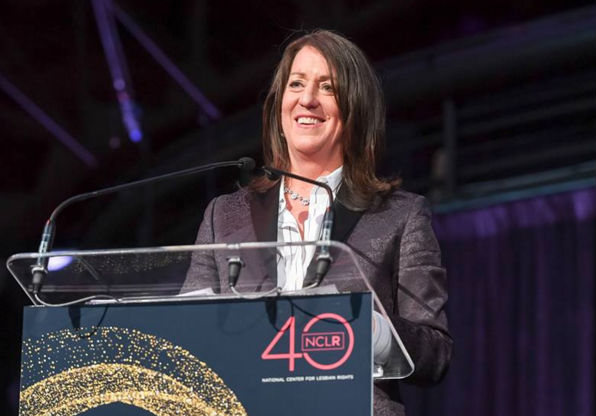 On Thursday, Kate Kendell, the executive director of the National Center for Lesbian Rights, announced she would be stepping down after 22 years with the organization, which has been behind some of the LGBTQ community’s most important legal victories over the past few years.

Under Kendell’s leadership, NCLR’s budget has increased tenfold, growing to more than $5 million, and its staff has increased fivefold, with offices in both San Francisco and Washington, D.C.

Some of the organization’s top accomplishments have including fighting to legalize marriage equality, first in California, and eventually, on a national scale. The organization also successfully challenged an Arkansas state policy refusing to list same-sex couples on their children’s birth certificates in the Supreme Court — obtaining a ruling that is helping to quash attempts by individual states to deny recognition of same-sex couples or non-biological parents in same-sex relationships.

The organization has also been involved in recent efforts aimed at blocking President Trump and the Pentagon from barring transgender individuals from serving in the U.S. military.

“Every time we broke new ground, and won something that was unprecedented, it really felt like we moved the needle,” Kendell tells Metro Weekly. “For example, our representation of Sharon Smith, in San Francisco, whose partner [Diane Whipple] was killed in that terrible dog mauling, where these two huge dogs were running lose in their building and killed her.

“We represented Sharon in her civil suit for wrongful death, and it marked the first time that a lesbian surviving partner had earned the right to stand as a partner, as a close family member, and be recognized legally as having the right to make a wrongful death claim. The horror of that episode remains unchanged, but the fact that we changed the law so that surviving partners would be recognized legally was huge.”

Kendell is also proud of her organization’s role in helping establish the right of same-sex couples to marry in California, and eventually nationwide, following the Supreme Court’s decision in Obergefell v. Hodges in 2015.

“For me, there was an understanding that this was beyond just allowing couples to marry, but about cementing a recognition that our relationships were fully worthy of respect in our culture,” she says. “And that changes everything, in terms of how LGBTQ people are regarded by society, and treated by their government.

“The final batch of cases that stands out to me was the number of times we’ve won asylum claims for individuals coming to this country after suffering terrorizing persecution in their home countries, and winning for them a new life, free from fear that they will be murdered for who they are or who they love.”

Kendell says NCLR has always viewed taking an intersectional approach to LGBTQ rights as crucial to the organization’s success and its ability to gain allies from other movements.

“The thing I’m most proud of, in terms of the culture and who we are as an organization, is that we approach our work with this deep understanding that LGBTQ people are everywhere, represented in every demographic, and so it requires, in order for us to do our best advocacy, that we do our work in an intersectional way,” Kendell says. “We understand that we’re not just single-issue people, and we’re not single-identity people.

“That is deeply ingrained in the DNA of NCLR. I feel like I inherited that legacy, and I feel that that approach is what is going to be even more important for the organization in this next chapter,” she adds.

Kendell has received praise from several of her co-workers, as well as from others in the LGBTQ rights movement.

“Working with a leader of such fierce intellect and unfailing compassion has been the greatest privilege of my professional life,” NCLR Legal Director Shannon Minter said in a statement. “I speak for all NCLR’s staff in saying that we are more dedicated than ever to fulfilling Kate’s vision of a world in which no one is left behind.”

“I fell in love with NCLR nearly 12 years ago,” Lisa Ciseneros, the co-chair organization’s board, said in a statement. “I was an intern, covering the Help Desk as attorneys drove an incredible docket of cases that ranged from marriage equality to asylum cases.

“Kate’s passion and energy made her a formidable force for change in and outside of the LGBTQ movement, and we are all better off for it. I am honored to call her a mentor and a friend. As leader of NCLR, she inspires her team to reach new heights and has helped push the movement for LGBTQ equality further than many believed possible.”

Chad Griffin, the president of the Human Rights Campaign, praised Kendell as “one of the most fearless and tireless advocates the LGBTQ equality movement has ever known.”

“Under Kate’s leadership, the National Center for Lesbian Rights has reached new heights, working to secure national marriage equality and defend the rights of LGBTQ people before the U.S. Supreme Court,” Griffin said. “Kate’s profound work is woven into the fabric of our movement and millions of Americans have felt the impact of her unwavering leadership. I am proud to call Kate a friend, colleague, and a true champion for equality.”

Kendell says NCLR will begin looking for her successor by launching a nationwide search on April 1.

“I am confident that our search will reveal our next fierce and perfect executive director,” she says.

“If I could only give one piece of advice to my successor, it would be to live in gratitude and humility,” she says. “These jobs are such a gift. I have felt privileged every day to do this work, and humbled that I have had the chance and the opportunity to be in this role for 22 years.

“Living in that place of gratitude and humility has helped me get through the hard days,” Kendell adds. “Because there are a lot of hard days — when you lose a case, when someone you’ve represented dies unexpectedly, when you hear horror stories about the treatment of queer people. But even on those days, I’ve felt tremendous gratitude that I got to be involved in trying to push for a day when those types of stories would no longer be happening.”