Advocates for LGBTQ, civil, and reproductive rights blast nominations of Kyle Duncan and Thomas Farr to the federal bench

By John Riley on March 6, 2018 @JohnAndresRiley 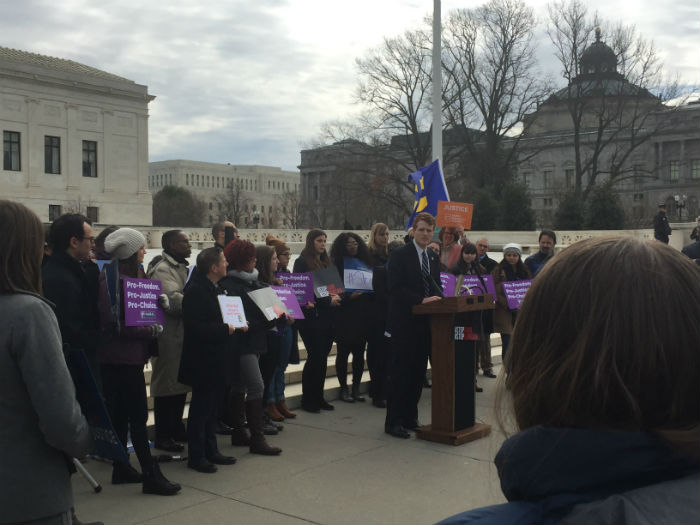 On Tuesday, a coalition of progressive groups held a rally on the steps of the Supreme Court calling on U.S. senators to oppose the nominations of two of Trump’s judicial nominees, Kyle Duncan and Thomas Farr. Both men have a history of opposing LGBTQ and reproductive rights that critics believe hampers their ability to be impartial when hearing cases about those issues.

Duncan, who was nominated for a seat on the already conservative 5th U.S. Circuit Court of Appeals, has been flagged by civil rights advocates for defending state bans on same-sex marriage, defending the Gloucester County School Board when it was sued for discriminating against transgender student Gavin Grimm by barring him from using the boys’ restroom, and arguing that same-sex married couples did not have the right to be listed as parents on their adopted child’s birth certificate.

Duncan also defended the state of North Carolina against a lawsuit challenging its controversial HB 2 law, which restricted LGBTQ rights, specifically barring transgender people from facilities that match their gender identity. In defending the law, he introduced junk science from so-called “experts” who argued that being transgender is a “delusion” that should be discouraged by parents.

Farr, nominated for the U.S. District Court for the Eastern District of North Carolina, has come under fire for his views on civil rights, including his alleged involvement in a 1990 postcard campaign for which North Carolina Republicans were accused of trying to intimidate black voters in the hope of discouraging them from voting. Farr also defended North Carolina’s Republican legislators in court after people challenged the constitutionality of legislatively-approved congressional map and the state’s law requiring voters to show a very specific form of identification in order to vote. 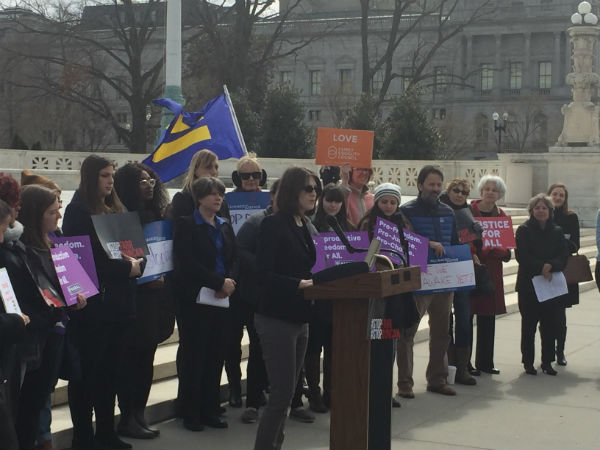 Harper-Jean Tobin, of the National Center for Transgender Equality, addresses the crowd. – Photo by John Riley

“A couple of years ago, I walked into the building behind me to hear oral arguments about whether our country would recognize the legal right of people to marry the person they love. On our way out the door, I looked behind me at the four words etched in stone above the entrance to our Supreme Court: ‘Equal Justice Under Law,'” Kennedy said, invoking the errors of past American generations, including the Three-Fifths Compromise, the denial of women’s right to vote, and the Plessy v. Ferguson ruling upholding state-sponsored segregation as “separate but legal.”

“Our history is a constant and consistent rejection of those ideas, in an effort to make good on those words behind me,” Kennedy said. “…[W]e will not allow the bigoted beliefs of two men to unwind the progress that has been demanded by millions who came before them, and the millions that will come after them. We will not stand silent as Kyle Duncan derides our transgender neighbors, friends, and loved ones as ‘delusional,’ and questions the constitutionality of their guaranteed rights. We will not allow Thomas Farr’s ‘surgically precise’ attacks on the right to vote.”

Todd Cox, the director of policy at the NAACP Legal Defense and Educational Fund, highlighted the importance of the courts, historically, in ensuring civil rights (often in the face of inaction by state or federal lawmakers reticent to oppose segregation or state-sponsored discrimination) and currently, in pushing back against some of the Trump administration’s excesses. Noting that federal judges have lifetime appointments, Cox said that any judicial nominees should have “unimpeachable” qualifications and have demonstrated a commitment to defending Americans’ civil liberties.

“President Trump’s nominees do not fit this bill at all,” Cox said. “The demonstrate an aggressive hostility towards civil rights and equal justice, and their records are rife with animus towards minority communities who depend most on the courts to vindicate and protect their rights.”

Sarah Warbelow, the legal director of the Human Rights Campaign, was one of several speakers who specifically went after Duncan for his explicitly anti-LGBTQ actions and past statements.

“[Kyle Duncan] is not a man who was an average civil servant during his time in government,” Warbelow said, referring to Duncan’s work for the Louisiana Attorney General’s office, prior to serving as general counsel for the Becket Fund, a right-wing organization dedicated to advancing an overly robust interpretation of “religious liberty.”

“This is not someone who maybe had some qualms about the role he played. This is not a man who is an average firm attorney, who occasionally has a client whom he disagrees with,” Warbelow continued. “Instead, Kyle Duncan is a gun for hire who has made his career about targeting LGBTQ people in every aspect of their lives.” 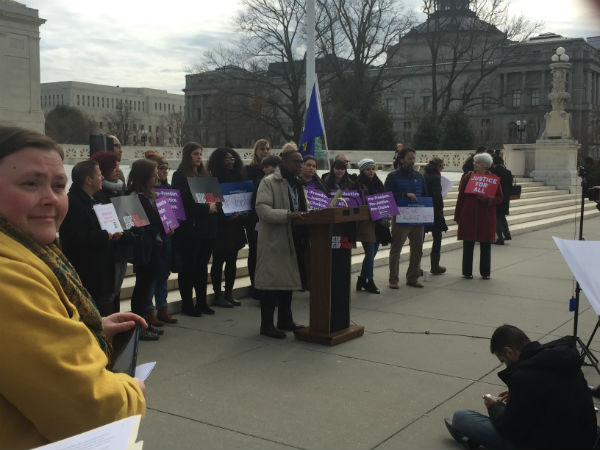 Nicole van Kuilenburg (left), glances around as Todd Cox of the NAACP Legal Defense and Educational Fund speaks in opposition to the nominations of Thomas Farr and Kyle Duncan to the federal bench. – Photo by John Riley

Nicole van Kuilenburg, the mother of a transgender son, James, from Frederick, Md., said she believes Duncan is incapable of being impartial should a case involving transgender rights come before him if he is confirmed.

van Kuilenburg  recounted to the crowd at the rally how her son had been discriminated against when he attended middle school in West Virginia, and later, while attending high school in Frederick, was instrumental in pushing for the school board to adopt a transgender-inclusive policy that treated transgender children according to their gender identity. That policy was later challenged by the anti-LGBTQ legal group Alliance Defending Freedom.

“It’s unbelievable to me that someone like Kyle Duncan is even being considered for a judicial appointment,” van Kuilenburg said. “As one of the nation’s leading lawyers in an effort to deny rights to transgender students, his actions have done so much harm to children like James. … I know from firsthand experience about the consequences of denying a [trans] child’s existence, and it’s unthinkable that anyone with those dangerous beliefs could be seated on the federal bench, let alone for a lifetime position.” 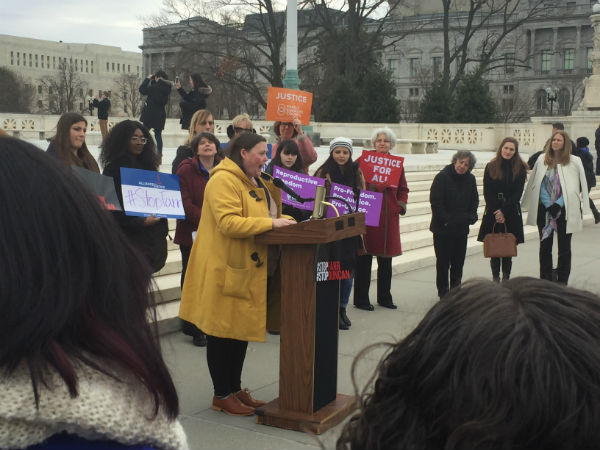 Following the rally, Sharon McGowan, the director of strategy at Lambda Legal, summed up the coalition’s opposition to the nominations of Duncan and Farr, echoing complaints previously voiced by other civil rights advocates about the Trump administration’s efforts to pack the courts with conservative ideologues. Lambda Legal has previously offered an in-depth analysis of Trump’s judicial nominees, showing that 1 in every 3 of them boasts a record that demonstrates explicit anti-LGBTQ animus.

“For the last decade, Mr. Duncan and Mr. Farr have been the attorneys-of-choice to lead crusades that target the rights of transgender children, black voters, women, and others,”  McGowan said in a statement. “The courts play an essential role in protecting those most vulnerable in this country and we cannot allow Mr. Duncan and Mr. Farr to continue to inflict harm on these vulnerable communities for generations to come.

“The public is fed up with the White House’s unending flood of judicial nominees whose records reflect disrespect and disdain for LGBT people, women, and racial minorities,” McGowan added. “Senators who simply roll over and allow Donald Trump to pack the courts with lifetime appointees who oppose civil rights and who have often spent their careers seeking to undermine LGBT rights, are ignoring their constitutional duty to protect the integrity of our courts, and ensure that they are a place where all people can access equal justice under the law.”