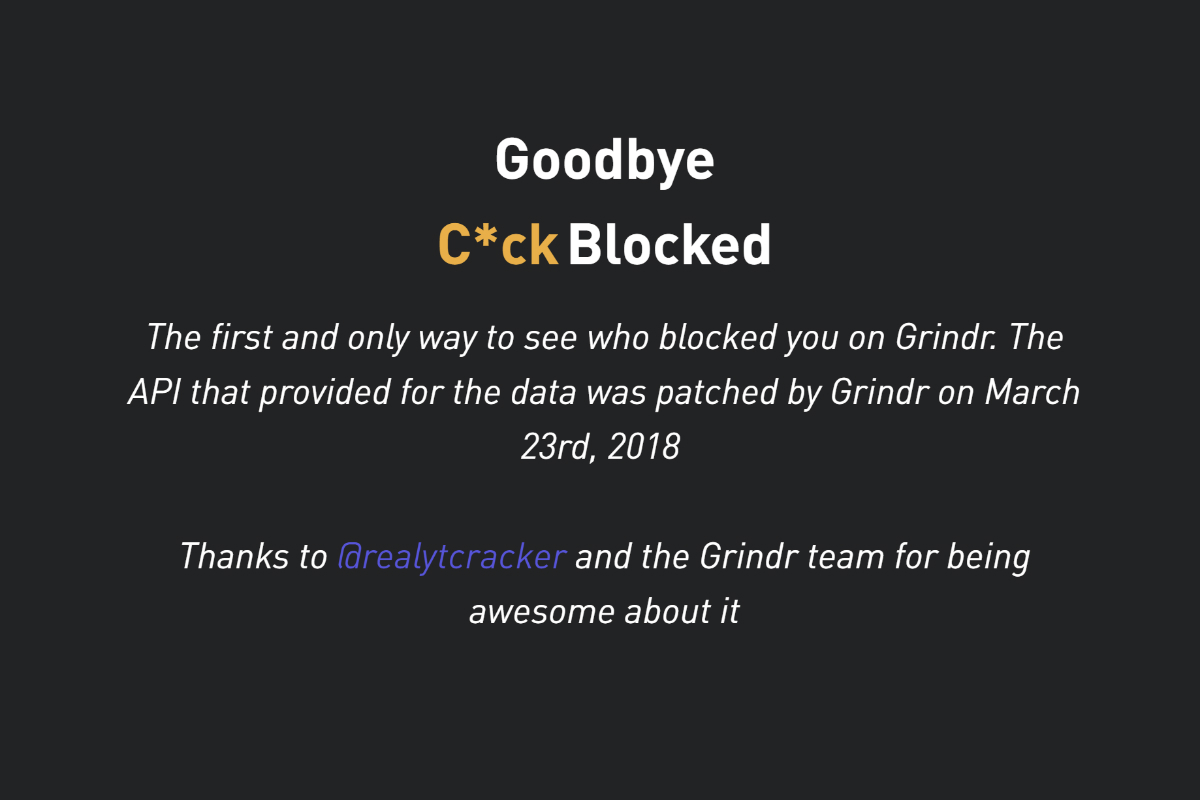 Earlier this month, D.C. developer Trever Faden created a website that allowed people to see who had blocked them on Grindr.

But C*ckBlocked, as the website was known, came with a warning from Faden: check soon, because Grindr would likely “shut [him] down very quickly.”

That day has now arrived. According to Faden, Grindr patched the API that was providing the data for C*ckBlocked, rendering the site useless.

Faden, who runs a real estate tech company in the D.C. area, built C*ckBlocked both as a way to show users who had blocked them, as well as to show how that data was being stored.

Faden says he spoke to Grindr’s data security team throughout C*ckBlocked’s brief existence, and while Grindr knew he was only collecting information to provide data on blocking, they could not allow users to keep putting their personal account information into a non-affiliated site.

“They don’t want people putting in their username and password into any third party site, because there are lots of folks who could do that that do have malicious intent,” Faden says, adding, “It could set a precedent for other phishing scams … [they] could collect those usernames and passwords and do something malicious with them.”

Faden says that Grindr patched the API due to security concerns, not because he was letting people see who had blocked them.

“They actually asked me if I wanted a job, so it was kind of the opposite,” he says, “They were definitely not angry at all.”

As for C*ckBlocked, Faden says those who accessed the site had told him it was “fascinating,” because it allowed users to visualize their own data.

“I think that’s just again something that really taps on into what’s going on with Facebook now and all these security concerns,” he says. “You start to notice how much data some of these companies do have on you and what you unknowingly are providing them.”

Faden says he is not finished with Grindr, and is currently working on his next project — a heat map that shows data from registered profiles by individual neighborhoods.

“Maybe there’s an older crowd that lives in a certain part of the neighborhood, a younger crowd, maybe you see that people navigate at certain areas at certain times and then the average age, the percentage of tops, bottoms, etc,” he says. “[Faden’s new project] will take and synthesize all that data and it will display to you what your neighborhood looks like in terms of self-reported gay male data.”

When challenged on whether a map showing the location of gay people in a specific area could be dangerous, Faden says the heat map will not be specific enough to pinpoint individual groups.

“Anywhere people have their distance enabled we can get their proximity. I will just…display that data, but it is not tight triangles or specific points,” he says, adding, “It would be nearly impossible to pull any one individual out.”

Faden says his goals is “to not make the insights anything particular like ‘oh people there are 300 people in this one place in this particular time.'” Rather, it would be a five-by-five block area showing a concentration of gay men.

“If you wanted to target a minority and harm them in some way, there are far more easier mechanisms than getting broad analysis of where you know a population kind of lives in a dense geographic region like DC,” Faden says.

In terms of whether or not Grindr — which did not return a request for comment — will support his new project, Faden is not sure, but believes it will not pose a security risk like C*ckBlocked.

“The way I’m setting this one up is it’s not you’re not going to have to put in your username and password,” he says. “It’s just generic data. It’s not specific to you in terms of your blocks and your favorites or whatever. You won’t have to put in any sort of identifying information to be able to use it.”

When asked about what he’s learned from C*ckBlocked, Faden says he was happy that he created something that could start discussions about taboo topics, and says that is the whole point of his side projects.

“If I’m going to spend my time building things that I find fun, I want to build things that that can start conversations,” he says. “I generally find that giving people access to data to view, to understand, to interpret with their own context, just yields interesting and unexpected outcomes.”

Also Read: Grindr will now remind users to get tested for HIV