By John Riley on April 3, 2018 @JohnAndresRiley 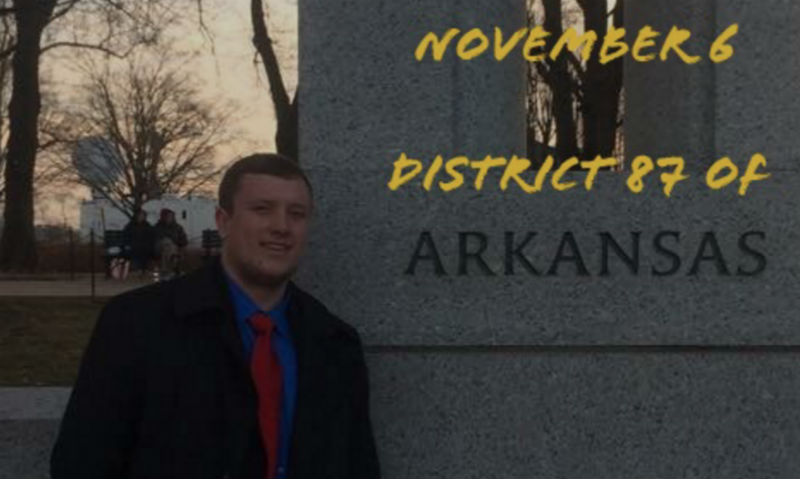 A Libertarian Party candidate for Arkansas state representative is being asked to “immediately abandon” his campaign after he said “fags are disgusting” and linked homosexuality to HIV.

Justin Jones, running for District 87 in northwest Arkansas, made the comments using his personal Facebook account in response to a Hawaii woman’s post about her gay friend being unable to donate blood.

Myah Baeza, whose personal political beliefs range from Republican to Libertarian, wrote: “This is such an antiquated rule and it disgusts me. Women can have AIDS, too, and they search for it anyways?”

“Knowing that my gay friends can’t give blood, that has always not sat well with me,” Baeza told NBC affiliate KARK in an interview on Monday.

But Jones responded to her post, writing: “The likelihood of a fag catching HIV is 1000% more likely than any straight person.”

“Why in God’s name would you say that?” Baeza wrote back.

“If you don’t think HIV is created by homosexuality then you need education,” he added. “That’s the entirety of my post, for someone who wants free speech, you don’t act like it. I shouldn’t have said ‘fags’ should have said homosexuals. But I won’t apologize of the moral of my comment, homosexuality is wrong, and shouldn’t be publicly endorsed.”

Baeza told KARK that she brought Jones’ comments to light because she wanted his constituents to be aware of his beliefs should he be elected. Jones is currently running against incumbent Republican State Rep. Robin Lundstrum and Democrat Kelly Scott Unger.

“When you’re running for public office, no matter if you disagree with your constituents, you’re still supposed to be representing them,” Baeza said. “And how are you going to represent someone who you think is ‘disgusting?’

“It just really upset me that there’s still people out there who feel like they can publicly say these kinds of things without ridicule,” she added.

When the comments first gained media attention, Jones attempted to say that his comment was meant to be satirical, even though it was based on the fact that LGBTQ people are more likely to have HIV.

“In the new day of Social Media, we face backlash for every comment we make, which is putting ‘Free Speech’ at a price,” Jones wrote in a statement posted to his website. “The AIDS Epidemic is a VERY big part of the LGBTQ Community. To not recognize that would be a ‘Lie’ to yourself and the LGBTQ Community. In this New Day of politics, we are recognizing the benefits of throwing away the old establishment, and how that didn’t work. Today, we are bringing back ‘FREEDOM OF SPEECH,’ and protecting our 2nd amendment rights. That might be too much for some people, but that’s why we’re getting them out of Public Office. Let’s get back to ‘Making Arkansas Great Again.’ Vote Justin Jones for State Representative, District 87.”

The Libertarian Party of Arkansas responded by calling Jones’ comments “antithetical” to the party’s position on LGBTQ rights — namely, that the government should not interfere in private relationships — and noted that the party has supported marriage equality since its founding in 1971.

“We believe that the rights of the individual are paramount — that each person has the right to make decisions for themselves about what activities to pursue, what foods to eat, what beverages to drink, and who to love,” Dr. Michael Pakko, the party chairman, said in a statement. “Mr. Jones is within his rights to associate with gay individuals or not, and to have opinions of his own about morality, but the denigrating, insulting comments that have been attributed to him have no place in the political messaging of the Libertarian Party, and we disassociate ourselves from such offensive remarks.”

The Benton County Libertarian Party followed in similar fashion, also disavowing Jones’ remarks and calling on him to drop out of the race.

“The Benton County Libertarian Party urges Mr. Jones to immediately abandon his campaign for office, and to refrain from returning to the political arena until such time as he has gained enough knowledge, wisdom, and maturity to do so responsibly.”

But Jones says he’s not stepping down anytime soon.

“In response to the backlash caused by the media, it has been brought to my attention that I should suspend my campaign,” Jones wrote in a statement posted to his website. “After a phone call with the Chair of the Benton County Libertarian Party, Michael J. Kalagias, I informed him, that I will continue my candidacy for State Representative. My candidacy is about the people of Elm Springs, Siloam Springs, Springdale, and Tontitown. My campaign will continue to fight on the behalf of District 87. I would like to thank everyone for their support in my growing campaign.”

As for Baeza, she’s since blocked Jones on Facebook, meaning she no longer has to associate with him. But that said, she still feels his comments were inappropriate.

“If you have any contempt or hatred in your heart for the people who you might be representing then you probably shouldn’t run for public office,” she said.