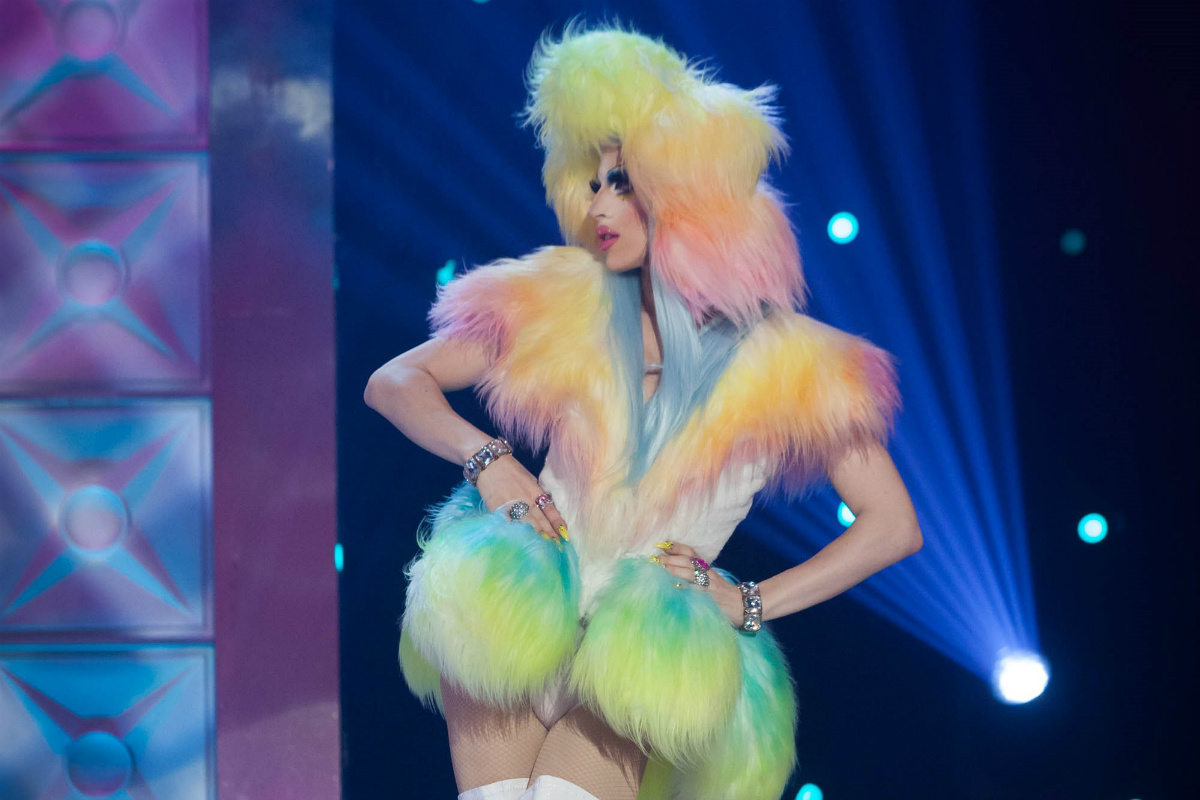 Okay, it’s time to sound the alarm: something just isn’t right over at RuPaul’s Drag Race. (And no, we’re not talking about the fact that Aquaria was actually good in this episode.) We’re four episodes into the tenth season of drag’s flagship event, and as the hours go by we can’t shake the feeling that the production team is simply running out of ideas.

This is arguably one of the fiercest groups of queens in Drag Race history — out of fourteen girls we haven’t actually had a “bad” competitor, unlike seasons past. And yet, while we have both queens and challenges that reference the future of drag, everything here feels like road we’ve traveled before.

The maxi-challenge this week was an end of the world ball, one where climate change has wreaked havoc, ultimately forcing humanity off planet. It required three distinct outfits, but the chosen themes resulted in a pastiche of previous runway ideas: Alaskan Winter Realness required beachwear, something we’ve seen countless times; Miami Summer Realness forced the queens to go for heavy coats, ice queen costumes, and other winter-inspired looks we’ve had on the runway in previous seasons; and Martian Eleganza Extravaganza necessitated future-forward, alien-inspired drag — if you’ve watched season three’s “Queens in Space,” you knew what to expect.

That’s not to say that this was a bad episode, but there’s a sameness to these proceedings that’s threatening to overshadow a cast of excellent queens. And that’s a shame, because episode four put aside the manufactured Drama™ — ignoring some post-elimination tension between Mayhem Miller and Monique Heart — and let the workroom realness shine through.

It started with a mini-challenge that yet again called for quick drag, but produced some laugh-out-loud moments as the queens were asked to photobomb famous celebrity photos. Highlights included Miz Cracker throwing up her wig to mimic Venus Williams thrusting a Wimbledon trophy in the air, and Monique Heart grabbing Nick Jonas’ crotch. Aquaria — whose quick drag was, somewhat ironically, one of her best looks thus far — won this challenge with a photo of her picking up dog poo behind Kim and Kanye on the runway.

Things only got better once we moved to the workroom. Drag Race has often felt its most real when the girls are working against the clock to throw runway looks together. Facades drop, fabric flies, and the editing teases who might ultimately fall flat on their faces.

Even RuPaul stopped by to talk with the queens — spending more time in the workroom this episode than he did in all of All Stars 3. Indeed, everything about episode four felt more relaxed, more comfortable, less rushed. This was classic, design-led Drag Race. Oh, and there was reading galore.

We also had yet another emotional workroom moment. Asia O’Hara spent most of the episode helping the other girls with their looks, whether giving advice or assisting with sewing machines, and Blair told her that she saw her as a mother figure. Asia then revealed that her parents died when she was 27, but drag saved her, noting, “Doing drag gave me those family connections [back].” It was a touching moment — we’re often told that drag queens view one another as family, but for Asia it’s literal.

We can only presume that the producers feared the episode lacked the requisite quotient of Drama™, because out of nowhere Miz Cracker asked Aquaria if she had sugar daddies in New York who helped fund her drag, a rumor apparently doing the rounds in the Empire State. Props to Aquaria, because her response was great: “If you look like a million bucks, people might assume that you come from a million bucks.” She then shut the rumor down, saying she worked for everything she had.

Miz Cracker? She dryly called out —  direct to camera — for a sugar daddy. Referencing the rumors that she’d borrowed from Aquaria’s looks in the past, she commented on Aquaria going it alone by saying, “I admire Aquaria, but that is not a look I’m trying to steal.” It was an amusing ending to a completely random exchange.

We then moved into arguably the highlight of episode four. After the girls commented on Eureka’s accent, Monét X Change gave the girls a history lesson: people in England originally had American accents, but later developed the English accent. Wait, what?

It was a screamworthy moment as Monique and Asia stopped proceedings to simultaneously gag, collect their dropped jaws, and try to teach Monét that the American accent developed from the English accent and others. Monét, however, was not for turning. Reading really is fundamental, people.

Finally, it was on to the main runway, and it was… fine? Really, this is when we get back to the problem of originality — try as they might, all of the queens were working within the confines of categories that we’ve seen to some degree in previous seasons. That said, there were still several highlights.

Aquaria was crowned the winner of this challenge — and despite the countless snarky things we’ve written about her over the past few weeks, she truly earned it. Miz Cracker was a close second (and we’re still #TeamCracker for the moment), while Kameron Michaels rounded out the top three for serving three genuinely different looks and characters.

Asia, who won last week, scraped through by a hair, after admitting that she spent most of her time in the workroom helping the other girls rather than working on her own lackluster outfits. Less lucky were Monét and Dusty, who wound up lipsyncing for their lives to Nicki Minaj’s “Pound the Alarm.” 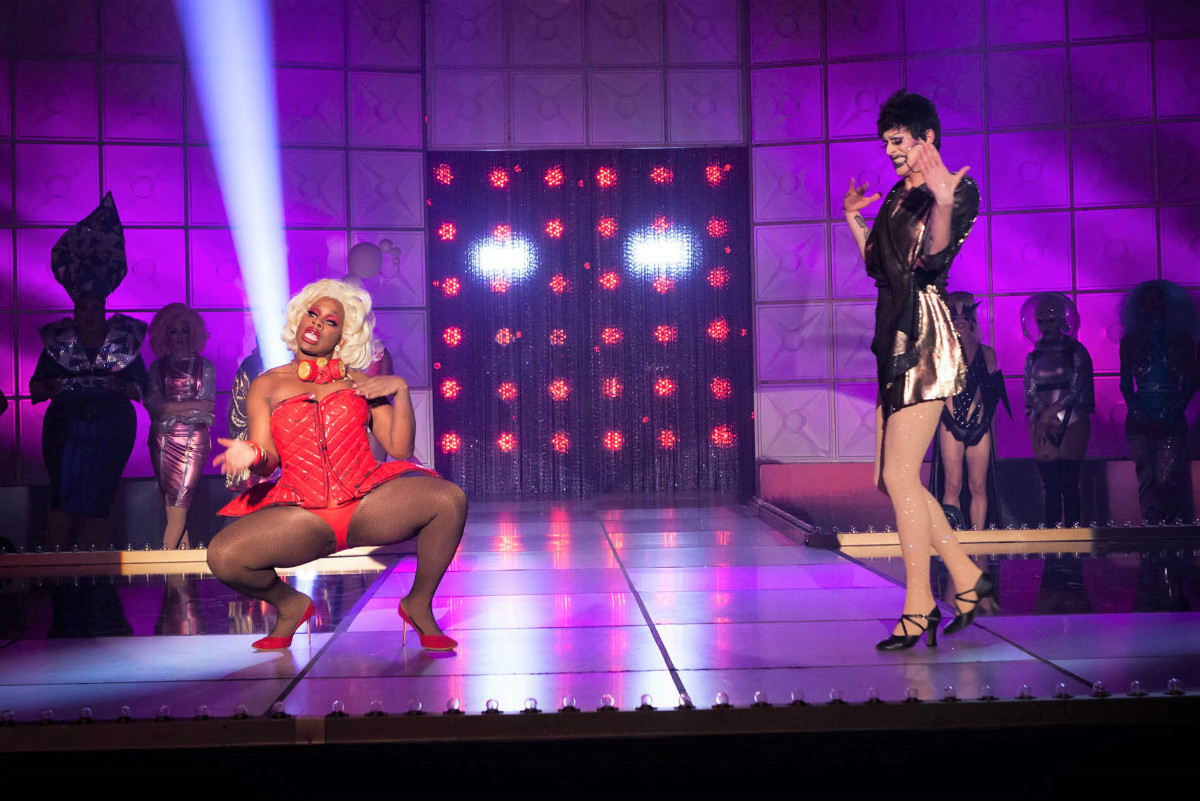 And goddamn did Monét pound the shit out of this lipsync. Dusty was good, offering her own brand of weirdness as she jerked and danced across the runway — though she flubbed some of Nicki’s lines. But Monét slaaaaaaaaaaaayed, dancing out the song, gesturing through the lyrics, even daring to tease the judges with a drop into the splits before shaking her hands and saving it for later.

The outrageous comedy, the tightness of Monét’s lipsync, the sheer audacity to bait the judges with her own performance while another queen was working the stage — it was masterful. Even Ru was impressed, telling the other queens, “That is what we call a lipsync for your life.”

Monét deservedly won, and remains for another week. Sadly, we have to say goodbye to Dusty — while her runway was wildly inconsistent — sometimes great, sometimes poor — her personality will be missed.

And that was episode four. What did you think? Did you gag over any moments we missed? Will Aquaria continue her upwards trajectory? Let us know in the comments!

Rhuaridh Marr is Metro Weekly's managing editor. He can be reached at rmarr@metroweekly.com.
← Previous Story Jimmy Kimmel apologizes for gay joke directed at Sean Hannity
Next Story → Dusty Ray Bottoms: “I hope that I was able to change some lives”