Syracuse fraternity suspended after video of bigoted behavior is released

A Syracuse University fraternity was suspended on Wednesday after a video surfaced showing members participating in racist, homophobic and sexist behavior.

Syracuse’s independent student newspaper, The Daily Orange, acquired videos filmed in the Theta Tau house that show a man forcing another man to his knees and making him repeat an oath while holding a can as if it were his member.

“I solemnly swear to always have hatred in my heart for n***ers, sp*cs and most importantly the fuckin’ k*kes,” the person on his knees repeats, then pretends to perform sexual favors on the can.

In another video, a person instructs a group to “get together and [talk] about their significant others while drinking different wines and talking in gay girly accents.”

The recording shows the videos were posted on a secret Facebook group called “Tau of Theta Tau.” It was reported that other videos in the same group used anti-Semitic language and insulted people with disabilities.

“I am appalled and shaken by this and deeply concerned for all members of our community,” Syverud said. “There is absolutely no place at Syracuse University for behavior or language that degrades any individual or group’s race, ethnicity, sexuality, gender identity, disability or religious beliefs.”

Syverud also said that after confirming Theta Tau was involved, they suspended the fraternity immediately.

The Department of Public Safety will begin a formal investigation to “identify individuals involved and to take additional legal and disciplinary action.”

LGBTQ advocates condemn shirts reading: "In Wyoming, we have a cure for AIDS. We shoot f----n' f----ts." 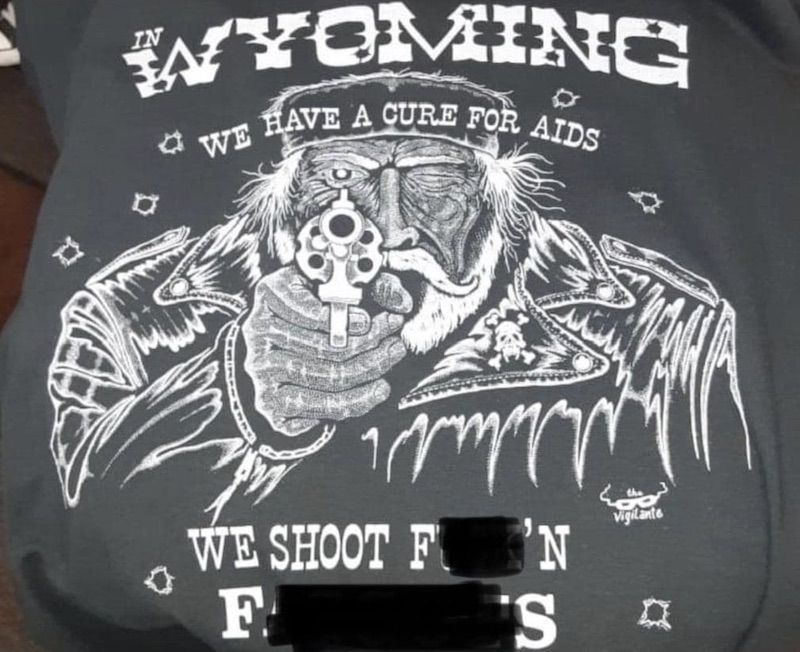 A biker bar in Wyoming has been condemned for selling t-shirts suggesting that the "cure for AIDS" was to shoot gay people.

The Eagle's Nest, in Cheyenne, Wyoming, was criticized after a photo of the shirt began circulating on social media.

The shirt features a man pointing a pistol and reads: "In Wyoming, we have a cure for AIDS. We shoot fuck'n faggots."

Images of the shirt were first circulated by Wyoming Equality, the state's largest LGBTQ organization, which declined to name the bar out of fear that the bar would gain notoriety among anti-LGBTQ groups or receive more orders requesting shirts.