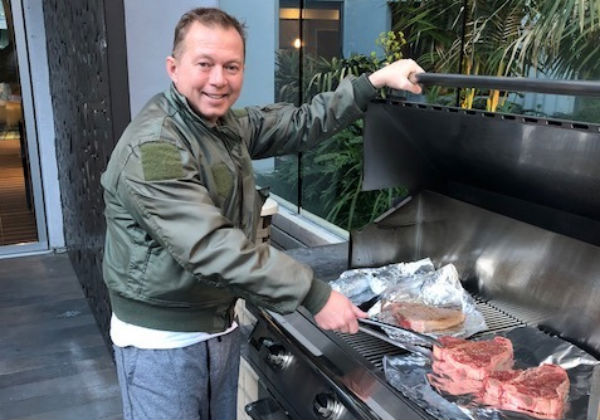 A gay candidate for West Hollywood City Council has shared photos and videos of himself naked and having sex, all in the name of transparency.

Eric Jon Schmidt, one of four newcomers vying for a seat on the the Council in next year’s election, provided the online news website WEHOville with a link to his DudesNude account, writing: “I am 100% transparent. I have nothing but good intentions and I am not running against anyone, just their seats. I have nothing negative to say about the others and never will.”

Schmidt’s profile name on DudesNude (very NSFW) is Need2BNude and contains 23 photographs of him naked or having sex, as well as six videos of him having sex or engaging in the practice of “sounding.” The profile also includes a 2,729-word profile describing his sexual proclivities.

“I think the Human Body is a Beautiful work of Art and I have no ‘hang-ups’ about showing mine even though it is average,” Schmidt’s profile reads. “PrEP works, but always use condoms. I am a sexhibitionist. I am very clean and clean cut.

“I’m an exhibitionist, not a nudist. I don’t do anything in public, only here on Dudesnude…. I like to make amateur sex vids. I like some kink, cbt, spanking, but no scat, blood or bruises. I am not a hustler or hooker, I just like to be an exhibitionist on Dudesnude. I don’t get paid for anything I do nude.”

In a biography provided to WEHOville, Schmidt describes himself as a volunteer with organizations like Heal the Bay and Project Angel Food, as well as an advocate for the disabled. He says he’s served in the U.S. Army and as a fitness trainer to celebrities and “showboys and showgirls” in Los Angeles and Las Vegas.

Schmidt will likely face off against incumbent council members John D’Amico and Lauren Meister, as well as Duke Mason, a member of the city’s Lesbian and Gay Advisory Board, Timothy Williams, the head of a production company, and local artist Tom deMille, who previously ran for Council in 2013.

Whether or not Schmidt’s willingness to share intimate details about his sex life will hurt him remains to be seen, particularly in West Hollywood, where an estimated 40% of residents are LGBTQ-identifying, many of them gay men who may also have profiles on similar websites or dating apps.

Schmidt told WEHOville: “I do not think it will hurt my campaign anymore than it would a candidate’s stamp collecting hobby. My hobbies do not affect any other part of my life. Being a performance exhibitionist is one of my hobbies. I also danced nude in Canada to help pay for college, but I loved it.”

He also claims that, of the 2.7 million viewers of his DudesNude profile, 4,000 are West Hollywood residents who have pledged to vote for him.

“I do think it will help my campaign for people who believe the human body as art. Plus it shows that I believe in transparency and I’m not afraid to express myself.”

See also: Anti-gay Republican quotes after getting caught having sex with a man in his office