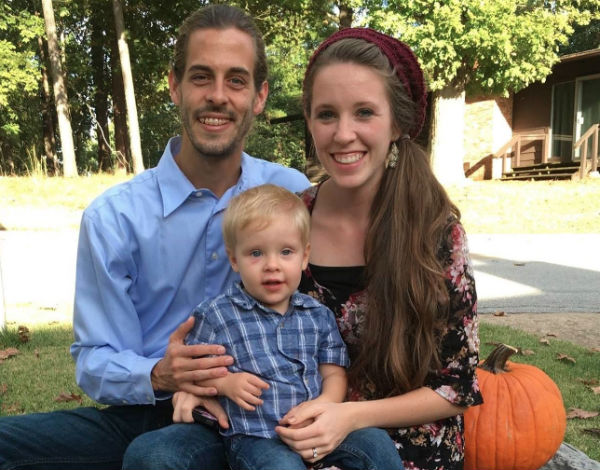 Derick Dillard and Jill Duggar with their son — Photo: Facebook

Derick Dillard, the husband of Counting On and 19 Kids and Counting star Jill Duggar, is engaged in yet another spat over his tweets criticizing homosexuality. This time, it’s the hosts of ABC’s The View.

The View hosts talked about Dillard’s past tweets attacking gay interior designers Nate Berkus and Jeremiah Brent for their TLC show Nate & Jeremiah By Design, which follows the couple’s professional and personal life, including raising their two children.

It’s that latter part — gays raising children — to which Dillard objects, tweeting: “What a travesty of family. It’s sad how blatant the liberal agenda is, such that it both highlights and celebrates a lifestyle so degrading to children on public television as if it should be normal.”

What a travesty of family. It’s sad how blatant the liberal agenda is, such that it both highlights and celebrates a lifestyle so degrading to children on public television as if it should be normal. https://t.co/xicRm1nsW7

The View hosts didn’t take kindly to Dillard’s characterization of same-sex marriage and parenting, with all of them pushing back against his comments. Host Whoopi Goldberg characterized Dillard’s tweet as an attempt to “impose your particular nastiness” on others who don’t believe as he does.

“You should just stop, man. Stop. You don’t have to agree with anybody’s lifestyle. But you don’t live in their house, just like we don’t live in a house of 900 kids, and that’s what you guys are celebrating on your show,” said Goldberg. “So cállate la boca [shut your mouth].”

Sara Haines, who has a gay brother, talked about how families look different and how some of the best parents she’s known have been same-sex couples. Host Sunny Hostin agreed, alleging that comments like those made by Dillard come from people who “lack empathy” and haven’t been exposed to gay couples.

“I think when you hear from people like this, it’s because they haven’t opened up their hearts and their minds and their eyes to experience people who are different from they are.”

Joy Behar took issue with his claim that TLC, which also airs Counting On, is carrying out a “liberal agenda,” noting that he has an equal platform in terms of media attention, but speculating that perhaps Dillard is jealous of the attention currently being lavished on Berkus and Brent.

Conservative panelist Meghan McCain reiterated her support for same-sex marriage, told a story about her mother’s change of heart on same-sex marriage — which was related to the importance of adoption — and pointed to studies showing there’s no significant difference between children raised by same-sex parents than those raised by opposite-sex couples.

“These people really are in the minority, in a lot of different ways,” she said. “So he may have these really abhorrent opinions, as far as I’m concerned, in regards to love and marriage and families, but I think the majority of the American public at this point — and there’s stats to back that up — are [supportive of same-sex marriage].”

But Dillard fired back on Twitter, writing: “Really?! Are my friends on The View really going to be our standard & champion for open-mindedness? Conviction doesn’t equal lack of open mindedness. We need to love all people & promote what’s best for everyone. Most Americans believe this, but are fearful of bullying like this.”

Really?! Are my friends on The View really going to be our standard & champion for open-mindedness? Conviction doesn’t equal lack of open mindedness. We need to love all people & promote what’s best for everyone. Most Americans believe this, but are fearful of bullying like this. https://t.co/BHBVBSsT5k

Dillard was reportedly fired from Counting On for making derogatory comments about transgender teen reality star Jazz Jennings, star of TLC’s I Am Jazz. But he continues to insist that he and Jill left the show of their own accord. In any case, he’s once again thrusting himself in the spotlight with another celebrity feud — which has some media sites speculating that he’s just seeking attention for himself.

See the segment from The View on Dillard’s comments below:

John Riley is the local news reporter for Metro Weekly. He can be reached at jriley@metroweekly.com
← Previous Story WATCH: Adam Rippon slays Dancing with the Stars premiere
Next Story → Caitlyn Jenner: Trump has set transgender community “back 20 years”