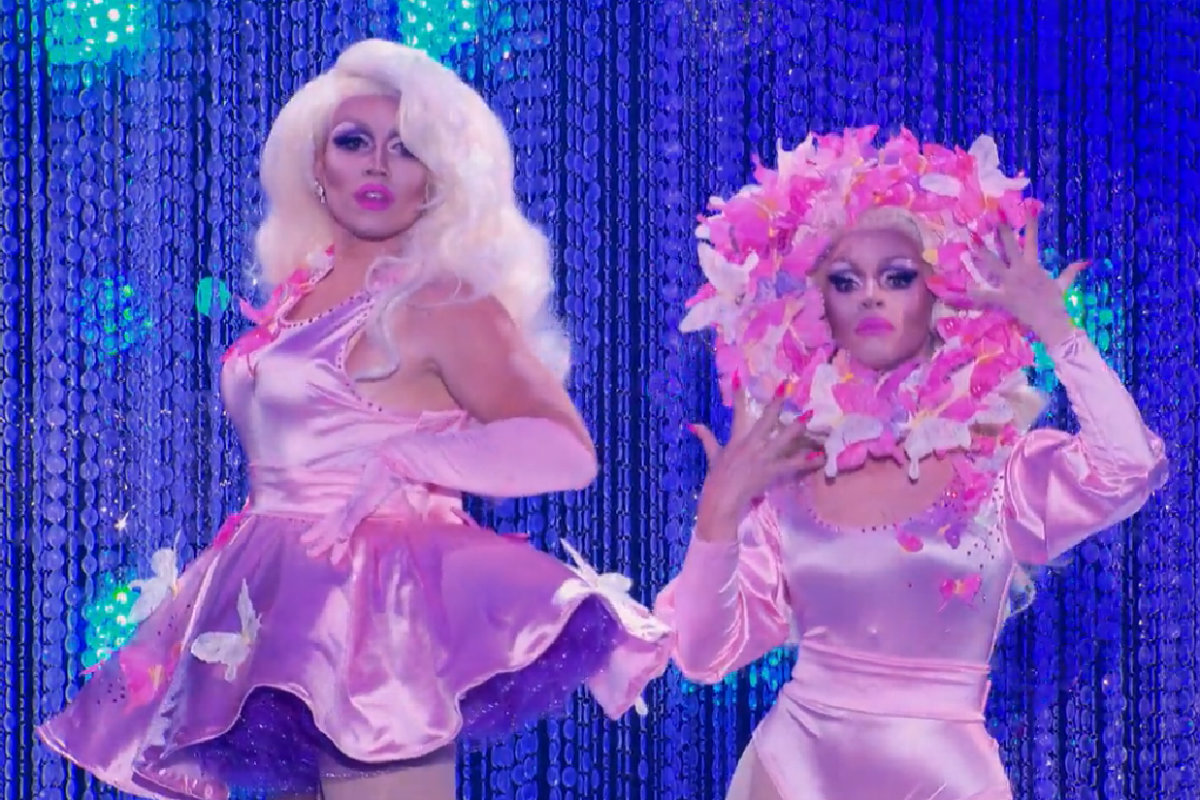 The makeover episode. It’s obvious why this challenge is included every season of Drag Race: It puts the remaining queens through the wringer, as they prove they can turn another person into a runway-ready queen — face, body, hair and all. However, that hasn’t stopped it from producing some of the most bizarre, awkward and boring episodes in the show’s run.

No more, thankfully. Someone in the production team had the brilliant idea of replacing the Average Joes with fame-hungry social media stars, and it was an inspired move — these are people used to performing in front of a camera, eager to please those watching at home. In the race to make them over into a queen with charisma, uniqueness, nerve and talent, having at least some of the parts in place already made for much more spirited viewing.

First, things kicked off with Aquaria slipping back into the arrogant, overconfident routine she favored at the start of the season. Fresh off last week’s non-elimination, which saw both Kameron and Eureka saved, Aquaria immediately started pouting that they remained the top six, not the top five that she had hoped for. It was a bratty moment, even if her frustration was somewhat understandable — what if, she wondered out loud, she landed in the bottom two? The double-save had already been used (and, we would argue, wasted on Eureka).

Cue Asia with a reality check: “That is so narcissistic for you to correlate them two staying with you being further away from the crown. And it’s so irritating for me that you turned it into something about you.” Well, damn.

Anyway, on with this week’s mini-challenge, saw the queens tasked with becoming “super-macho” men, complete with painted on facial hair and stereotypical attire in order to promote RuPaul’s new (and totally fake) perfume Trade. It was fun, as the queens spouted cheesy lines and posed for the camera, though Eureka inexplicably took the prize — we’d argue that Asia was much more deserving. (Not least because she was legitimate trade.)

Time to match up the Kings with our Queens! #DragRace pic.twitter.com/wxslmahIr9

Eureka’s prize, in addition to a gift card, was to pick the teams for this week’s maxi-challenge makeover. Enter the social media stars who would become runway-conquering drag queens: Tyler Oakley, Chester See, Kingsley, Anthony Padilla, Raymond Braun, and Frankie Grande. (Seriously, the resemblance is uncanny.)

If you had no idea who any of them were, we wouldn’t blame you (though Oakley in particular is notable for his charitable efforts to help LGBTQ youth). Eager to play an evil game, Eureka deliberately chose pairs that she thought would give her the best chance to win. They were: Monét X Change and Tyler, Miz Cracker and Chester, Aquaria and Kingsley, Kameron and Anthony, Asia and Raymond, and Eureka and Frankie.

That each of the makeover recipients has a history of performing removed some of the suspense from the proceedings — it was unlikely they’d freeze on the runway, for instance — it made for much better television, as everyone paired off and got to work on their transformations. It also produced an emotional moment for Kameron. This season’s quietest contestant became near-silent after Anthony revealed he was heterosexual — that prompted Kameron to reveal to camera that she was frequently bullied by straight guys for her sexuality when she was younger. Watching her body language instantly change after Anthony’s reveal was painful to see, even though they eventually warmed to one another after discovering they were similar personality types.

Anyway, let’s break down the pairings:

Monét/Tyler: This was a great twosome, not least because of Monét’s brilliant drag name for Tyler: Short Change. Constantly bouncing off one another, their chemistry worked from the moment they sat down together.

Miz Cracker/Chester: Things started a little awkwardly between Cracker and Chester as they got a feel for one another (though we laughed out loud at Cracker telling Chester she accepted his lifestyle after he revealed he was straight). Though nervous, Chester at least seemed game — tucking aside. It likely helped that Cracker, eager for her first win, was determined to make him look his best.

You can see the moment @chestersee realizes what the duct tape is for and where it goes… 😉 #DragRace pic.twitter.com/8i1mbeoO02

Aquaria/Kingsley: A challenge for Aquaria, who prefers to work solo, and that shone through in this pairing, which was one of the quietest in the work room. Kingsley seemed a little reserved, but eager to do well, and Aquaria loves to win (and serve a sickening runway look), so expectations were high.

Kameron/Anthony: Anthony admitted that his girlfriend was a huge fan of the show, which inspired his decision to appear, and once the initial awkwardness melted between them they settled into a nice chemistry.

Asia/Raymond: This was another good pairing — proving that Eureka’s plan had failed — as Raymond and Asia immediately found themselves in the same vein of trying to use drag for good. It also helped that Raymond had an eye for fashion, and could work a pair of heels. And as if we needed proof that Asia is an amazing queen (recent missteps notwithstanding), when Raymond picked out a custom outfit, Asia committed to making a second version to match. That’s confidence (and talent).

Eureka/Frankie: If you thought the combination of two over-the-top, loud, and attention-hungry personalities would make for obnoxious viewing… you were right! Frankie had previously performed as a woman, and Eureka is certainly an accomplished pageant queen, so this pairing offered little expectation of failure. Instead, it was occasionally fun, occasionally annoying. On brand for Eureka.

Once the queens and social stars had settled into their grooves — and begun teetering around the workroom on heels — in came RuPaul to offer her usual mix of advice and nerve-shattering critique. Yet again, we saw a looser, more engaged and altogether more fun RuPaul than in the last few seasons of the show. Whether objectifying Chester See — “Well that one right there won’t need no padding” — or dispensing nuggets of information, such as telling Anthony how freeing drag can be, Ru’s walkthrough was perhaps the strongest part of this episode.

The workroom took up the largest part of this episode, understandably, as the queens and social media stars worked through heels, getting tucked, and figuring out their padding and outfit choices. This was arguably the best makeover episode the show has had in a long while, because it was fun.

It also gave us one of the most incredible reveals we’ve had in a while: Chester See as Miz Cookie. Honestly, when he spun round to show Cracker’s makeup work, you could hear wigs being snatched across the country. Miz Cookie was beautiful. And it was glorious watching Chester immediately get into the groove, posing in front of the mirror as he worked his new look — or, as Eureka noted, “Miz Cookie is literally giving you Alyssa Edwards.” It’s no wonder social media has been calling for Miz Cookie to compete on Season 11.

With that in mind, this week’s tops and bottoms on the runway should come as no surprise (in order, from best to worst):

A clear top, Miz Cracker and Chester/Miz Cookie looked stunning. Cracker’s makeup skills were ridiculously on point, their costumes were beautiful, and their storyline — Cookie as Cracker’s sluttier daughter — was hilarious.

We still can’t believe that Asia O’Hara created from scratch Raymond/America O’Hara’s outfit to match her own pre-made one. While their runway wasn’t the most exciting and the family resemblance wasn’t immediately obvious, Asia’s costuming and padding work alone was enough to elevate this pairing.

Eureka played it safe this week, in both her choice of Frankie/Eufreaka, and her outfits. The family resemblance was strong, but this was middle-of-the-pack. Still, their runway was strong.

Monét X Change finally served big hair on the runway and though we don’t hate her pussycat wigs as much as the judges seem to, she did look great. The family resemblance was almost nonexistent between Monét and Tyler/Short Change, and the outfit reveal was pointless, but their costumes were fine, the hair was high, and their chemistry working together was undeniable.

Kameron Michaels opted for a beautiful, feminine, disco-inspired look… for herself. While she was quite lovely in her pale blue jumpsuit and blonde bob, Anthony/Kelly Michaels was left high and dry in a gold crop top and pants and an unflattering black wig. It didn’t help that Anthony’s boyish midriff was left exposed and there seemed to be zero attempt at creating cleavage. It removed from the fantasy a little too much.

Oh Aquaria. You were so confident, but on the main stage it all came tumbling down. Going for a regal theme — Aquaria was the queen with Kingsley/Capricia Corn a princess — could have been a winner, but Aquaria’s costumes were homemade in all the wrong ways. Her own gown was a mess of bright red fabric, but it was Kingsley who truly suffered. From the half-assed outfit to the ratty hair, Kingsley’s workroom fears about looking silly became a tragic reality on the runway. This was horrible, and our bottom of the week.

Before the runway results were announced, we has this week’s time-filling moment, as the queens mimed to RuPaul’s “Charisma, Uniqueness, Nerve & Talent.” It was random, low-budget, and while it clearly intended to mimic social media videos, it was all a but unnecessary.

Ultimately, Miz Cracker’s phenomenal work with Chester — who should be commended for giving it his all — gave Cracker her first win of the competition. We have zero arguments.

This week’s bottom three were Monét, Kameron and Aquaria. While we can’t argue that they were the weaker half of this episode, RuPaul’s choice for the lipsync left serious concerns about her decision-making. Aquaria once again skated through after landing in the bottom three, despite leaving Kingsley high and dry in the worst outfit of the night. She should have lipsynced for completely failing in every aspect of the challenge, save for makeup.

Instead, it was Kameron vs. Monét, and a bittersweet realisation that, instead of last week, this week, performed to Lizzo’s “Good As Hell,” was infinitely more deserving of a double save. Monét once again delivered a funny, confident performance, that, while a little flat in the middle, started strong and ended on a high (and yet another broken runway light for RuPaul). Kameron also turned out another tight performance, working every inch of the stage and showing off her commendable dancing skills, as well as her performative abilities. This was a tough call, and if RuPaul hadn’t wasted her double save on Eureka it would have been commendable here.

Instead, Monét was told to sashay away, and frankly, we’re pissed. Drag Race is taking a week off and won’t be back until June 7, and we swear to God, if Aquaria starts her shit again post-elimination in that episode, we’ll be calling for an uprising. She absolutely should have been in this lipsync.

And that was episode ten. What did you think? Did you gag over any moments we missed? Did Monét deserve to go? Should Aquaria have lipsynced? Are you rooting for Miz Cookie in Season 11? Let us know in the comments!