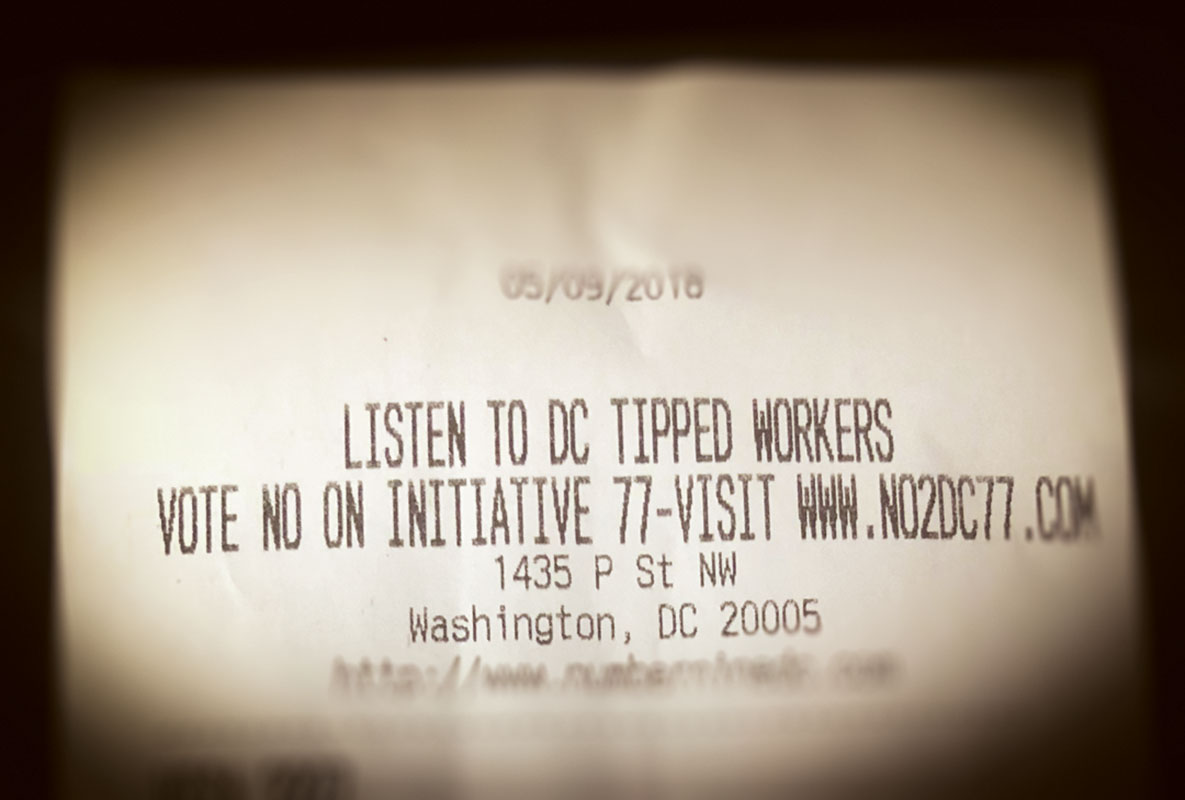 Blair Ard’s future in D.C. could depend on the outcome of a vote next month.

An openly gay 23-year-old bartender and server at Ruta del Vino in Petworth, Ard is among those workers who will be directly impacted by a new ballot measure, Initiative 77. If approved by voters on June 19, it would eliminate the wage system where servers are paid a lower hourly wage while supplementing their earnings through tips.

Initiative 77 would eliminate the so-called “tip credit,” elevating servers to the minimum wage of $12.50 an hour, equivalent to what workers in other industries earn. The hourly rate would rise to $15 an hour by 2020, with future increases tied to inflation. Supporters of the measure argue that eliminating the tip credit would ensure that servers and bartenders receive steadier incomes, benefit from better job security, and be less vulnerable to sexual harassment because their income is not reliant on tips from potential harassers.

But many service industry workers say that, with tips, they make more per hour than they would receiving minimum wage. They fear reduced take-home pay will force them to make significant cutbacks or to seek employment outside the restaurant industry.

“When I first heard about Initiative 77, I thought, ‘Oh, cool,'” Ard says. “But after I started reading up on it, I was like, ‘This is going to be the death of my life in D.C.’ If it passes, I wouldn’t be able to afford where I live, and I might even have to find a new place to work.”

Elliott Soufiane, 29, a bartender and server at Duplex Diner in Adams Morgan, estimates that if the tip credit is eliminated, patrons will tip less — or not at all. Fewer tips means he could lose anything from $9,000 to $20,000 a year.

“The way everyone’s presenting this [initiative] sounds great. It’s ‘These poor people are getting paid $3.33 per hour. Give them more money. They work hard for it,'” he says. “What they’re not being told or factoring in is that those of us who work hard and are good at our jobs already make $15 an hour or more. That’s why we haven’t complained.”

Soufiane, who’s been working in the service industry since age 16, says that he, like Ard, could soon be looking for housing elsewhere if he’s limited to earning $15 an hour with very few tips.

“I don’t know that I’d have to move out of the city,” says Soufiane, who lives in the U Street corridor. “But I don’t know whether I’d be able to afford my apartment. So I’d have to move to another quadrant, and then I’d be factoring in transportation costs, which wouldn’t be easy, given the late hours and not being able to take Metro or a bus back. I’d have to Uber, or Lyft, or what have you. That very quickly adds up.”

Others say they wouldn’t even bother to continue working if the tip credit is eliminated, including Vadim, a 39-year-old employee at a Logan Circle gay bar who asked that his real name not be used. He says that if tipping is eventually phased out, he could lose between 60 and 70 percent of what he grosses on a typical weekend.

“If the tip credit is stopped, I’d probably need a minimum wage of $30 an hour,” he says. “I wouldn’t even work for just $15 an hour and no tips…. I would look elsewhere.”

In response to Initiative 77, a coalition of tipped employees, managers, and owners of bars and restaurants has formed NO2DC77, a political action committee that is trying to encourage voters to reject the measure. No2DC77 has successfully convinced District politicians, including Mayor Muriel Bowser, Council Chairman Phil Mendelson, and six other councilmembers, to oppose Initiative 77.

John Guggenmos, the chair of NO2DC77 and co-owner of Town Danceboutique, Number Nine and Trade, takes issue with the way the initiative is worded — including its reiteration of provisions that are already law — in order to hide its intended purpose.

“Paul”, a bartender and manager of another gay bar who asked that his identity not be disclosed, doesn’t believe raising the hourly wage would immediately eliminate tipping, but predicts the practice will gradually wane over time.

As to whether patrons will be hit with higher prices, he says it may depend on what other cuts or savings businesses can achieve. For instance, a bar that has a cleaning service might choose to cut back on expenses by having the employees come in on their time off and clean the establishment themselves.

The chief organization pushing Initiative 77 is the New York-based Restaurant Opportunities Center United, an organization advocating for better working conditions and a “fair wage” for servers. Christopher Cormier Maggiano, a board member of Restaurant Opportunities Center Action, the group’s political action arm, says he is supporting Initiative 77 based on his own experience as a waiter during high school and college. He expresses concern for employees who are forced to accept sexual harassment at the hands of customers or employers. He also has concerns about enforcing laws like the requirement that employers reimburse employees who make less than the minimum wage on slow nights.

“That requires a level of enforcement that can be difficult,” he says. “It puts the onus on the employer to track that.”

He also rejects the argument that having a universal minimum wage will lead to decreased tips for service industry workers.

“That logic doesn’t make sense to me, because the ballot measure doesn’t eliminate tipping,” he says. “When you look at other cities like San Francisco and Seattle, that have both raised the minimum wage, and not had a separate tipped minimum wage, they both have similar, strong restaurant industries.”

He also says that some studies have shown waiters and bartenders in states that have eliminated the tipped wage earn about 20% more in wages. By increasing the hourly wage, employees are protected from severe fluctuations in their income, even on slow nights.

But Kelly Laczko, general manager of 18th & U Duplex Diner and the nearby Red, White and Basil, disagrees with ROC Action’s arguments for eliminating the tip credit.

“Just because something worked in San Francisco doesn’t mean it’s going to work in D.C. Each city is unique,” she says, expressing her concern that Initiative 77 will lead to price hikes and widespread layoffs as businesses try to cut costs. “In D.C., in particular, where we’re looking at a number of smaller, independent restaurants that are not corporately-owned or parts of chains, we’re definitely going to have to cut down the number of servers. And if we keep the higher number of servers at a higher hourly rate, for smaller businesses that’s going to be really tough.”

Andrew Ennis, 29, a bartender at JR.’s Bar & Grill is “baffled” that people are pushing for Initiative 77. “The reason I got into bartending was because you can pretty much make your own income,” he says. “If you want to make good money, be good, be polite, be attentive to your customers. If not, so be it.”

Ennis would have to find a new career if Initiative 77 passes, because even at a $15 hourly rate, he’d only earn $600 weekly before taxes. Under the current system, he’s managed to earn $600 in a single night.

Based on conversations he’s had with customers, Ennis says patrons would tip less — and many would even frequent the bar less often — if prices go up or bars begin tacking on a service charge. He adds that some bars might even institute a cover charge to help finance the higher payroll costs.

Jared Bernstein, a former economist for the Obama administration who works as a senior fellow at the Center on Budget and Policy Priorities, acknowledges that there is a possibility that some customers may choose not to tip or to tip less if service-industry businesses increase the price of menu items or add service charges to customers’ bills.

But he says that overall, the data from the seven states that have eliminated the tip credit indicates that not much changes other than that the poverty rate among tipped workers decreases and their take-home pay increases.

“I can introduce 5 possibilities on either side of the law and they’re not nearly as helpful as the empirical outcomes we’ve seen thus far. To me, that’s much more germane information than speculation about what might happen,” he says. “I think the thing you can say is that some of the better studies have come out of cities that are more like D.C. than not, so cities with a fairly significant high-end tipped sector, as well as a lot of low-end jobs as well.”

Bernstein rejects the argument put forth by the “no” side that smaller, more independent businesses will be more likely to close and will be replaced by chain restaurants if the hourly wage is increased. “There’s simply no correlation between the pace at which establishments are formed or go out of business, and increases in minimums or sub-minimums. The determining factor there, unsurprisingly, is the underlying strength of the economy and the incomes of people who buy the products and services.”

Benjamin Gander, 36, a general manager at Number Nine, thinks some voters are unaware that managers are already required to make up the difference if a worker makes less than the minimum wage per hour. He warns that moving from a tip credit to a guaranteed wage may reduce the quality of service, as workers will no longer be incentivized by the prospect of higher tips.

Gander, who has been bartending since college, has been able to use his tips to increasing his savings and has paid off all of his student loans. “Two-and-a-half years ago, I bought my first condo, which I’m very proud of. If the tip credit goes away, I don’t know how I pay my mortgage. Minimum wage will not cover a mortgage in D.C.”

Gander says that even if patrons don’t care about how the initiative’s effects will impact him personally, they should care about the impact it will likely have on their wallets.

“Essentially the cost is going to be put back on the customer,” he says. “Who can afford to drop $200 every time you go out? And D.C. is such a ‘happy hour’ place, where people go to the bar after work. But if there are no specials, then it’s not very happy anymore.”

Editor’s Note: This story was updated to include feedback from Jared Bernstein of the Center on Budget and Policy Priorities.