A landmark in the horror genre, this 1942 black-and-white classic from Jacques Tourneur was based on a short story by producer Val Lewton about a young woman who believes herself a descendant of a race of people who turn into big cats when sexually aroused or deeply angered. Simone Simon offered a “superbly acted” performance as the star in a film a TV Guide critic went on to laud as a testament “to the power of suggestion and the priority of imagination over budget in the creation of great cinema.” This is the film that scared Metro Weekly editor Randy Shulman’s mother so much as a child, it instilled a lifetime extreme fear of cats in her. The film screens as part of the Capital Classics series at Landmark’s West End Cinema. Wednesday, June 13, at 1:30, 4:30, and 7:30 p.m., 2301 M St. NW. Happy hour from 4 to 6:30 p.m. Tickets are $10 to $12.50. Call 202-534-1907 or visit landmarktheatres.com.

He writes the songs that make the whole world come out? A year after finally, officially announcing his gayhood, Manilow will come to the area this weekend for two concerts at Wolf Trap. Danish-American jazz/soul saxophonist Michael Lington opens. Friday, June 8, and Saturday, June 9, at 8 p.m. The Filene Center, 1551 Trap Road, Vienna. Tickets are $45 to $125. Call 877-WOLFTRAP or visit wolftrap.org.

The “nance” — as in Nancy boy, or effeminate homosexual — was a stock character in burlesque and vaudeville shows in 1930s New York, when it might have been popular to play gay on stage, for laughs, but certainly not to be gay in reality. The play The Nance shines a light on that honest-to-goodness chapter in history that even few gay people know about. Alexandria’s Little Theatre offers the first area production of the entertaining and informative comedy, a three-time Tony winner from Douglas Carter Beane (Little Dog Laughed, Xanadu) that starred Nathan Lane on Broadway in 2013. Chuck Dluhy takes on the title role at this community theater in Old Town, directed by Frank D. Shutts II. To June 23. 600 Wolfe St., Alexandria. Tickets are $19 to $23. Call 703-683-0496 or visit thelittletheater.com.

Songbyrd Music House, the small, subterranean venue in Adams Morgan, offers an enticing reason to venture up the hill for Pridegoers after the Parade: A concert by the gay rapper with the hyperarticulate flow. Born Khalif Diouf in Manhattan, Le1f was initially focused on becoming a dancer, channeling those roots into his music videos and live performance. Saturday, June 9. Doors at 10:30 p.m. 2477 18th St. NW. Tickets are $18 to $20. Call 202-450-2917 or visit songbyrddc.com.

The nationally renowned Francis was the first steelpan soloist in history invited to give a recital at Carnegie Hall in 2014, the same year she also appeared as a guest musician on — of all things — Bravo’s Top Chef. The artistic director of the Cultural Academy for Excellence, a music-based enrichment program in Prince George’s County, Francis is also currently serving as an Artist-in-Residence at Strathmore this season. Next week, she performs the first of two solo concerts as part of a series showcasing the program’s sonically diverse 2018 class. Wednesday, June 13, at 7:30 p.m. The Mansion at Strathmore, 10701 Rockville Pike, North Bethesda. Tickets are $17. Call 301-581-5100 or visit strathmore.org.

Two of this local painter’s favorite topics are the focus of a solo exhibition of his works at the Hill Center: Frida Kahlo, and his friends, primarily laborers. The latter are based on photos Amoroso took, which the artist surrounds and envelopes with retro wallpaper patterns, with designs covering the subjects’ bodies the way tattoos might. On display to June 23. Hill Center at the Old Naval Hospital, 921 Pennsylvania Ave. SE. Call 202-549-4172 or visit HillCenterDC.org.

Over the years this nerdy comedian has patented a brand of irreverent, succinct parodies of popular science fiction/fantasy franchises, everything from One Man Lord of the Rings to the more recent One Man Dark Knight. These CliffsNotes-esque theatrical shows include plenty of pop culture references and side-jokes to broaden the appeal beyond their core fan bases. Ross returns to the Birchmere with one of his originals, whittling down the first three movies in the Star Wars franchise, including The Empire Strikes Back and Return of the Jedi. Saturday, June 9, at 7:30 p.m. 3701 Mount Vernon Ave., Alexandria. Tickets are $35. Call 703-549-7500 or visit birchmere.com.

All weekend long, the Jardenea Lounge in the Melrose Georgetown Hotel will be serving up a Cosmopolitan with watermelon-infused vodka as a way to toast Capital Pride. The libation joins the regular Spring Cocktails menu of drinks, all priced at $12, ranging from the Melrose with Absolut, pomegranate and lemon juices, simple syrup, and egg whites, to the Bourbon Milk Punch with Maker’s Mark, Bailey’s Alamande, cream, and vanilla-cinnamon simple syrup, to the Sangriatini with vodka, pineapple juice, triple sec, and fruit-infused cabernet sauvignon. Thursday, June 7, through Sunday, June 10. 2430 Pennsylvania Ave. NW. Call 202-955-6400 or visit melrosehoteldc.com.

As its toast to Capital Pride, U Street Music Hall offers back-to-back nights with two of the most revered underground dance parties on the queer club scene. On Friday, June 8, the focus is on the queer origins of dirty disco and driving house, both new and old, as spun by Jackie House, Jason Kendig, and Bezier of the San Francisco DJ collective Honey Soundsystem, with opening sets from Brooklyn’s Octo Octa, with Octo Octa and D.C.’s own Outputmessage. The next night, Saturday, June 9, Uhall brings back Ultra Nate, the “Free” club singer, for another Pride edition of the deep/soul house party she throws with Lisa Moody and based in Baltimore. The Pride Deep Sugar also features sets by Wayne Davis, Andy Grant, and Katrina Mir, plus a live performance by Dawn Tallman. Doors both nights at 10:30 p.m. 1115A U St. NW. Tickets for Honey are $12 in advance, or $20 at the door, and $10 for Sugar. Call 202-588-1880 or visit ustreetmusichall.com.

The Untold Story of the Up Stairs Lounge Fire and the Rise of Gay Liberation, reads the subtitle to this book, focused on the largest mass murder of LGBTQ people in the U.S. before Orlando’s Pulse nightclub shooting in 2016. In 1973, an arson fire killed 32 people at a gay bar in New Orleans, yet the tragedy was barely talked about or reported on, largely due to the pervasive homophobia of the time. Instead, what resulted was shaming of the survivors, some of whom were fired for having been in a gay bar, and denying the Catholic victims proper burial rights. And then there was the woefully inadequate, cursory police investigation and the fact that the cause is still listed as undetermined. Fieseler, a Boston-based freelance journalist, draws on original research and interviews with people who have never previously spoken on the record to recreate what happened and help shine a new light on this early milestone in the struggle for LGBTQ visibility and rights. Wednesday, June 13, at 7 p.m. Politics and Prose at the Wharf, 70 District Square SW. Call 202-488-3867 or visit politics-prose.com.

The Rock and Roll Hotel presents concerts by three queer-centric, hip, and hip-hop-rooted artists, one per night over Pride weekend. The sharp-tongued, genderqueer Blanco, a native of Orange County, Calif., is up first, on Friday, June 8. He’s followed by Cupcakke, another provocative young rapper, who will perform a sold-out show on Saturday, June 9. Last but not least, on Sunday, June 10, comes the D.C. return of Las Vegas native Shamir “On The Regular” Bailey for a concert sure to send off Pride in frantic, fun, genre-hopping fashion. Doors for all shows at 7 p.m. Rock and Roll Hotel, 1353 H St. NE. Tickets are $25 in advance, or $30 at the door each. Call 202-388-ROCK or visit rockandrollhoteldc.com.

Born in London to Nigerian parents, the lesbian comedian followed in the footsteps of John Oliver to become the current British Correspondent for Comedy Central’s The Daily Show. A Top 10 finalist on Last Comic Standing, the first Brit to appear on Def Comedy Jam, and a recurring guest on The Tonight Show with Jay Leno (as “Madame Yashere: The Surly Psychic”), among her other credits, Yashere returns to her stand-up roots in a run of shows marking her headlining debut at the DC improv. Chicago-based comedian/storyteller Kellye Howard opens. Friday, June 8, at 7:30 and 9:45 p.m., Saturday, June 9, at 7:30 and 9:30 p.m., and Sunday, June 10, at 7 p.m. DC Improv, 1140 Connecticut Ave. NW. Tickets are $17 to $22, plus a two-item minimum per ticket. Call 202-296-7008 or visit dcimprov.com.

Charles Ross brings his one-man 'Avengers,' 'Stranger Things,' and 'Lord of the Rings' to the New Spire Arts in Frederick. 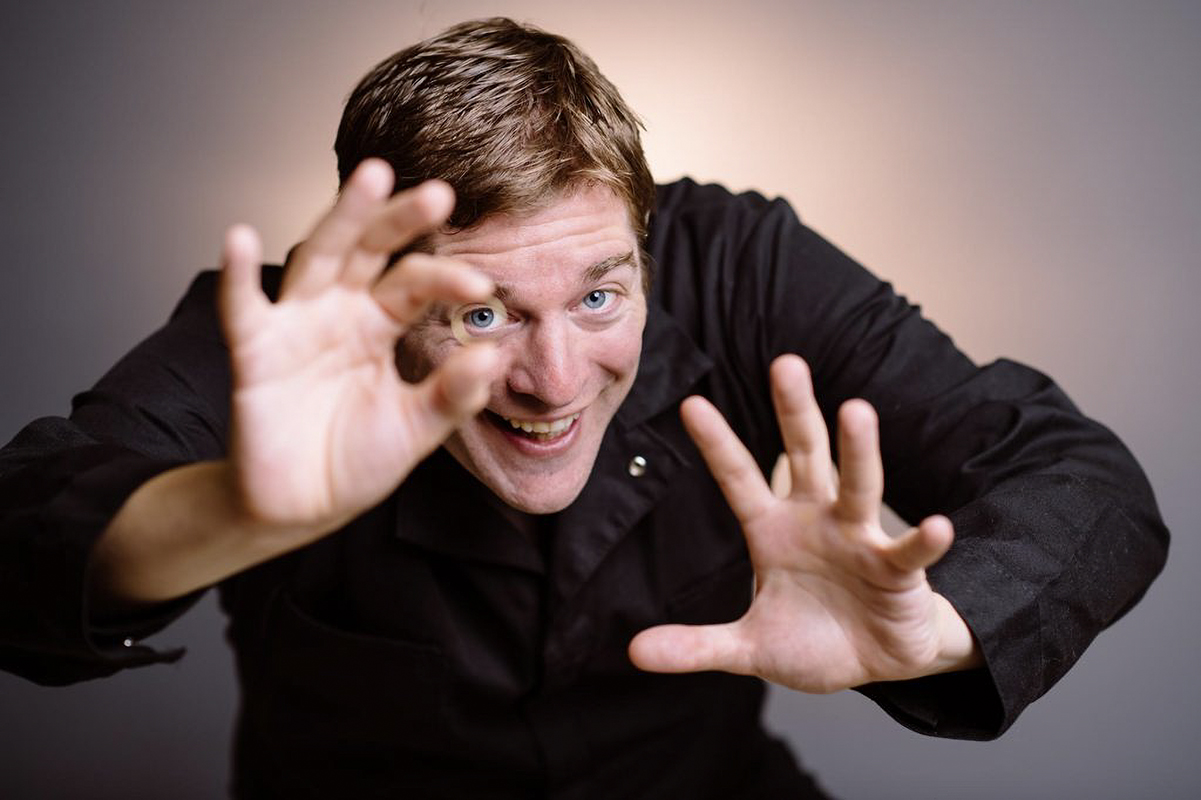 Dubbed the "Master of the One-Man Show," the pop culture-savvy Canadian performer Charles Ross has made a name for himself around the world through his special brand of irreverent and succinct performed parodies of a growing roster of popular entertainment franchises.

"When I started doing this, it was just sort of for shits and giggles," Ross told Metro Weekly in January of 2020. "I didn't really think it would work."

The struggling actor struck entertainment gold more than two decades ago with his One-Man Star Wars Trilogy, an homage that condensed the original films into a 90-minute comedic reenactment. Ross played every character, re-created the effects, performed the music, and fought both sides of the battles in the piece, which even earned him an official endorsement by Lucasfilm.