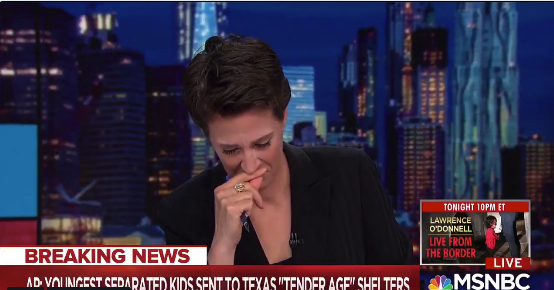 MSNBC’s Rachel Maddow broke down on-air Tuesday evening while trying to deliver a breaking news report that babies and young children are being separated from their parents at the U.S. border.

Maddow, an out lesbian who hosts The Rachel Maddow Show, was signing off on her program when she was given a report from The Associated Press detailing the three facilities that children 13 and under were being confined in.

She was unable to read the description, first asking a producer to put up a graphic and then deciding to end her segment altogether.

“I think I’m going to have to hand this off, sorry,” Maddow said, fighting back tears.

Rachel Maddow chokes up and cries on air as she struggles to deliver news that migrant babies and toddlers have been sent to “tender age” shelters pic.twitter.com/O6crm8cvyR

The AP reported Tuesday that three facilities in Texas were housing hundreds of babies, toddlers and special needs children with the government planning a fourth “tender age” shelter in Houston.

She added: “I apologize for losing it there for a moment. Not the way I intended that to go, not by a mile.”

If nothing else, it is my job to actually be able to speak while I’m on TV.

What I was trying to do — when I suddenly couldn’t say/do anything — was read this lede:

Criticism has grown over the Trump Administration’s new immigration policies after journalists and lawmakers shared images of the Department of Homeland Security housing children inside chain-link fences.