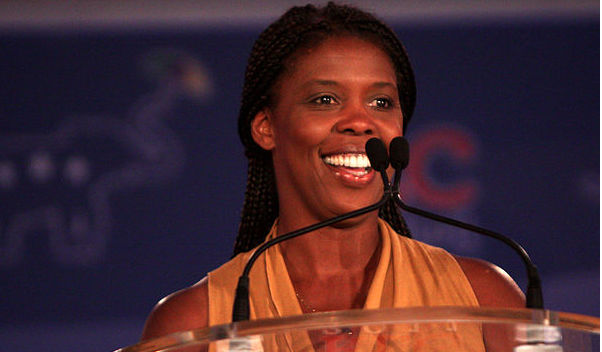 A Fox News pundit has claimed that the “B” in LGBTQ stands for “bestiality” and not “bisexual.”

Star Parker, a right-wing columnist, appeared on the Vocal Point radio show to discuss a recent column that compared LGBTQ Pride marches to Nazi Germany, according to Right Wing Watch.

“Gay Pride Month has become a time for LGBTQ storm troopers to pursue political enemies,” Parker said. “Not much different from the infamous Kristallnacht in Nazi Germany, when Nazi brown shirts took to the streets to smash windows of shops owned by Jews.”

In the interview, Parker said that in LGBTQ people’s quest to gain rights, the B is the last “vile” part of the plan.

“They keep pushing out this idea, LGBTQ,” she said. “We did the ‘L’ and the ‘G,’ they legalized marriage for themselves. We doing the ‘T’ now — the trans — and this is a big, big challenge in our society right now. They did the ‘Q’ where they’re changing all the textbooks, even as low as kindergarten, to reflect that you don’t know what you are, you’re questioning.”

She continued: “But notice they skipped over the ‘B,’ and there are some that say this ‘B’ is going to bombard us with real vileness in our society if they get what they want because it’s not about bisexuality, it’s about bestiality.”

When asked to clarify her comments, Parker told Vocal Point’s host, Jerry Newcombe, “we’re not sure what they mean by ‘B,’”something she ascribed to the LGBTQ agenda constantly changing and forwarding a more “radical” view of life.

“We do know that there is an agenda and we do know that there have been discussions about bestiality in their closed doors,” she said. “I’m just saying don’t be surprised if we find out that that ‘B’ is not what they said publicly — that we just love each other — that it may, in law, show up as something else.”

It’s not the first time Parker has made controversial comments regarding the LGBTQ community. Last year, she said that the Confederate flag and the LGBTQ rainbow pride flag “represent the exact same thing.”

Parker’s views aren’t reflected by American society as a whole — a 2016 study by Indiana University’s Center for Sexual Health Promotion found that the public’s attitudes toward bisexual men and women are “relatively neutral, if not ambivalent.”