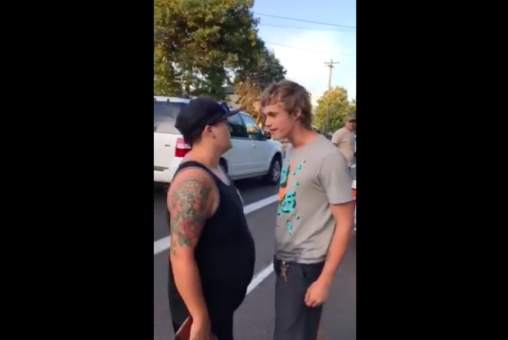 An unidentified Oregon man was caught on video cussing out a lesbian couple in Southeast Portland as part of an anti-gay rant.

Trudy and Wendy Dragoon say they were going door-to-door on Sunday night trying to find the owner of a dog that had been running loose. When they reached the intersection of Southeast Duke and Southeast 63rd Avenue, a seemingly intoxicated man left a group of friends and began hurling insults at the couple, at one point getting into Trudy’s face and threatening violence, reports Portland CBS affiliate KOIN.

That’s when Wendy Dragoon began recording the event on her phone. The man went on an anti-gay tirade for about three minutes, calling Trudy a “fat cow” and telling her “I’d fucking knock you on your fat ass.” When she responded, saying: “You think you scare me? You’re a fucking woman.”

At one point, Trudy Dragoon can be heard on video saying, “Who raised you? You should be really embarrassed right now.”

A police officer arrived on scene, and told Trudy that she couldn’t do anything until the man physically assaulted her.

Both women were upset that the police didn’t seem to be doing anything. So Trudy posted the video on Facebook, where it received thousands of views. (The video has since been made private.)

“So this just happened. After he sped up like he was going to hit is as we crossed the street,” she wrote. “And then a ‘good guy cop’ rolled up and CLEARLY did not want to help us. Before he even got out of the car he was telling us to ignore him and just walk away. Then told us he couldn’t do anything. These little fuckers live around the corner. It will take them no time to figure out which house is ours, so I guess we wait until we are physically assaulted before we can get help.”

The responding officer later returned to the scene of the incident on Monday to take statements, with a supervisor in tow.

“The Police Bureau is aware that speech, such as the speech present in this video, instills fear in members of our community.  The Police Bureau works with community members and community organizations regarding bias crimes,” Burley said. “I am not able to speak about the event, as this is an open investigation, I was not present at the time of the incident and a video does not necessarily convey everything that was occurring at the time of this incident. I will provide the officer that responded to the incident with this video so he may document the video and the Multnomah County District Attorney’s Office may review for consideration.”

One of the unidentified man’s friends, “Josh,” who appears in the video, disputes the Dragoons’ story, saying that Trudy was threatening at cussing at his friend as well during the confrontation.

On Monday, several community members angered by the policeman’s response headed to the intersection to write messages on the sidewalk in chalk and hold up signs showing support for the lesbian couple.

Trudy Dragoon says that people who spew homophobic speech need to be brought up short.

“It needs to stop,” she said. “There are too many people that get berated daily. It’s sickening.”

See also: GoFundMe pages started for victims of anti-gay bashing at 10th and U Streets NW