CVS Health apologizes for incident, and notes that the employee in question no longer works for the company 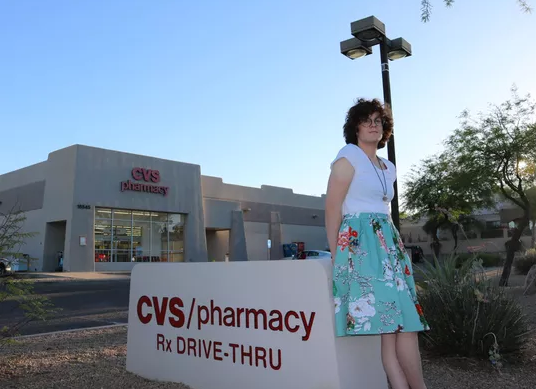 A transgender woman has filed a complaint with the Arizona State Board of Pharmacy accusing a pharmacist at a local CVS of discriminating against her when he refused to fill her hormone prescription.

Hilde Hall says she was given three prescriptions from her doctor after being advised to start hormone therapy, reports the Arizona Republic.

“I left my doctor’s office elated,” she wrote in a blog post published on the American Civil Liberties Union of Arizona’s website. “I was finally going to start seeing my body reflect my gender identity and the woman I’ve always known myself to be.”

Hall went to a local CVS in Fountain Hills, Ariz., to fill those prescriptions, but the pharmacist proceeded to treat her rudely and tried to justify his refusal to fill the prescription by citing his religious beliefs.

“Embarrassed and distressed, I nearly started crying in the middle of the store. I didn’t want to answer why I had been prescribed this hormone therapy combination by my doctor,” she recounts. “I felt like the pharmacist was trying to out me as transgender in front of strangers. I just froze and worked on holding back the tears.

“When I asked for my doctor’s prescription note, the pharmacist refused to give it back, so I was not even able to take it to another pharmacy to have my prescription filled. I left the store feeling mortified,” Hall continues. “When I got home, I called my doctor’s office to explain what happened. The office staff tried to intervene by calling the pharmacist, but he still refused to fill my prescription without explicitly explaining why. My doctor ended up having to call the prescription into the local Walgreens, where the medication was filled without question. I transferred all of my prescriptions there so that I never again have to see the pharmacist who discriminated against me.”

Hall says she filed a complaint with CVS after the incident, but didn’t feel they were taking her concerns seriously.

Arizona is one of six states that allows pharmacies and individual pharmacists to refuse to fill prescriptions on religious or moral grounds. The pharmacy isn’t required by law to refer patients to another pharmacy that will fill them, but companies may adopt their own policies regarding referrals.

CVS Health said that, by refusing to fill the prescription, the pharmacist in question violated company policies.

“CVS Health extends its sincere apologies to Ms. Hall for her experience at our pharmacy in Fountain Hills, Arizona last spring,” Mike DeAngelis, the senior director of corporate communications for CVS Health said in a statement emailed to the Republic.

He said the pharmacist’s actions do “not reflect our values or our commitment to inclusion, nondiscrimination and the delivery of outstanding patient care.” And he apologized for not following up on Hall’s original complaint.

DeAngelis confirmed that the pharmacist is no longer employed by CVS.

Hall’s story comes soon after another Arizona pharmacist — this one employed by Walgreens — refused to fill medication for a woman who needed to induce a miscarriage after the baby she was carrying stopped developing. Had she not received the medication, the baby would have been stillborn, and could have even posed a threat to her own life by causing sepsis, as occurred with a woman in Ireland who was denied an abortion in 2014.

The woman, Nicole Arteaga, has also filed a complaint with the state board of pharmacy. Unlike CVS, which has no explicit policy on referrals, Walgreens requires pharmacists who refuse to fill prescriptions to refer them to another pharmacist “in a timely manner.”

For her own part, Hall hopes CVS will not only apologize to her directly, but will take action to ensure the same situation doesn’t happen to other transgender individuals.

“Through training and written policies, the company needs to make it clear to their employees — especially their pharmacists — that transgender customers deserve respect,” Hall said in her blog post.