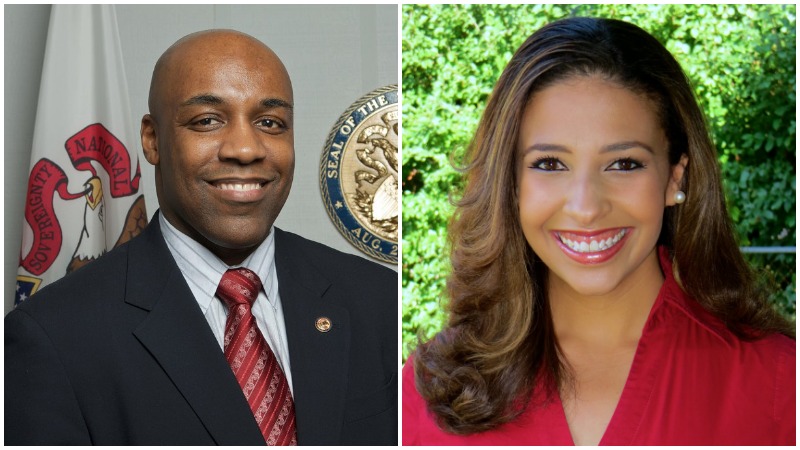 The Democratic nominee running to be Illinois’ next attorney general has accused his GOP opponent of “extremism” by highlighting anti-gay comments she allegedly made over two decades ago when she was a contestant for a state title in the Miss America pageant.

In a new campaign ad, State Sen. Kwame Raoul (D-Chicago) focuses on a story that broke in March in which Republican nominee Erika Harold was accused of having argued against placing children with gay foster parents.

“Your personal views influence what you pursue,” Raoul says in the commercial, which is titled “Safe Home”. “We can’t allow that type of extremism into the Attorney General’s Office. I prosecuted child abuse and neglect. This is the work of my life, and I am just getting started.”

Harold allegedly made the comments in 2000, when she was 19 years old and a contestant for the Miss Illinois pageant. According to reporting from NBC 5 Chicago, three individuals who had served as either judges or other pageant officials confirmed that, during a private question-and-answer session, Harold was asked to imagine she was a social worker who placed children in foster care, like her mother was at the time.

One of the officials interviewed by NBC 5 back in March even recalled that Harold seemed incredibly smart, and paused for a long time before answering the question. Another official said Harold referenced reading the Bible daily and said her religious beliefs opposed subjecting children to the “gay lifestyle.”

While Harold did not win that year, she eventually went on to be crowned Miss Illinois and Miss America in 2003.

At the time the initial story broke in March, many political observers noted that it was likely that the eventual Democratic nominee would use those marks against Harold. Harold is considered a rising star in the Republican Party and would be one of the few African-American Republican women in the country to hold statewide office should she be victorious in November.

Just a week after the story broke, Harold defeated her primary opponent, Gary Grasso, by an 18-point margin, while Raoul emerged with the Democratic nomination from an eight-person field with a narrow 3-point victory over former Gov. Pat Quinn.

Following Raoul’s launch of the commercial attacking Harold for her “extremism,” CBS 2 Chicago investigated the story, focusing on allegations made in the book Being Miss America, by 1998 titleholder Kate Shindle, in which Shindle — herself a former Miss Illinois — wrote about Harold’s alleged response to the judging panel during the private session.

But CBS 2 ruled that the charge was “strong, but at best, it is a second-hand reference from an unidentified source.”

Harold, as she did in March, says she doesn’t remember making those comments to pageant officials.

“I don’t recall the specific exchange that the sources allege,” she told CBS 2 in an interview. “If I said it, it was absolutely wrong.”

Raoul says he’s skeptical of her inability to remember, saying, “If you had been accused of saying you’d place a child in the home of abusers, you would remember whether or not you made those comments.”

For her part, Harold says her positions on gay parenting have evolved.

The campaign is likely to get nastier in the coming months, as Harold has used her own commercials to attack Raoul for being part of a culture of corruption in the much-vilified and much-hated (and currently Democratic-controlled) General Assembly in the state capital.

The Harold campaign has also lobbed another charge that, 20 years ago, as an attorney Raoul argued in favor of returning two neglected children to a home where a child had died of Shaken Baby Syndrome. Raoul responded, saying he was acting as a professional advocate, not reflecting his own beliefs.

See Raoul’s ad against Harold below:

John Riley is the local news reporter for Metro Weekly. He can be reached at jriley@metroweekly.com
← Previous Story Glenn Close: Directors should “go out of their way” to cast transgender actors
Next Story → Gay San Francisco police officer files sexual harassment and discrimination lawsuit