OutWrite 2018: The Art of Three by Erin McRae and Racheline Maltese 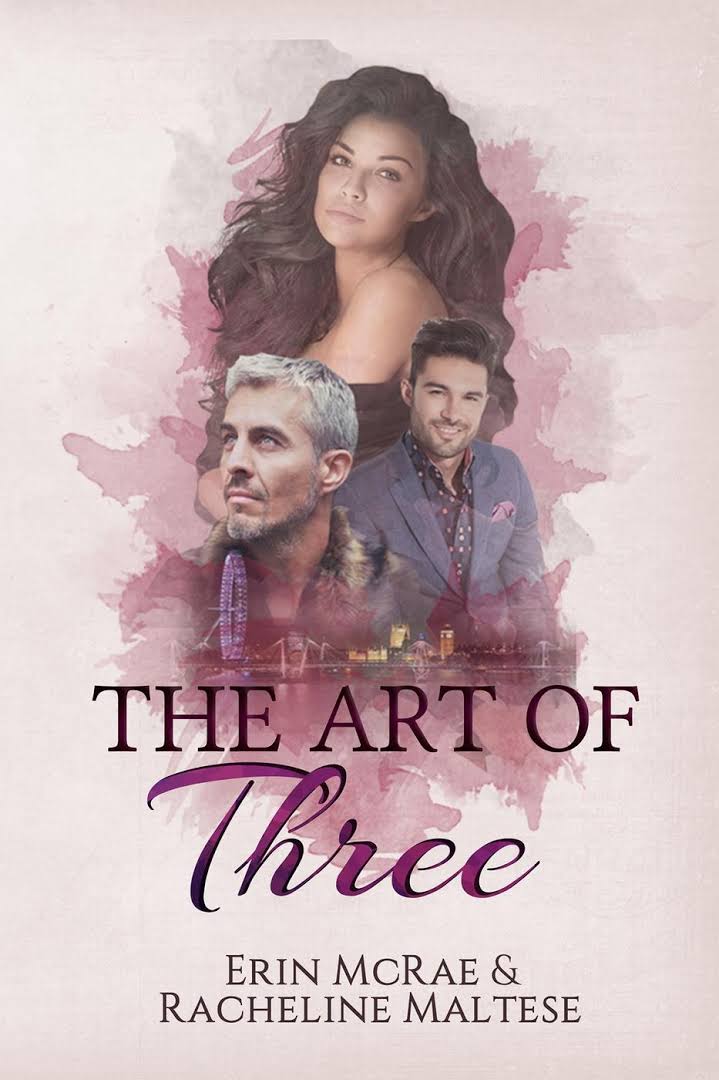 The next night Jamie went out to dinner with Aoife and Patrick, where he apologized to both of them for blowing off Aoife’s phone calls. He might not have been able to help in any particular way, but he could at least have been an ally to them both while Aoife had worked through matters with their parents.

That evening, up in Jamie’s room at the family house, the siblings talked for hours. About Aoife’s plans for the wedding, but mostly for the life she wanted to build outside of the home she’d lived in her entire life and that their parents had probably thought she would never leave. The transition was going to be immense for all concerned and was going to take time. Now that Aoife had decided, Jamie wasn’t clear on how patient she was inclined to be. They were alike in that. They were both a little greedy for all the world could give them, no matter how strange, no matter other people’s doubts.

“Can I tell you about something?” Jamie said after their mum had come in to say good night and admonish them, fondly, not to stay up too late.

Jamie flopped back on his bed and stared up at the ceiling. “So I told you I’m seeing someone.”

“Yeah, even though you refuse to give me any details.”

“The someone I’m seeing is actually two people.”

“And they don’t know about each other?” she guessed.

“No. They’re married. To each other,” Jamie clarified.

“But they don’t know you’re dating both of them?”

“Still no. I’m dating a married couple. Like. Jointly.”

“That seems confusing,” Aoife’s face twisted up as she said it.

“Somebody I met at work. And his wife.”

The confusion in Aoife’s face turned to judgment. “Who, Jamie?” She was insistent.

“You know how I was in the movie with Callum Griffiths-Davies?”

Jamie sat up and waited for his sister’s giggles to run their course. But they didn’t seem to be subsiding. Which, if he looked at the situation — both that of his relationships and of this conversation — he could hardly blame her for.

“You’re dating Callum Griffith-Davies. And his wife?” she finally managed through gasps of mirth.

Aoife pressed her hands over her mouth; the giggles starting again. Then she took a deep breath and very cautiously slid her hands to her cheeks so she could talk. “You’re dating Callum Griffith-Davies, the movie star, and his wife,” she repeated.

Jamie laughed. It was pretty funny to hear it aloud from an uninvolved person. “Yes.” Maybe if he was lucky his parents wouldn’t believe him either.

“Have you told Mum and Dad?”

“What do you think? Especially after the fit they threw about you and Patrick? How am I supposed to?”

“You should,” Aoife said, sobering. “If you’re serious.”

“Of course I’m serious! And they’re serious about me. Which is why I have this problem now.”

“A lot of people would like that problem. He’s hot. Mum’s going to go spare.” Aoife pointed out. Then she went starry-eyed.. “Will you bring him to my wedding?”

Jamie dropped his head into his hands and moaned at what was a fair, generous, and likely deeply unwise request.

Aoife patted him unsympathetically on the shoulder.

Jamie waited until the next evening to broach the topic. He was helping his mum wash the dishes while his dad was out of earshot in the living room watching the news. Aoife was at work. As much as he’d been glad to come to her defense the other day, he didn’t want her to have to come to his.

“So, er, I wasn’t sure how to bring this up,” Jamie said as he scrubbed water droplets from a plate with a towel his mother had had since he was a kid. “But I mentioned I’m seeing someone?”

“You’ve mentioned. In the vaguest possible terms,” his mother said. She looked amused. “Am I going to get details now?”

“It means they asked me to Spain for Christmas and for a wedding, and I said yes because they’re important to me, and I didn’t tell you before cause I knew you were going to be mad.”

“This is where you give me a name, Jamie,” his mother said after the briefest of hesitations. Jamie noted, with some alarm, that she’d set down the glass she was washing out.

His mother’s eyebrows went up. “Is this Callum, your coworker, Callum?”

“I thought he was married. I’ve seen her in magazines. Pretty Spanish woman.”

“They’re separated? Getting a divorce?”

“James.” His mother looked horrified. Jamie shrank back. Nobody called him that, ever, except his mum, and only when he was in very, very deep trouble. “What are you telling me? Is he cheating on his wife with you?”

“No.” Jamie kept rubbing the towel over the plate, even though he’d dried it ages ago. “I’m dating her, too.”

He had wondered if his mum might yell. He decided the stunned silence that stretched on — and on — was far worse.

“I’m sorry, I think I misheard you,” Maureen finally said.

Jamie shook his head. “You didn’t or you’d be talking.”

More silence. Then she said, “This isn’t what we meant by accepting your equal opportunity bisexuality.”

She wasn’t joking, not really, and Jamie had to restrain a wild and inappropriate urge to laugh.

“It wasn’t like I planned it,” he said, knowing that wasn’t much of a defense against anything his mother could possibly be thinking. But he needed to stall for time as he looked for the right opening to explain. A petulant we’re in love was definitely not going to cut it.

Jamie was dimly aware that she might be working up to that place where she enjoyed her outrage, which definitely wasn’t going to help his case.

Maureen set a dish down on the counter with more force than was strictly necessary. Jamie flinched. “Which of my eight thousand objections would you like first? I’m perfectly happy to argue about bad translations and believe the Church is just wrong about homosexuality, but there aren’t exactly any three-person relationships lurking in the Bible ——”

“If you say The Holy Trinity, God help your soul.”

“That’s not what I was going to say!”

“Good. But there is a list available for this fight, and we should start somewhere.”

“Fine, what’s the list?” Jamie asked, even if he could tell he was irritating his mother even more by being reasonable.

“In no particular order: Age differences will break your heart; Hollywood decadence is a slippery slope toward a hell likely filled with Scientologists; they’re married to each other, which gives you no security; and two against one isn’t a game anybody wins.”

Jamie picked up another wet dish out of the strainer and concentrated on it. He was horribly afraid he was going to laugh at the accidental sexual innuendo of the last item on her list and was well aware that if he did, his mother would lose her mind.

“I bought a book,” he blurted. “About polyamory.” It was better than laughing.

Maybe not that much better, he reflected, as his mother turned disbelieving eyes on him. He didn’t have the heart to tell her that Callum’s reaction to said book had been the same.

An excerpt from The Art of Three, first published in 2017, and available from Amazon.com. For more information on Erin McRae and Racheline Maltese, visit Avian30.com.

← Previous Story OutWrite 2018 is a chance to “hear from folks both local and national who are telling queer stories”
Next Story → OutWrite 2018: Silver Moon by Catherine Lundoff