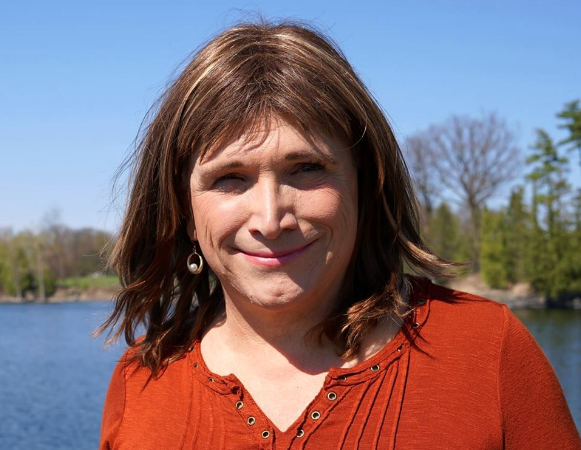 Christine Hallquist has made history as the first transgender to win a major political party’s nomination for governor.

On Tuesday, Democratic voters in Vermont picked Hallquist to lead their fight against incumbent Republican Gov. Phil Scott this November.

Hallquist, a progressive who campaigned on pursuing efforts to develop renewable energy alternatives, broadband access for rural communities, a $15 minimum wage, and a state version of “Medicare for all,” bested three other Democrats by a wide margin.

She was backed by the Justice Democrats, a group that opposes corporate contributions in elections, as well as the Working Families Party and Trans United Fund.

At least in primary voting, a substantial turnout among Democratic voters meant Hallquist actually bested Scott by about 3,000 raw votes.

In an interview with CNN’s Don Lemon, Hallquist said that, like many other Democrats, she was partially motivated to run for office by Donald Trump.

“There’s a systematic attack and it’s going to start with the most marginalized of the communities, so the fact that our President has gone after the transgender community is no surprise and I think everybody should be afraid,” she said.

“People like myself and who normally wouldn’t be in politics are rising up all over [in response to Trump’s election] and I think that’s what healthy democracy looks like,” she said. “I’m hoping that years from now we can look back and say, ‘Isn’t American democracy wonderful: we survived a death spot.'”

Hallquist will be one of four LGBTQ gubernatorial nominees running this cycle, along with Texas’ Lupe Valdez, a lesbian and former Dallas County sheriff, openly gay Colorado Congressman Jared Polis, and incumbent Oregon Gov. Kate Brown, who is bisexual.

Annise Parker, the president and CEO of the LGBTQ Victory Fund, whose mission is to get more LGBTQ people elected to public office, praised Hallquist’s victory in a statement.

“Christine’s victory is a defining moment in the movement for trans equality and is especially remarkable given how few out trans elected officials there are at any level of government,” Parker said. “Many thought it unthinkable a viable trans gubernatorial candidate like Christine would emerge so soon. Yet Vermont voters chose Christine not because of her gender identity, but because she is an open and authentic candidate with a long history of service to the state, and who speaks to the issues most important to voters.

“Christine’s business experience and progressive vision for Vermont means she’s perfectly-positioned to take on Governor Scott — whose approval numbers continue to plunge because of his inability to manage the state government and his failed attempts to hide his conservative policy positions,” added Parker. “When voters head to the polls this November, we are confident Vermonters will make her the first openly trans governor in the nation and just the second openly LGBTQ person elected governor in American history.”

According to recent polling, Scott’s support among Republicans has eroded since he signed several gun reform bills into law.

But he continues to be much more popular among Democrats, 61% of whom approve of his job in office — making the fall election an uphill battle for Hallquist, despite Vermont’s Democratic lean.

Currently, there are 13 openly transgender people serving in elected office across the United States, and the Victory Fund has endorsed seven others this cycle.

In Minnesota, out lesbian Angie Craig advanced to the general election for the state’s 2nd Congressional District, where she will face off against U.S. Rep. Jason Lewis, who recently came under fire for both anti-woman and anti-LGBTQ comments he made when he was a radio talk show host.

Several other candidates who were considered LGBTQ allies and were endorsed by the Human Rights Campaign also won their primaries, including Josh Kaul, who is running to be Wisconsin’s next attorney general, Democratic U.S. Reps. Ron Kind and Gwen Moore of Wisconsin, and Democratic U.S. Senators Amy Klobuchar and Tina Smith of Minnesota.

Smith is running in a special election to fill out the remaining two years of former Sen. Al Franken’s term. Franken resigned last December after being accused of groping or sexually harassing several women.

In Wisconsin’s 1st Congressional District, Trans United Fund had previously endorsed Randy Bryce, a former steelworker and progressive who has also been endorsed by the Justice Democrats and the Working Families Party.

On Tuesday night, Bryce won the Democratic nomination for the seat being vacated by Paul Ryan — one of the seats that Democrats think is essential to winning back the majority in the U.S. House of Representatives.