By John Riley on October 18, 2018 @JohnAndresRiley 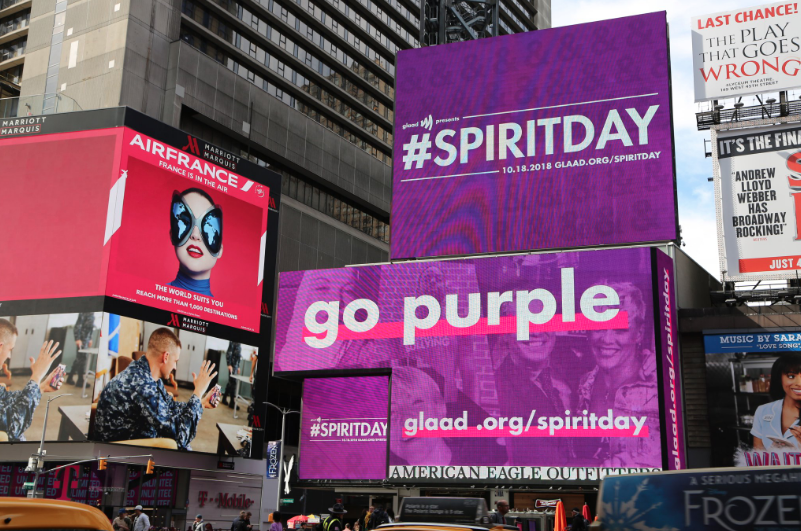 Companies, celebrities, and students across the nation are donning purple to celebrate Spirit Day, a day dedicated to combating bullying and harassment against LGBTQ youth and remembering those LGBTQ youth who have committed suicide.

As part of Spirit Day, people are encouraged to take the Spirit Day pledge promising to stand up to bullying in all forms. The event is most commonly celebrated in schools, but celebrities and major corporations have gotten in on the action in recent years.

Each year, GLAAD helps hundreds of celebrities, media, brands, landmarks, sports leagues, faith groups, school districts, colleges and students to show their support for LGBTQ youth by wearing purple clothing or changing their branding to purple, the color that signifies “Spirit” in the Pride flag.

According to statistics from GLSEN’s 2015 National School Climate Survey, 85% of LGBTQ-identifying students said they’d been verbally harassed due to their sexual orientation or gender identity, and 63% reported hearing negative comments or remarks due to their gender expression. More than 57% of LGBTQ students report feeling unsafe at school.

A similar study by the Human Rights Campaign and researchers at the University of Connecticut found that LGBTQ teenagers have a high incidence of depression, and 95% report having trouble sleeping at night. LGBTQ youth of color and transgender teenagers also experience elevated stress, either because of their race, ethnicity, sexual orientation, or gender identity, or some combination of all four.

That study found that only about one-quarter of LGBTQ youth feel safe in their classrooms, and only 5% say their teachers or school administrators are supportive.

At GLAAD’s prompting, Twitter launched a #SpiritDay hashtag and purple heart emoji to mark the day.

On Wednesday evening, the day prior to Spirit Day, singer, songwriter, activist, and GLAAD Board Member Justin Tranter hosted “BEYOND,” a Spirit Day concert benefitting GLAAD in Los Angeles.

Kellogg Company launched a special edition “All Together” cereal bringing together a combination of its various brands at the company’s New York City cafe to help raise money for Spirit Day. The special edition “All Together” box features a number of Kellogg cereal mascots mixed together. All proceeds from the cereal purchase on Spirit Day will directly benefit GLAAD.

Other companies participating in the day by advocating for anti-bullying efforts include Hilton, Target, Wells Fargo, Barilla, Johnson & Johnson, the NBA and WNBA, Kirkland & Ellis, and Zipcar.

Help us drive acceptance forward with @GLAAD this #SpiritDay, and pledge to take a stand against bullying: https://t.co/wfrCfuS8ps pic.twitter.com/ATqW8Hplou

Several television and radio networks will also participate in the day by promoting it via word of mouth or donning purple clothing when they are on air. Among those participating are ABC/Disney, CBS, FOX, Freeform, HBO, iHeartRadio, NBC, Showtime, Telemundo, TNT/TBS, and Univision. Shows whose hosts are participating in the day include: CNN New Day, Despierta América, E! News, Entertainment Tonight, Extra, Full Frontal with Samantha Bee, Good Morning America, Jimmy Kimmel Live!, The Late Show with Stephen Colbert, Live with Kelly and Ryan, MSNBC Velshi & Ruhle, The Talk, TODAY, The View, and Watch What Happens Live.

Let’s go Purple! Proud to be wearing #Purple for #SpiritDay – together we can take a stand against bullying and show solidarity with LGBT community @adamsreed @CNBCJulianna @CNBCi @cnbcipr pic.twitter.com/sDuhBwWWaa

In honor of @glaad's #SpiritDay, we're wearing purple to support the #LGBTQ community! 💜#ChooseKindness and help put an end to bullying: https://t.co/naOlMAKEIs pic.twitter.com/1DxFygmdEH

Singer Britney Spears, the winner of the Vanguar Award at the GLAAD Media Awards, will make a special appearance at a Spirit Day rally in Toshiba Plaza, on the Las Vegas strip, at 6 p.m. The event will be broadcast live on lesbian talk show host Ellen DeGeneres’ YouTube channel.

Even sports teams got into the celebration, with two baseball teams, the Kansas City Royals and Cincinnati Reds tweeting their support for Spirit Day and combating bullying.

We're proud to join @MLB by going purple and taking a stand against bullying. #SpiritDay pic.twitter.com/PYHsW3za3T

The Reds join MLB in going purple today in honor of #SpiritDay to speak out against bullying & support LGBTQ youth. https://t.co/vKlDVBFioh pic.twitter.com/IjjoCJZxfX

Other sports figures taking a stand against bullying for Spirit Day include Nascar driver Stephen Rhodes and NBA stars Reggie Bullock of the Detroit Pistons, John Henson of the Milwaukee Bucks, Michael Beasley of the New York Knicks, and Jeremy Lin of the Atlanta Hawks. GLAAD partner Athlete Ally, a nonprofit dedicated to eliminating homophobia and transphobia in sports, will also participate.

“Spirit Day is a day of national importance that highlights the serious issue of bullying and its disproportionate impact on LGBTQ youth,” GLAAD CEO and President Sarah Kate Ellis said in a statement. “It also sends powerful messages of support, letting LGBTQ and other marginalized youth know that they are not alone — something sorely needed in our culture today.”