David Gordon Green's "Halloween" picks up forty years after the original, and is only half as scary

By Randy Shulman on October 18, 2018 @RandyShulman 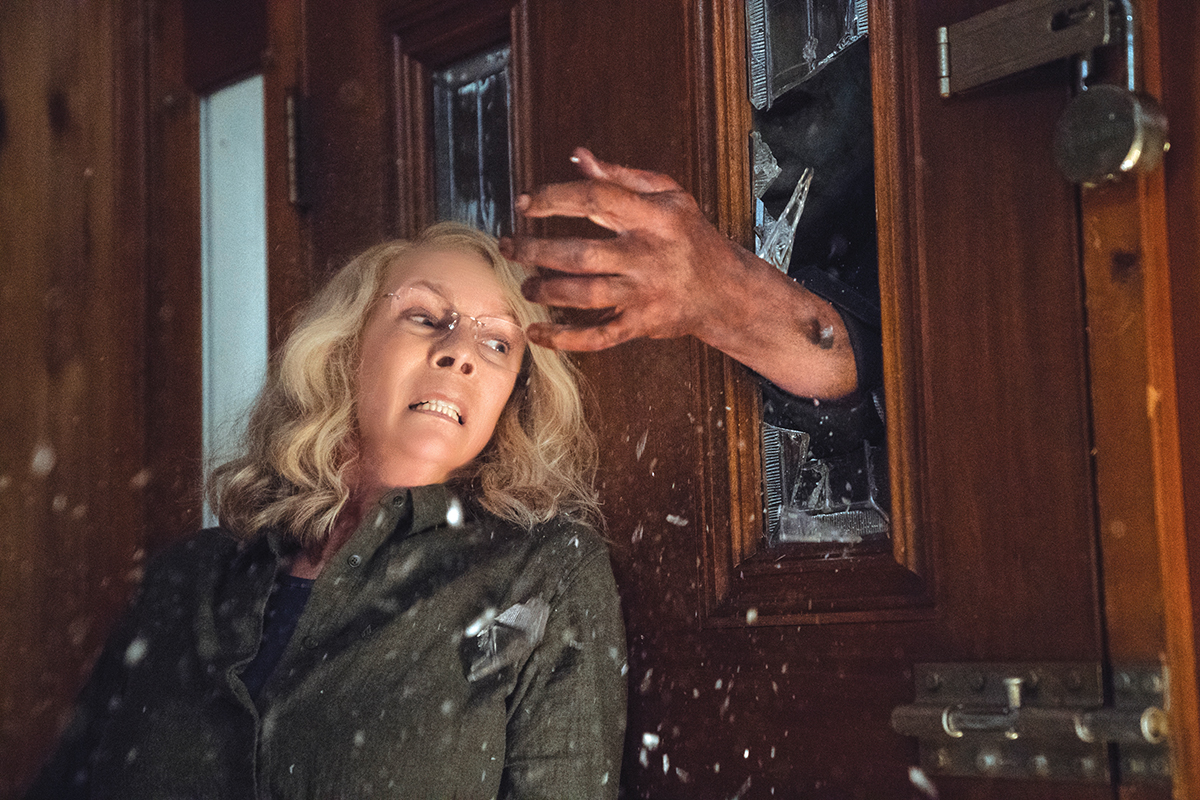 In 1978, an unknown director named John Carpenter changed the history of horror films with his low-budget shocker Halloween. While slasher films were not uncommon — Hitchcock popularized the genre in 1960 with Psycho — the format they followed was more along the lines of a whodunit. Carpenter changed all that with the creation of Michael Myers, a personification of pure, relentless evil (in a William Shatner Captain Kirk mask, of all things). He paved the way for a deluge of similar bloodthirsty icons — Friday the 13th‘s Jason Voorhees, Nightmare on Elm Street‘s Freddy Krueger, Child’s Play‘s Chucky — eager to slice and dice their way into our collective nightmares. For a time, it worked, until the genre lapsed into self-parody, a decline from which it hasn’t really recovered. Still, Carpenter’s original film remains, arguably, the most important of the genre — not least because it was one of the few that was genuinely, truly scary af.

From the jaw-dropping “one take” opening, in which a young boy dons a clown mask, picks up a knife and brutally slaughters his sister, to the way in which that same killer, 15 years later, terrorizes a gaggle of teenagers, the film remains a master class in how to execute screen terror. The lone survivor among those teens was Laurie Strode (Jamie Lee Curtis, a newcomer at the time who gave a brazen, career-making performance), and the scene in which she comes upon her multitude of dead friends, one after the other, is the stuff that fuels the worst dreams imaginable.

What the original Halloween lacked in subtlety — the teens were being punished for their hyper-sexual ways, while Laurie, in a plaid skirt and knee-high socks, the only chaste one of the bunch, survives — it made up for in intense, effective scares.

Unfortunately, the movie also gave rise to an abundance of worthless sequels and remakes, including the befuddling and awful Halloween III: Season of the Witch, which had nothing to do with Michael Myers and instead centered around a trio of haunted Halloween masks set to presumably rid the planet of its children. More chocolate for the adults, I presume the thinking went.

Flash forward to 2018 and Halloween (★★) is back. This time, however, the filmmakers are in reboot mode, erasing everything that came after the original movie and picking up the story forty years later. Laurie (Curtis), forever traumatized by her experience, has failed at two marriages and is estranged from her daughter Karen (a shrill, useless Judy Greer) and, to some extent, granddaughter Allyson (a somewhat effective Andi Matichak). For years, she has prayed for for the escape of Michael Myers, she tells Officer Hawkins (Will Patton), so she could kill him.

“Stupid thing to pray for,” he says with a scowl.

Michael, who has spent the last 40 years in silence, living out his life sentence in an asylum under observation, is being transferred on this very Halloween night to a new facility. OF COURSE HE IS! What do you think is going to happen the hapless driver of that bus? Or to the father and son who come upon the stopped bus? Or to any policemen stupid enough to investigate mysteriously stopped vehicles? Or to anyone else in the sleepy haven of Haddonfield, Illinois, stupid enough to leave their doors unlocked, windows ajar, and kitchen knives on the counters in plain view? 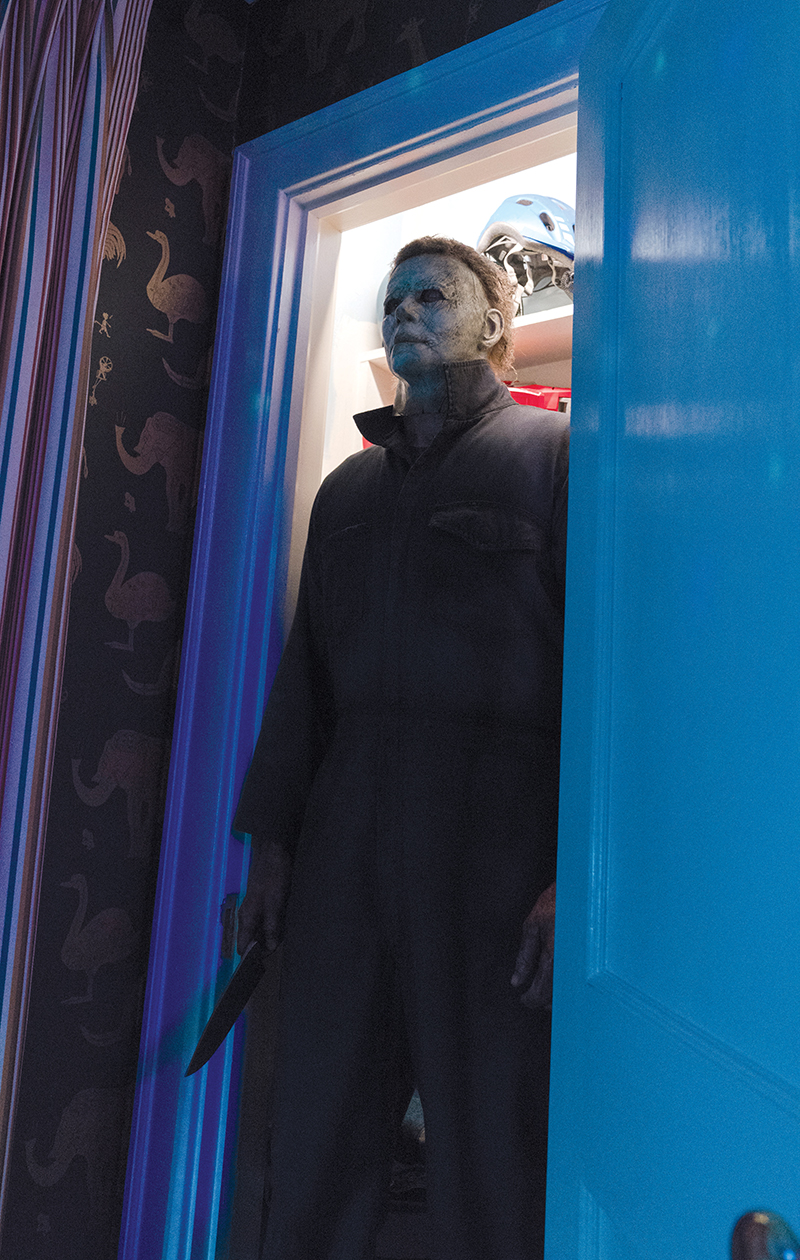 Directed by David Gordon Green (Pineapple Express), the new Halloween is turkey-stuffed with moments meant to service diehard fans of the series. It winks at itself so much, you’d think it had something it its eye. The movie ramps up the body count in supremely gore-ridden fashion that recalls the Friday the 13th series far more than the original Halloween. Ever wondered what it looks like when a knife juts through a neck? You’ll find out here. Want to see a boot crush a head like a pumpkin? Look no further.

Virtually every primary character we meet in the film — and a few randos — have an unfortunate run-in with Michael, whose murder spree seems simultaneously random, coincidental, and calculated. How is it that every single one of Allyson’s friends is murdered? Did Michael somehow get ahold of her high school yearbook?

Let’s not go into the ridiculous details about how Michael gets his iconic mask back, save to say it would be more believable if he’d popped into a nearby Party City. Still, the sequence, set in a wretched gas station restroom, is the one of the few times Gordon Green creates a real moment of suspenseful, intense horror. The other time he gets things right is a terrifying scene set in a backyard with motion detector lights. The rest of the time, the scares are less ingenious, less jolting, altogether less.

As Laurie, Curtis gives a performance that is far beneath her talents. She’s essentially playing a crazy cat lady in a wig who’s adept at weilding a rifle. In interviews, Curtis has tried to intellectualize the film, claiming it’s about trauma and is so very relevant to our times. It’s a gore-drenched slasher film, Jamie, let’s not make it any more than it is. It exists to cash in on our inexplicable thirst for watching teens get impaled on sharp objects.

More inexplicably, Gordon Green tries to inject humor into the proceedings, and while horror can benefit from a few laughs here and there, the constant jokiness works against the movie. Things should be building to a scare, not a guffaw. At one point, Michael’s current doctor, played with scene-chewing abandon by Haluk Bilginer, shouts to Haddonfield’s residents “I’m a doctor! Lock your doors!”

There are even times when Halloween plays out like a video game, with Michael picking up a hammer to pound a random woman enjoying a sandwich at her kitchen table, only so he can upgrade his weapon to a kitchen knife. The narrative leads to a final, insanely violent showdown between Laurie and Michael in her isolated “compound,” and while it has some chilling moments, and an ending that seems to rule out any possibility of a sequel, we all know that the box office will ultimately rule whether or not the knives, guns, and crowbars are drawn for a rematch.

Maybe they ought to revisit those killer masks….

Halloween is rated R for violence and opens in theaters everywhere, including AMC’s Uptown Cinema, on Friday, Oct. 19.

Randy Shulman is Metro Weekly's Publisher and Editor-in-Chief. He can be reached at rshulman@metroweekly.com.
← Previous Story Film Review: “First Man” presents a thoughtful account of a thrilling space race
Next Story → Rowan Atkinson on returning to Johnny English and his love of comedy