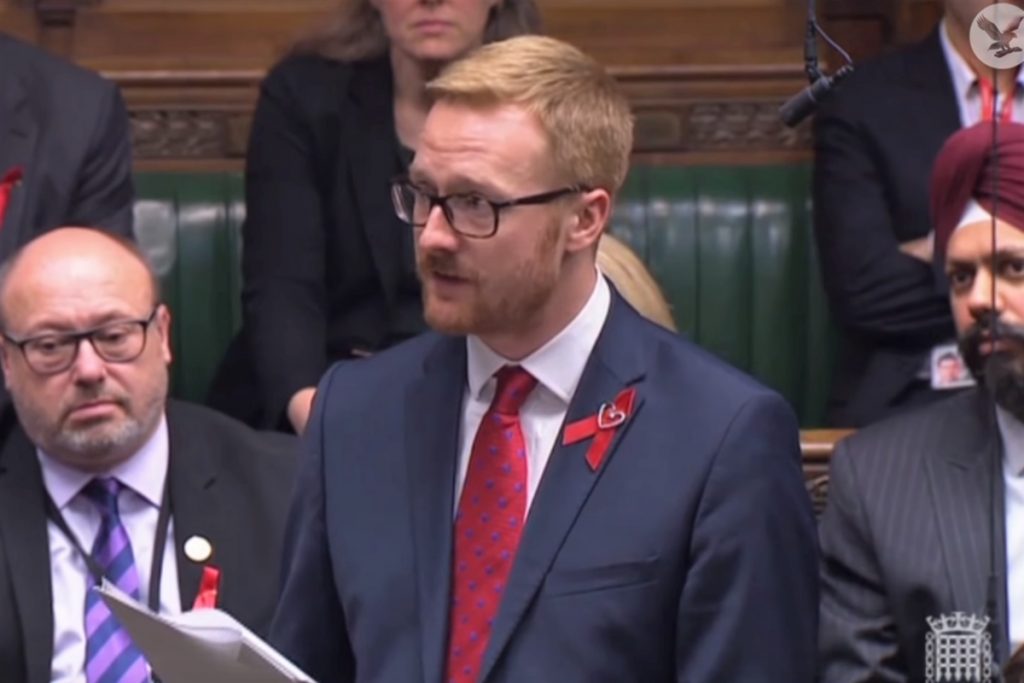 A gay British politician has come out as HIV positive in a moving speech to Parliament.

Lloyd Russell-Moyle, a Labour Member of Parliament, revealed his status during a debate on public health in the House of Commons.

He specifically timed his announcement to coincide with the 30th anniversary of World AIDS Day on Saturday, Dec. 1, BBC News reports.

“Next year it will be 10 years since I became HIV positive,” Russell-Moyle said. “I was 22 years old, and diagnosed early. Since then I have been on world-class treatment provided by the NHS, so I have not only survived, I’ve prospered, and any partner I have is safe and protected.”

Russell-Moyle, who at 32 years old is the first MP to come out as HIV positive in Parliament — and only the second to publicly disclose their status — said that the initial diagnosis was a “real shock,” but that it was “not the end of the world, even though it might feel like that for a few seconds.”

“It’s been a long journey, from the fear to acceptance, and from today advocacy, knowing my treatment keeps me healthy and that it protects any partner I have,” he said, adding, “I finally wanted to be able to stand in this place and tell all those out there living with HIV, that their status does not define them.

“We can be whoever we want to be,” he continued, “and to those who haven’t been tested, maybe because out of fear, I say it is better to live in knowledge than die in fear.”

During his speech, Russell-Moyle tackled the stigma that still exists about HIV, PinkNews reports.

He read quotes from people who described those living with HIV as “fags getting what they deserve,” and slammed anyone who would “weaponise HIV to attack LGBT people.”

“The disease is still deeply misunderstood,” he said. “Etched into much of the public’s memory as a death sentence, HIV conjures images of gravestones and a life marked by tragedy.

“The reality is that today, the prognosis is wildly different to what it was when it was brought to the public’s attention. If treated, someone who is HIV positive, like myself, can expect to live a long and full life with little to no side effects from the drugs regime.”

Ultimately, Russell-Moyle said he hoped that his coming out would help “defy the stigma around the disease.”

“I hope that more people will understand that effective treatment keeps people who are HIV positive healthy, and it protects their partners,” he said. “That my story might encourage others to get tested and ultimately begin their treatment earlier on. Those who have HIV or who have recently been diagnosed should know that they are free to pursue every aspect of public life without hindrance.”

Ian Green, chief executive of sexual health charity the Terrence Higgins Trust, in a statement said the charity was “extremely grateful to Lloyd, and his decision to use his platform to help us work toward zero HIV stigma and zero HIV transmissions in the UK.”

He continued: “It is so important for people living with HIV to be better represented across public and political spheres, and as a serving MP to be openly living with the virus, Lloyd is already impacting positive change.”

Also Read: Politics of Prevention: Us Helping Us’ DeMarc Hickson on the Future of HIV/AIDS

Rhuaridh Marr is Metro Weekly's managing editor. He can be reached at rmarr@metroweekly.com.
← Previous Story “I f**king hate gays”: Man goes on homophobic tirade after being denied entry to nightclub
Next Story → Pope Francis complains about homosexuality being “fashionable”