By Randy Shulman on December 20, 2018 @RandyShulman

“The chef is in the kitchen!”

And with those not so coded words, loudly intoned by a Congressional aide, House Speaker-designate Nancy Pelosi magically materialized on 17th Street last Friday morning, Dec. 14, stopping in front of Floriana Restaurant to admire the restaurant’s large, lavish Christmas Tree, which bar manager and beverage director Dito Sevilla had dedicated in her honor. (The #NancyPelostree he later called it in an Instagram hashtag.)

“Last year’s theme was ‘Day of the Dead,'” said Sevilla before the California Democrat’s arrival. “The kids loved it, but a lot of the adults thought it was satanic. So this year I said, ‘No black and orange, we’re gonna go full Americana, and satisfy everybody!’

“And the beautiful thing is, even with Nancy on top,” he continued, gleefully pointing to the tree-topping photo of Pelosi, gavel in hand, “Republicans can’t disparage it, because American flags are all over it!” 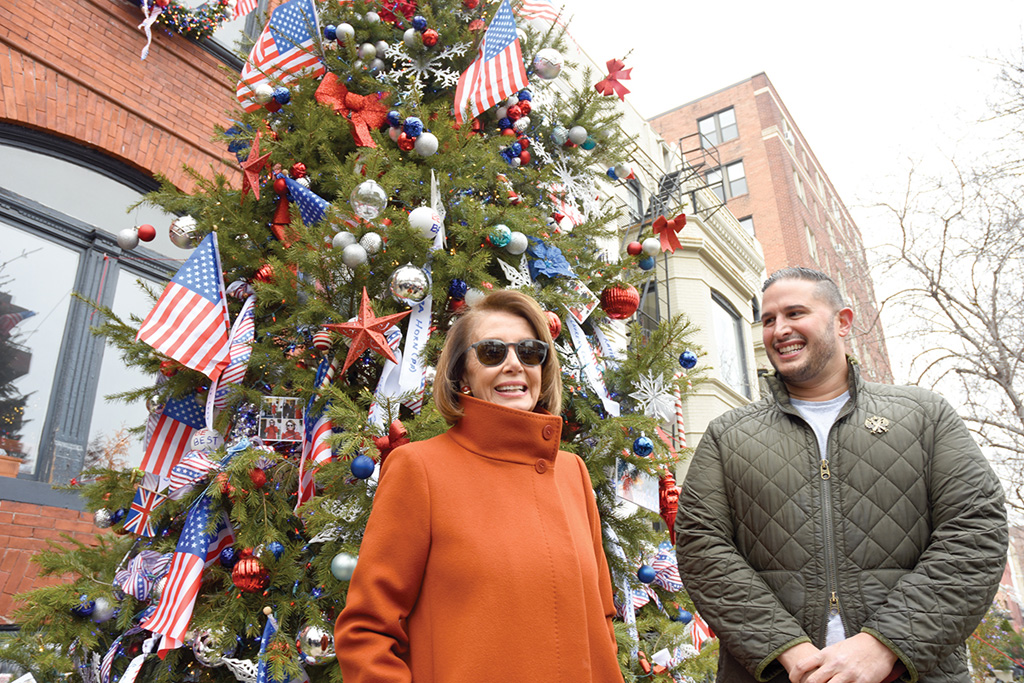 The patriotic fir is festooned with red, white, and blue ribbons bearing the names of every elected woman in Congress, including those starting fresh in January, including Alexandria Ocasio-Cortez and Kyrsten Sinema.

Sevilla and Richard Paules handcrafted poster-board ornaments out of Pelosi’s victorious meme-moment following last week’s public meeting with the President, in which Trump threw a tantrum that would put the most petulant 5-year-old to shame.

He barked that any government shutdown would be his responsibility fully (“I’ll own it!”), giving Pelosi and her Democratic counterpart in the Senate, Chuck Schumer, a huge PR chit. Pelosi triumphantly strode out of the White House in a blazing red coat, grinning broadly, while donning a pair of sunglasses.

Naturally, the congresswoman wore the coat to the tree unveiling, and spoke briefly before a tidy assemblage of reporters and admirers. In real life, the coat is more of an earthen orange. “I got this coat for Obama’s inauguration in 2013,” she remarked, clearly bemused by its sudden iconic status. 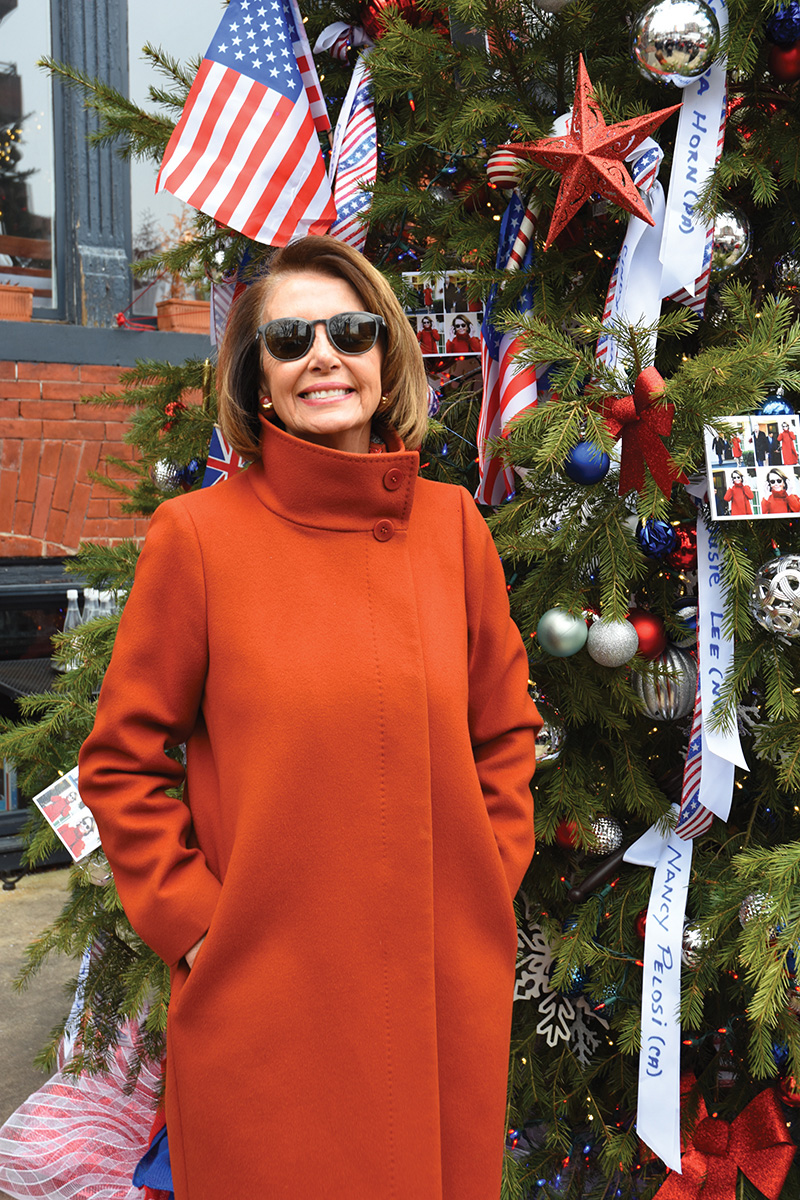 In all her years in Congress, Pelosi has seen “nothing like” the current administration, and the Democratic landslide in the House midterms have made her hopeful for the future. “Let’s deal with [issues] in a way that shows a contrast,” she said of the next two years. “Not only in our views, but in our attitude, and dignity, and tone, and respect for people. So that people will listen to [Democrats] and not just think we’re in a screaming contest with a President of the United States.

“Some of the people that we want to persuade are people who voted for him,” she said, as Chef Daniel Hlusak dispensed carryout bags filled with Floriana’s lasagna, Venison Bolognese, and Scallop & Shrimp Risotto. “They don’t want to be told they made a mistake. So we have to just say, ‘Granted that, but now let’s go into the future in a way that is dignified and respectful, one that is successful at the polls in 2020 as we elect a Democratic House, Senate, and White House.”

Floriana Restaurant is at 1602 17th St. NW in Washington. The Nancy Pelosi Christmas Tree will remain on display at least through Jan. 1, 2019. For reservations, call 202-667-5937 or visit florianarestaurant.com.

Scroll down for more photos! 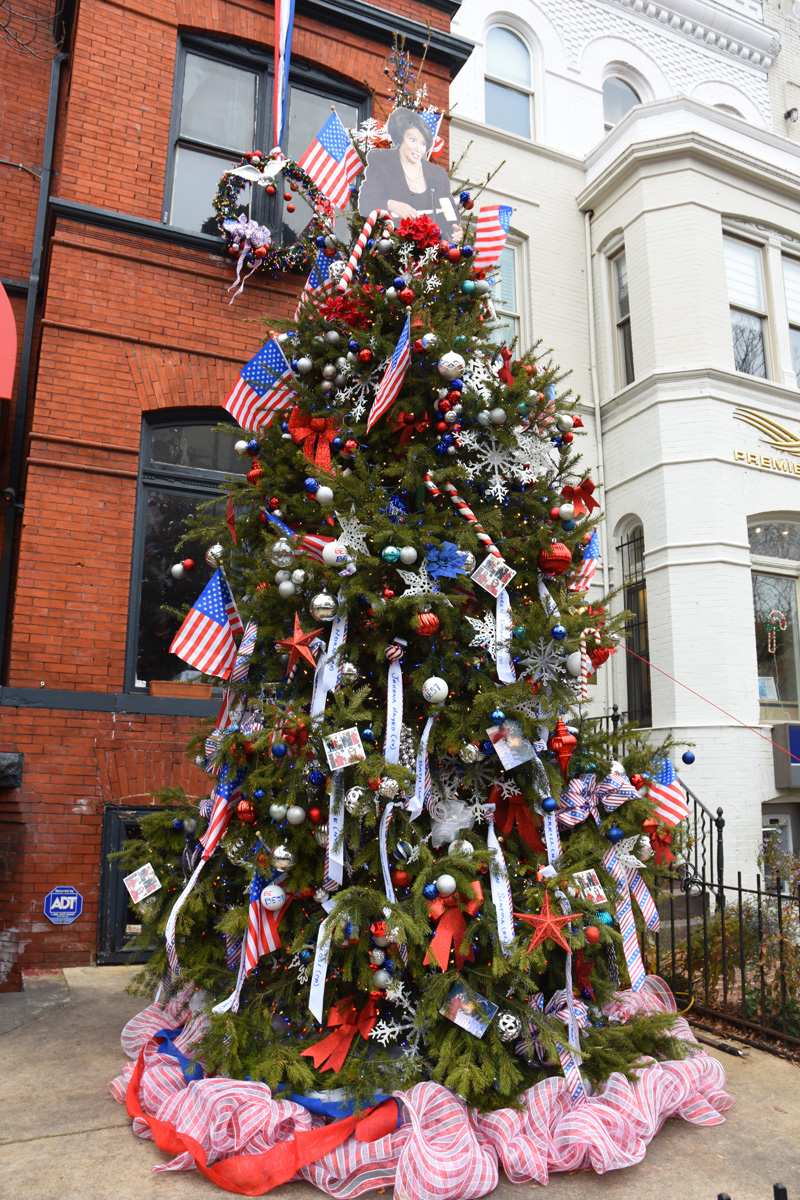 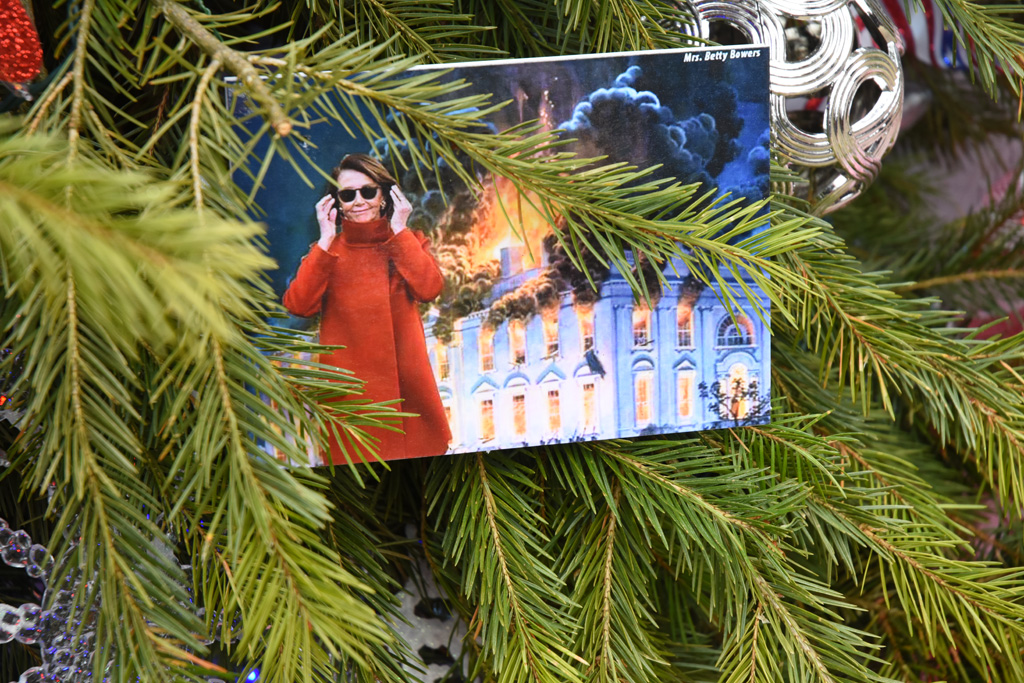 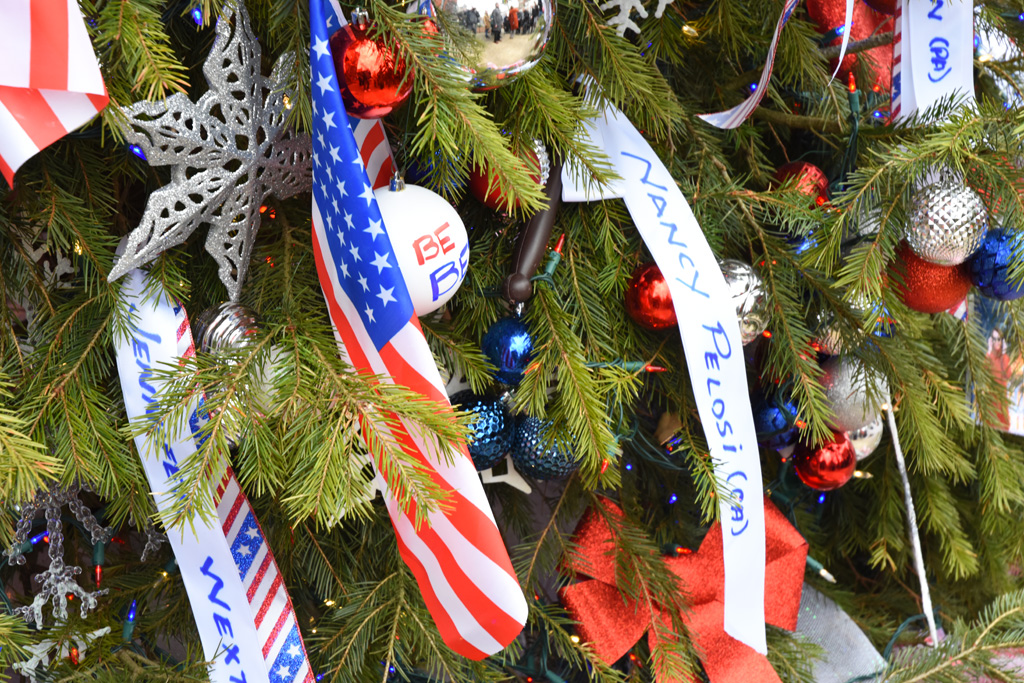 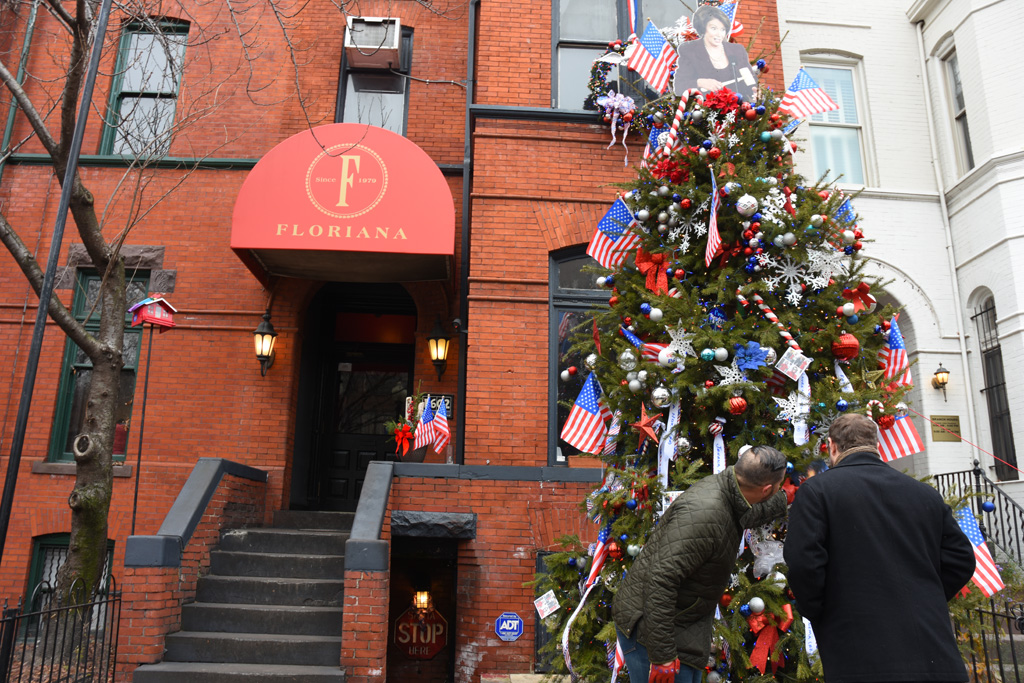 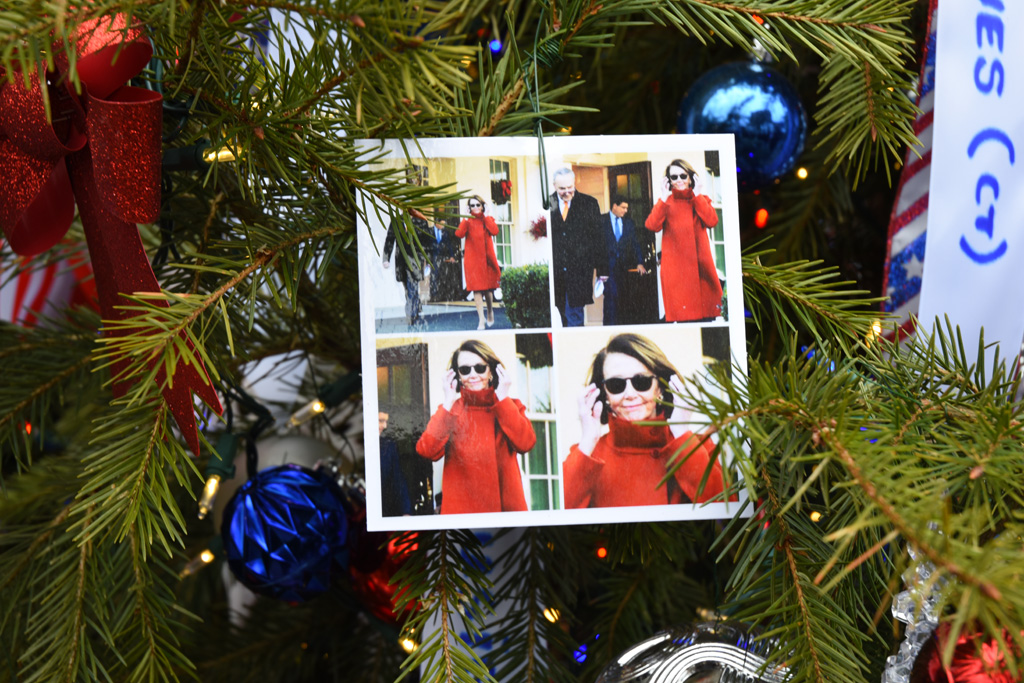 Randy Shulman is Metro Weekly's Publisher and Editor-in-Chief. He can be reached at rshulman@metroweekly.com.
← Previous Story Dignity/Washington offers LGBTQ Catholics the unconditional love many seek from the Church
Next Story → BRUHS invites the D.C. community to celebrate the first day of Kwanzaa