By John Riley on January 10, 2019 @JohnAndresRiley 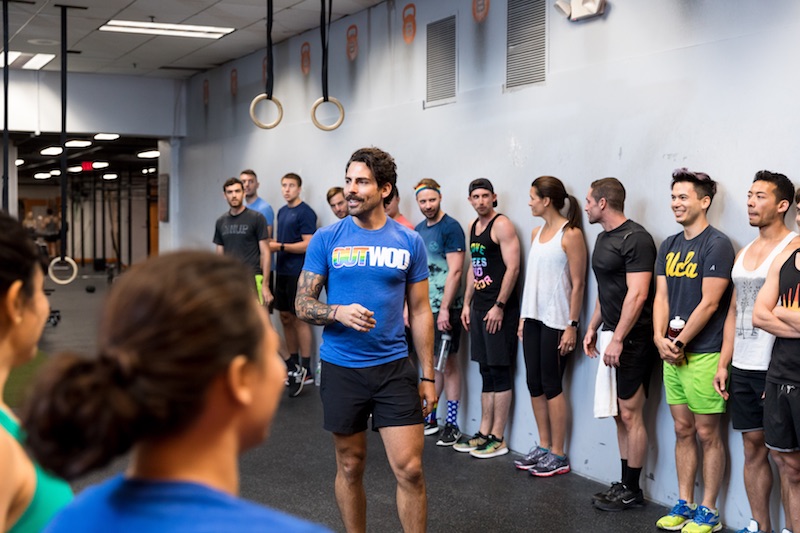 “Historically, the fitness space, and any kind of locker room space, or sports space, has been binary. Always split along male and female. There’s never been an open or non-gendered free-for-all space for folks,” says Will Lanier, the executive director of the OUT Foundation, which advocates for LGBTQ inclusion within the fitness community.

Lanier, who is gay, notes that fitness can be infused with a certain amount of machismo, which has served as  a barrier to LGBTQ inclusion.

For instance, last June, CrossFit fired its chief spokesman, Russell Berger, after he praised an Indianapolis gym for refusing to “celebrate sin” by hosting a Pride-related event. The controversy over Berger’s comments exposed a vein of anti-LGBTQ sentiment that continues to exist, even unconsciously, in pockets of the fitness community.

This can particularly be true for transgender individuals, as evidenced by the case of CrossFitter and OUT Foundation Board Member Chloie Jonsson.

“About four years ago, [Chloie] registered for the CrossFit Games Open as a female,” Lanier notes. “And she contacted CrossFit and said, ‘Hey, I’m transgender. Just so you guys know, I’m signing up as a female.’ And they said, ‘No, you can’t.’ And the reason they gave her was it’s simple biology, which is the worst reply you could give.”

After being told she had to compete in the men’s division, Jonsson filed a $2.5 million lawsuit against CrossFit alleging they had discriminated against her and refused to acknowledge the fact that she had transitioned a decade earlier. CrossFit eventually settled the lawsuit, and announced last August that transgender athletes would be able to compete according to their gender identity.

In the wake of Jonsson’s lawsuit, Lanier says the OUT Foundation took on her cause as their own, not only advocating for a change to the CrossFit Games’ policy, but seeking to promote transgender inclusion in individual gyms across the nation.

The resulting tour, named “Don’t Be an A**hole” — a name derived from an inside joke among OUT Foundation staff — will travel to 12 different cities over a span of six weeks, beginning in New York on Friday, Jan. 11. The tour will then move to Washington, D.C. on Jan. 12, and then on to New Orleans, Miami, Denver, Salt Lake City, Austin, Nashville, Seattle, Durham, N.C., and Atlanta, before ending in San Francisco on Feb. 17.

As part of the tour, the OUT Foundation will send five speakers to various gyms to share their personal stories and answer questions about how gyms can make themselves and their fitness programs, like CrossFit, more inclusive for transgender individuals.

The panel members include Lanier; Alyssa Royse, a cisgender ally who owns and runs Rocket CrossFit, a non-gendered fitness facility in Seattle; OUT board members and transgender athletes Jonsson and Bennett Kaspar; and Dylan King, a transgender athlete and gym owner.

“They’re all bringing something to the table that I think is going to be really enlightening to people who come to this tour,” Lanier says of his tour companions. “And I really hope that people leave not only feeling more educated, but also that they can be a better ally, not just at the gym, but also anywhere that there’s a binary space. Because that’s kind of our goal. The more educated people are, the more exposed people are to something that they might not have regular interaction with, the more accepting they are.” 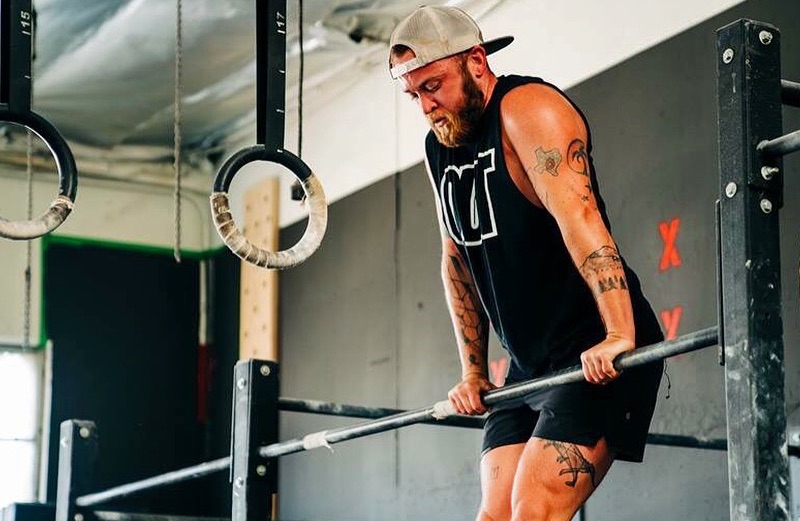 As a transgender CrossFitter and yogi, Kaspar says he’s never experienced outright or blatant discrimination at his home “box,” or gym, in Los Angeles, even during his transition. But he notes that even some of the colloquial jargon used by his fellow CrossFitters can be exclusionary.

“My gym is a very queer gym. We have a lot of LGB members and so it was always a comfortable place for me,” he says. “But there are things about CrossFit that remain unchallenged in my gym, that when I workout there, I confront every single time. When I do weightlifting, Olympic lifting, I use the 35-pound bar, because I don’t have very large hands. I also don’t have very large wrists. And so if I’m going to lift heavy, I need to be able to use my grips. I have to use the skinnier bar. And in my gym, it’s still called the ladies’ bar.

“When I do workouts, I oftentimes will do what is labeled the women’s RX workout because that’s where I’m at with my fitness right now. And I still have to say ‘ladies RX’ when I report out my score,” Kaspar continues. “Those things don’t consciously weigh on me, but they were examples that immediately came to mind.”

Besides sharing insights from his own personal experiences, Kaspar, an attorney by trade, hopes to use his platform from the “Don’t Be an A**hole” tour provide some legal and financial arguments to business owners on why it behooves them to be more trans-inclusive.

But he notes that, when he talks about inclusion, he’s rarely met with outright hostility from gym-goers or gym owners. Rather, they question why they need to be broaching the topic in the first place.

“The question that comes up the most is ‘why does it matter?’ and and that’s a question that has to be answered in person,” says Kaspar. “You can try to explain to people in black-and-white by telling stories about why it matters, but I think for people who have never had a personal experience with a trans person, meeting us is what fills in the answer to that question.” 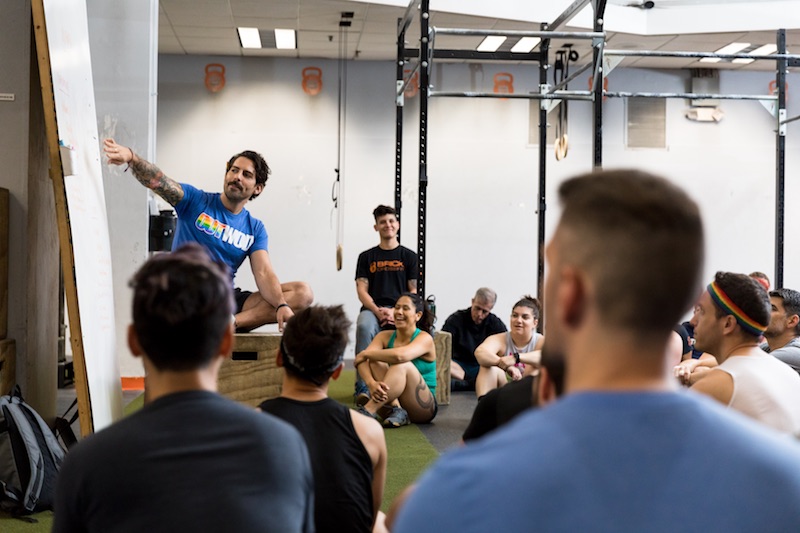 Participants listen to an instructor explaining the Workout of the Day – Photo: OUT Foundation.

Lanier acknowledges that some business owners who aren’t as well-versed in transgender issues may be reticent to alienate some cisgender clientele, especially if courts are sympathetic to enforcing traditional gender norms — as recently happened when a Michigan court restored a lawsuit brought by a cisgender woman against Planet Fitness after she discovered the gym allowed transgender women to use the female locker room.

“That’s going to be our battle, that’s going to be our uphill fight,” says Lanier. “A lot of times we can’t battle the law, like the non-discrimination law. We can’t change that…. I think it’s more about changing minds. These bigger companies like Planet Fitness, who are, as a corporate entity, probably less inclined to listen, because they listen with legal action, not so much with their hearts.

“I think our goal is to touch the smaller businesses, who need to be inclusive in order to be successful, and ensure will have the tools to do that. Planet Fitness, for instance, doesn’t need the four trans members that would join their gym. But mom-and-pop gym down the street might. Four members would make or break them.”

As the co-owner of Seattle’s Rocket CrossFit, Royse agrees that it is sometimes easier for smaller, non-chain gyms to take steps to be more inclusive and less obsessed with gender, noting that she is explicit on her website about her commitment to inclusion.

“My husband and I both have gay parents, so we’ve both grown up, one way or another, aware of the the struggles of being accepted,” she says. “It’s obviously better now than it was when we were young. But it’s very much in my husband’s and my DNA to fight for equality for all people.”

Like her fellow tour members, Royse does not sugar-coat what she sees as flaws within the fitness industry, particularly the reliance on stereotypes and what she calls gender-essentialism, where expectations are determined by one’s gender and not their personal fitness level or the effort they invest in getting into shape. 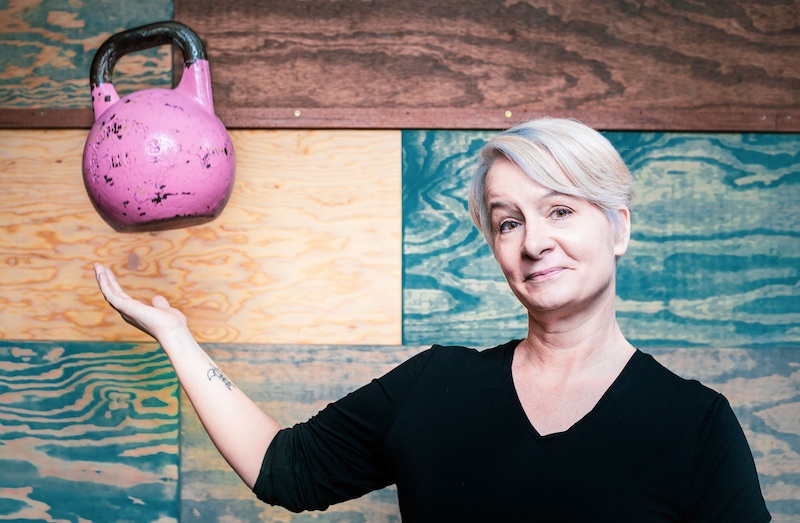 Because of her personal commitment to inclusion, Royse’s gym has attracted a large queer population, which, in turn, has informed Rocket CrossFit’s evolution over the years.

“I’ve worked in the fitness industry for years. I was an aerobics instructor in the days of puffy Reebok high tops in all colors,” she jokes. “Our gym at Rocket has been through many iterations, but it became clear to us early on that equity for all was a core value of our gym. So we don’t use gender pronouns in our gym. We no longer have leader boards that separate people into gender. … Slowly, we’ve garnered a lot of attention for being a space that’s safe for anybody.”

Royse hopes to share the story of that evolution in the hope of serving as an example to other fair-minded gym owners.

“I think most people don’t want to be assholes. I think most people don’t believe the gender essentialism we’ve been fed from the time we were kids, and use it more out of habit than out of malice,” she says. “If we can help reach more people and see the role that gender doesn’t play, or doesn’t have to play, in fitness, and figure out how to create inclusive communities, I think people are inclined to do that. They just don’t know how.

“My role, through the tour, is to literally hold their hands and show them, step by step, this is how you do it,” Royse adds. “I think most people just need a roadmap.”

The OUT Foundation’s “Don’t Be an A**hole” Transgender Education Tour will come to Washington, D.C. on Saturday, Jan. 12 from 2:30 to 4 p.m. at CrossFit Hierarchy, 1681 Kalorama Rd. NW. For more information, visit iamout.org.

John Riley is the local news reporter for Metro Weekly. He can be reached at jriley@metroweekly.com
← Previous Story Stonewall Yoga offers LGBTQ people a safe, fun space to learn yoga
Next Story → New HIV therapy ‘kicks’ virus out of hiding and ‘kills’ it