By John Riley on January 7, 2019 @JohnAndresRiley 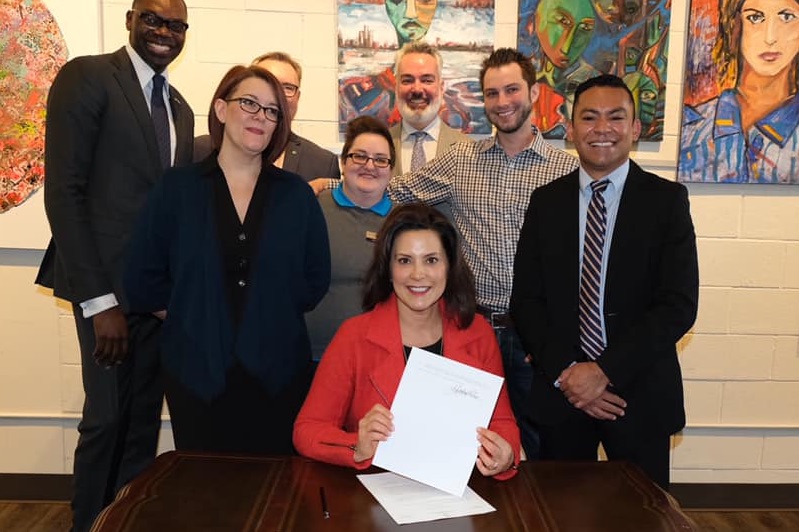 The order, signed Monday morning, protects employees of the executive branch and state contractors based on their sexual orientation, gender identity, and gender expression. It also prevents employees of state agencies from discriminating against LGBTQ state residents who wish to access certain programs or services for which they qualify.

But Snyder’s order included an exemption for churches and religious organizations that could potentially allow them to discriminate against employees who do not act in a religious capacity, such as a person who works on behalf of an organization seeking a contract with the state. Whitmer’s does not contain that same exemption.

“If we’re going to attract the talented workforce our businesses need to create jobs and grow our economy, then we’ve got to get on the right side of history,” Whitmer said in a statement. “That’s what this executive directive is all about.”

Whitmer, who has long supported LGBTQ rights as a member of the state legislature, was endorsed by the Human Rights Campaign last fall because of her promise to sign such an order into law, and her support of a bill to permanently codify those protections — as well as protections for housing and public accommodations — into the state’s civil rights law. Michigan is one of 31 states lacking a comprehensive LGBTQ nondiscrimination law.

David Maluchnik, a spokesman for the Michigan Catholic Conference, told the Detroit Free Press that the group wants to look more closely at Whitmer’s executive order before commenting, though he expressed disappointment at the fact that the order is one of Whitmer’s first actions as governor.

“We were looking forward to the governor coming out of the gate on issues related to poverty, clean water or criminal justice reform,” he said.

“This action is deeply personal to me and I am grateful that Governor Whitmer has made anti-discrimination one of her top priorities in her first several days in office,” Michigan Attorney General Dana Nessel, an out lesbian, said in a statement. “This is a step in the right direction and I am hopeful that soon our state laws will also reflect the paradigm of equal protection under the law for all Michiganders.”

“Governor Whitmer’s executive order provides important protections for LGBTQ Michiganders and their families,” Masen Davis, the CEO of Freedom for All Americans, said in a statement. “This action brings Michigan one step closer to being a state where all LGBTQ people are treated fairly and equally under the law. All Americans deserve to know they’ll be treated with dignity and respect in their jobs, their homes, and their communities.”