Whitman-Walker is splitting into five connected entities, to better deliver its services and to secure its long-term future.

By John Riley on January 10, 2019 @JohnAndresRiley 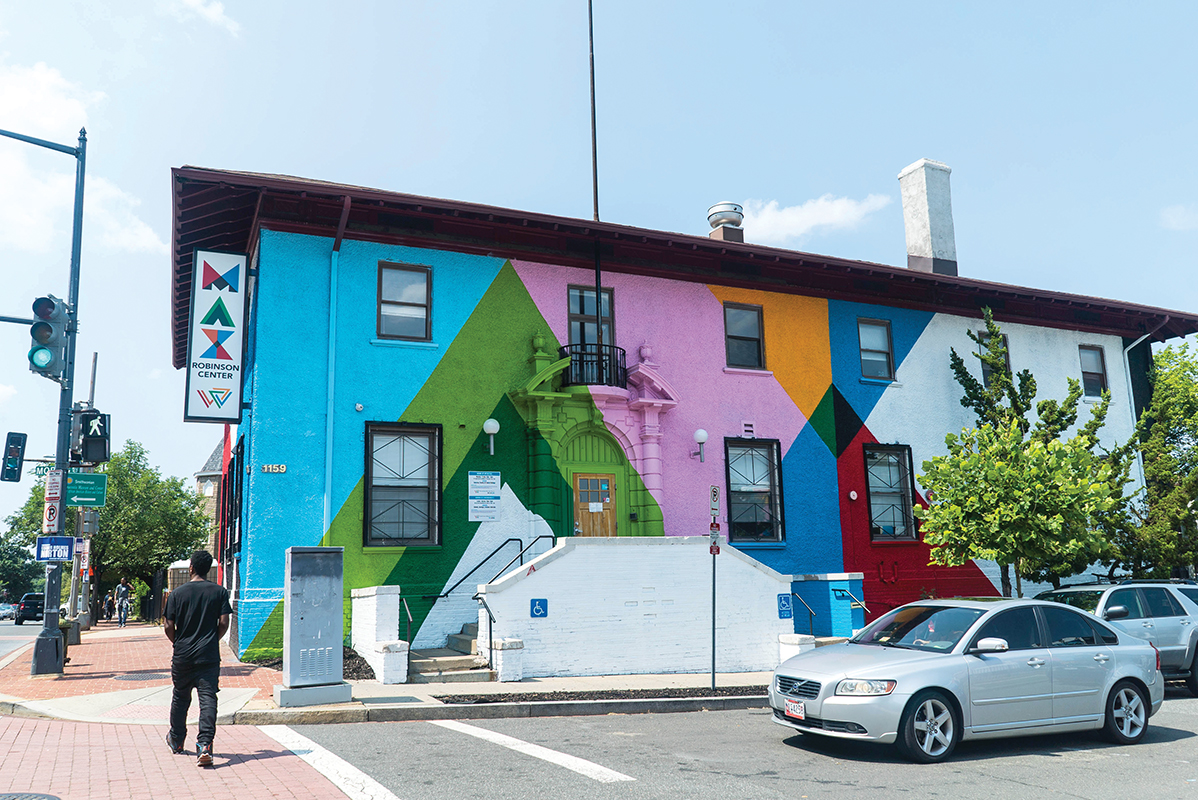 Whitman-Walker Health is undergoing a massive reorganization. The venerable healthcare provider, a mainstay of D.C.’s LGBTQ community for 41 years, wants to better focus on fundraising, research and education, and long-term sustainability.

“After the move to 1525 14th Street, there was a frustration of the board that we didn’t have enough time to get to research and policy and education,” says Harry Fox, chair of the board of the newly created Whitman-Walker Health System. “We weren’t able to raise enough money because we didn’t have time as a board to focus on that. And it began to be clear that the structure that got us here didn’t work.”

That structure, which contains numerous requirements that Whitman-Walker must meet as a federally-qualified health center, all came under the banner of Whitman-Walker Health. Which meant other aspects of running and maintaining a vibrant health system were overshadowed by patient services and direct health care.

Under the reorganization, the Whitman Walker Health Center will continue to provide direct patient services, including culturally competent primary health care, HIV and STD testing, legal services, and insurance assistance to patients. The Health Center will also oversee the Hearth Foundation, an organization with its own board of directors that provides housing services to individuals at risk of homelessness.

A newly established sibling company, the Whitman-Walker Health System, will be created to address the other facets of running a successful health organization, with an eye toward long-term sustainability. In charge will be CEO Don Blanchon, who will report to a separate board of directors.

“In reading about this, it might seem to people is that Whitman-Walker is splitting into five different pieces, but it’s all in the service of being able to deliver the best quality care we can,” says Sandy James, board chair of the Whitman-Walker Health Center. “These are sibling organizations, working together toward similar goals. We have different missions and carry out different work, but it’s all towards the same end.” 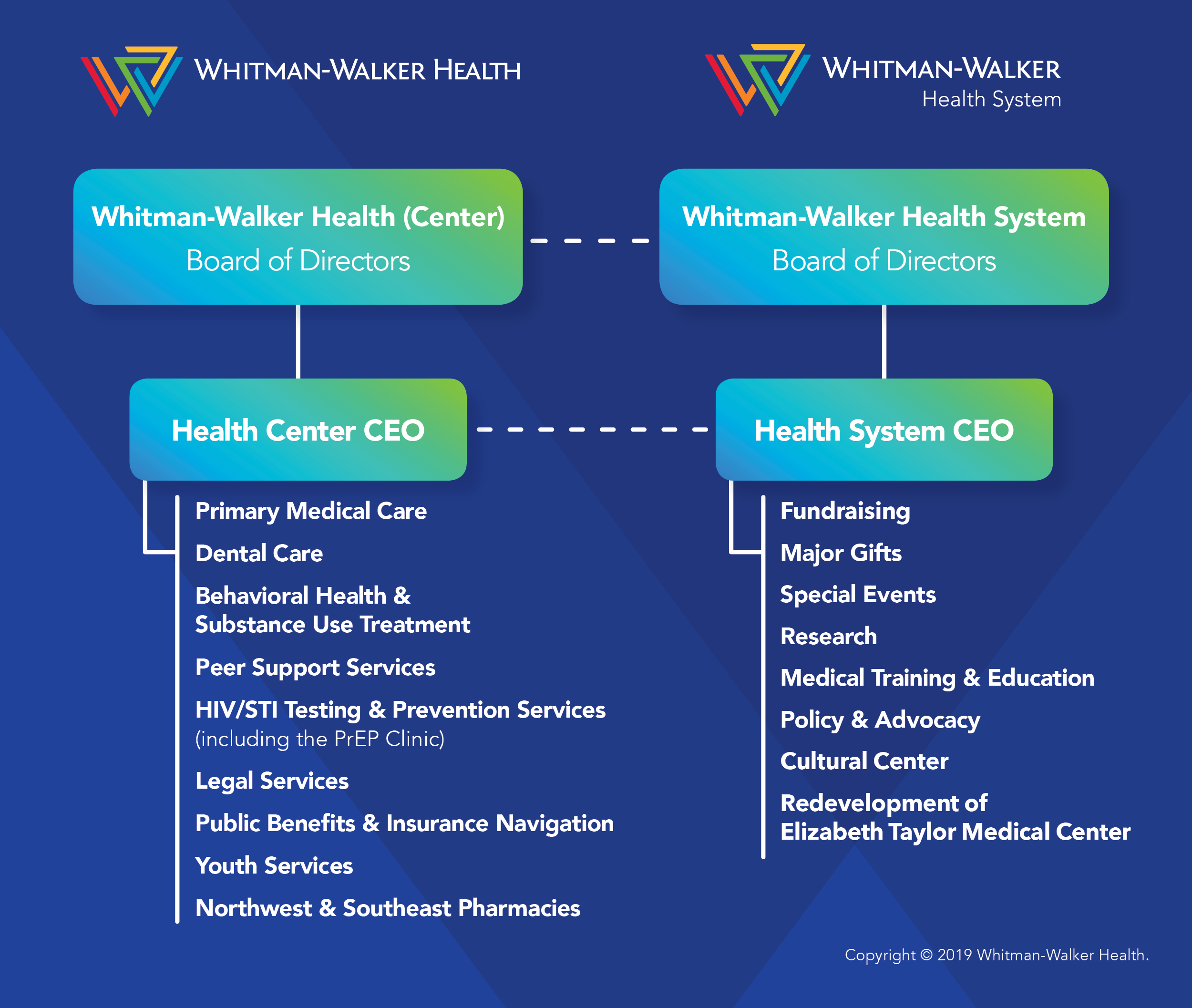 Another part of the restructuring involves the expansion of Health Center services east of the Anacostia River, with the aim of eventually migrating services over the next decade from the current Max Robinson site, at 2301 Martin Luther King, Jr. Ave. SE, to a new, larger building. That building would be equal in size to the Health Center’s 1525 building in the Logan Circle neighborhood, part of a recent expansion and redevelopment of Whitman-Walker’s Northwest D.C. facilities.

“We’ve had a presence in Anacostia for quite some time,” says James. “But we know that we don’t have the same services over there and we want to at least be able to have the same sorts of services that we have that we’re able to offer on 14th Street at Max Robinson. The new building will allow us to do that.”

Sometime in 2020 or 2021, that new Anacostia-based building would house expanded youth programming, primary and urgent care, and behavioral health services for people in Wards 7 and 8.

“It’s best to think about the three projects — 1525, Elizabeth Taylor, and then what we plan to do in Anacostia — as one 10-year initiative,” Blanchon says. “The idea was that we could unlock the value of Elizabeth Taylor [through renting out parts of the property] by redeveloping that, and generating a financially sustainable income stream that also provides us some ability to access capital to either rebuild Max Robinson Center, or expand Max Robinson Center and put in a new facility east of the river. So they’re really different phases of the same project.”

Naturally, any expansion requires significant capital investment. The new Anacostia campus is expected to cost up to $20 million to complete, meaning the Whitman-Walker Foundation, as the philanthropic arm of the Health System, has set an ambitious goal of raising a minimum of $5 million in 2019.

“I remind people all the time that fundraising is the place where we have discretionary dollars that come in, that allow us to do new or expanded programs that serve the trans community, or LGBTQ seniors,” says Blanchon. “We could go through a list of programming, but the reality of it is, for us to realize those dreams, we’re going to have to figure out a way to inject more money into the organization.”

Blanchon notes that the passage of the Affordable Care Act has, in some people’s minds, lessened the urgency of fundraising for HIV-related research or primary care. That then forces Whitman-Walker to prioritize what it raises by funneling it into direct patient services, which, in turn, takes away money that could be earmarked for more ambitious future projects the health system wishes to undertake.

“If we think about the last 10 years, we’ve had relatively flat fundraising. Government funding has kind of bounced around,” notes Blanchon. “We’ve always had great community support. Our average gift is somewhere around $100. We have close to 20,000 donors through all of the events and activity we do here. And it’s amazing.

“What’s missing for us is really this major donor component. We’ll still need government, but we’ll need a bigger increase from corporations, foundations and major donors, which is a place where we rightly still need to put some more time,” he adds. “And, depending on the outcome of those efforts, we’ll be able to provide more service to the community. The more we can generate from this model, the more we’re able to tackle some of the issues that exist.”

From her perspective as head of the Health Center (sometimes referred to as “the clinic”), Shafi sees benefits in the restructuring that will enable her to focus on the quality of care offered at Whitman-Walker’s sites, particularly east of the river.

Besides the expansion of services for youth and seniors, and the continuation of Max Robinson’s medically-assisted treatment program for those suffering from addiction, Shafi also sees opportunities for expanded HIV and STI testing and greater promotion of PrEP as a tool to reduce the risk of HIV transmission. Shafi hopes to be able to reach out to and engage communities where PrEP has historically not been marketed.

“We’re trying to expand the way we communicate about PrEP,” she says. “We’re going to have a major push this year. We have a PrEP clinic that runs out of the 1525 Health Center. We’re also going to be building one at the Max Robinson Center, now that the pharmacy is open.”

Shafi says that while current health care services won’t be drawn back under the restructuring she would eventually like to see patients feel the tangible benefits that will come from increased investment.

Reflecting on his 13 years with Whitman-Walker, Blanchon is excited about the new chapter and the changes taking place within the organization that will ultimately be for the better.

“I couldn’t think of a better person to work side-by-side with than Naseema on the health center side,” he says. “We have an amazing supportive board who understands that to be really impactful on the lives of the people we serve, we have to stay relevant and responsive, and we have to do things differently sometimes.”

Blanchon also emphasizes that continued support from the greater D.C. community will be as important as it was in Whitman-Walker’s earliest days, not only in terms of financial support, but in constructive feedback that allows Whitman-Walker to improve all of its services.

“This organization has never been able to do it all on its own,” he says. “It has always needed community, and once again we will need their support going forward.”