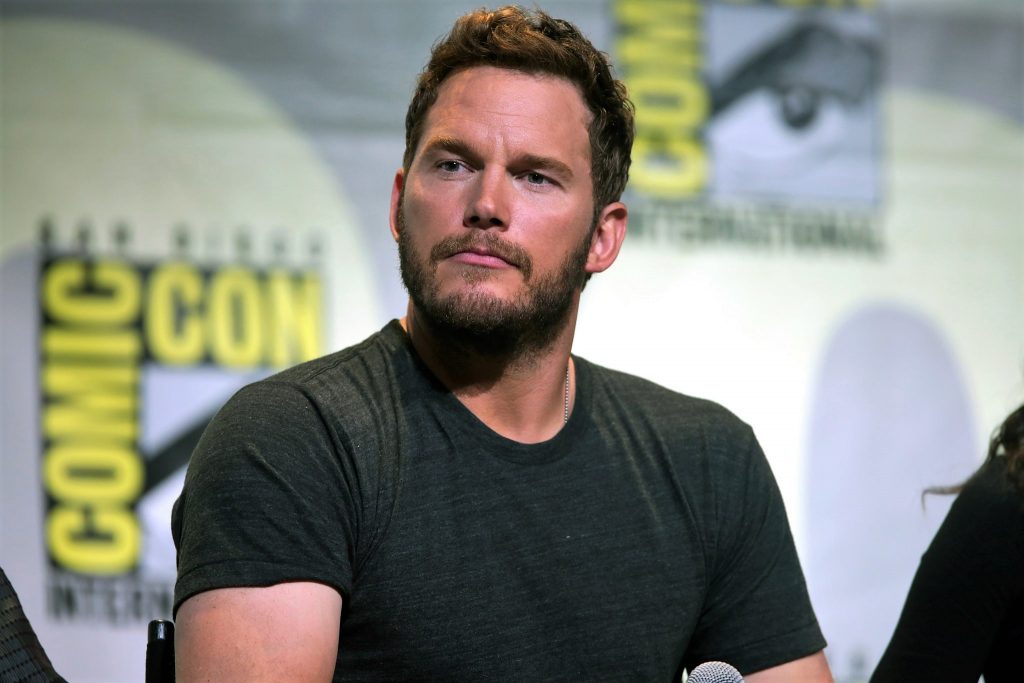 Chris Pratt has defended his church after Ellen Page called it “infamously anti-LGBTQ.”

Controversy erupted around Zoe Church in Los Angeles after Page, who is lesbian, pointed out its connections to anti-LGBTQ Pentecostal congregation Hillsong Church last week.

Following Pratt’s appearance on The Late Show with Stephen Colbert on Feb. 7, where the Jurassic World and Lego Movie actor discussed his spirituality, Page retweeted a Hollywood Reporter article about the episode, adding, “Oh. K. Um. But his church is infamously anti lgbtq so maybe address that too?”

According to the New York Times, Zoe’s pastor Chad Veach “modeled his church after Hillsong,” which was founded by anti-gay pastor Brian Houston in Australia.

Houston released a statement in 2015 saying that he “holds to traditional Christian thought on gay lifestyles and gay marriage,” and “‘God’s word is clear that marriage is between a man and a woman.”

Houston added: “Hillsong Church welcomes ALL people but does not affirm all lifestyles. Put clearly, we do not affirm a gay lifestyle and because of this we do not knowingly have actively gay people in positions of leadership, either paid or unpaid.”

And in a 2015 GQ profile, Hillsong pastor Carl Lentz said “everyone should feel welcome at Hillsong,” but that if someone “[makes] a decision to live as gay men, they are going to get married, our stance in this church is there’s going to be a limited involvement when it comes to leadership, because you don’t believe what I believe.”

The Daily Beast also reported in 2016 that Hillsong previously referred LGBTQ congregants to conversion therapy, and that coming out to a pastor “landed a church member in just such an ‘ex-gay’ program.” However, it has reportedly since disavowed the practice.

Zoe Church also purports to be a place “where our doors are open to people of all backgrounds — regardless of where they are at in their journeys — and we hope all feel welcomed, comfortable and loved.”

And it was a sentiment Pratt echoed in an Instagram story on Monday, Feb. 11, responding to — but not directly naming — Page.

“It has recently been suggested that I belong to a church which ‘hates a certain group of people’ and is ‘infamously anti-LGBTQ,’” Pratt wrote. “Nothing could be further from the truth. I go to a church the opens their doors to absolutely everyone.”

Pratt then noted that Zoe Church had rallied around him during his divorce from Mom star Anna Faris, citing it as proof that the church supports congregants despite what the Bible may say.

“Despite what the Bible says about divorce my church community was there for me every step of the way, never judging, just gracefully accompanying me on my walk,” Pratt, who is now engaged to Katherine Schwarzenegger, wrote. “They helped me tremendously offering love and support. It is what I have seen them do for others on countless occasions regardless of sexual orientation, race or gender.”

Pratt added that while his faith is important to him, “no church defines my life…. My values define who I am.”

He continued: “We need less hate in this world, not more. I am a man who believes that everyone is entitled to love who they want free from the judgment of their fellow man.” 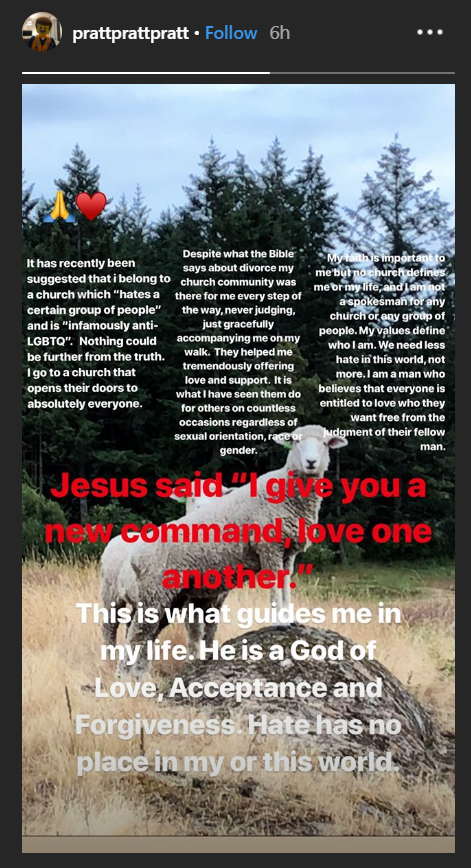 Page issued a couple of follow-up tweets prior to Pratt’s response, targeting actors who belong to anti-LGBTQ organizations or churches — including retweeting Leah Remini, who responded to Page by calling out a number of famous actors who follow Scientology.

“If you are a famous actor and you belong to an organization that hates a certain group of people, don’t be surprised if someone simply wonders why it’s not addressed,” Page tweeted. “Being anti LGBTQ is wrong, there aren’t two sides. The damage it causes is severe. Full stop. Sending love to all.”

Page added: “If lgbtq+ people are expressing their pain, their trauma, their experiences…maybe just try and listen? Open your heart, stop being defensive and have compassion. It’s a beautiful and life changing feeling, empathy. Much love truly to all.”