By John Riley on February 14, 2019 @JohnAndresRiley 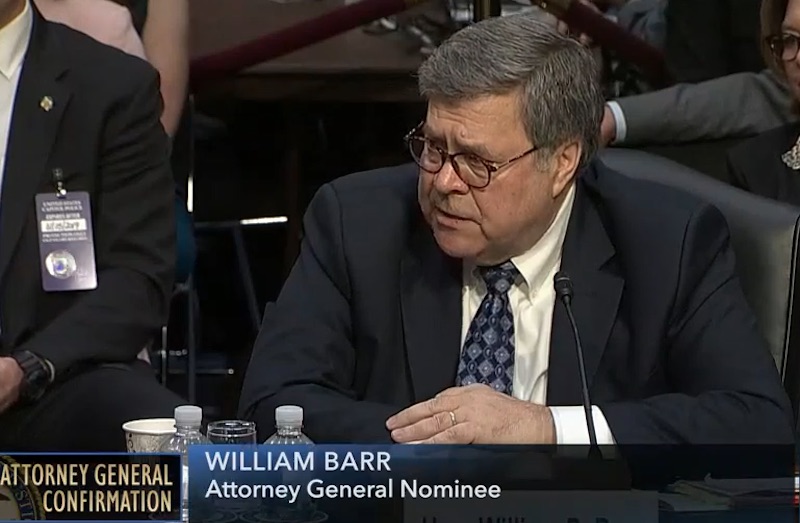 On Thursday, the U.S. Senate voted 54-45, largely along party lines, to confirm William Barr as the next Attorney General of the United States.

Two Democrats, Joe Manchin of West Virginia and Kyrsten Sinema of Arizona, voted with Republicans to confirm Barr. One Republican, Richard Burr of North Carolina, did not vote.

Barr, who previously served as U.S. Attorney General for two years under former President George H.W. Bush, brought with him a long record of legal and policy positions that drew scrutiny, and, in some cases, sparked criticism, from Democrats.

Perhaps the most egregious policy promoted by Barr during his stint as Attorney General was the creation of an “HIV prison camp” at Guantanamo Bay Naval Base for 310 Haitian asylum seekers, including children, who were HIV-positive, in an effort to prevent the spread of the disease by separating them from fellow asylum seekers who were fleeing Haiti at a time of political turmoil in the country.

According to the Daily Beast, the HIV prison camp, Camp Bulkely, garnered criticism for its substandard living conditions, where inmates were forced to live in cramped quarters, eat maggot-ridden food, and often did not receive adequate medical care — which in turn, exacerbated their HIV and any pre-existing health conditions they had. Some Democrats claim that the indefinite detention of refugees set a precedent for future administrations to promote similar detention policies for asylum-seekers.

Barr has also been criticized for his views on HIV/AIDS, often opposing public health intervention strategies aimed at reducing the incidence of HIV, such as condom distribution. He also has blamed the disease on “sexual licentiousness” and attributed its spread to people’s “personal misconduct,” and was one of the key figures who pushed to maintain a ban on allowing people living with HIV to enter the United States.

LGBTQ groups, and some pro-LGBTQ civil rights organizations, also voiced objections to Barr over his vocal support of actions taken by his predecessor Jeff Sessions, to push for religious exemptions that would weaken legal protections for LGBTQ people, particularly transgender individuals. Some progressive groups also balked at comments he made condemning efforts to keep religiously-motivated beliefs from being promulgated in public schools.

But Barr has not been shy in expressing his animus toward the modern-day LGBTQ rights movement. In the 1990s, he delivered multiple speeches condemning the “permissiveness,” “sexual revolution,” and “moral upheaval” that he claims has led to America’s decline. He criticized a D.C. law that required Georgetown University to recognize an on-campus LGBTQ group as an attack on morality.

Barr also bemoaned the dwindling power of the Catholic Church’s influence, comparing it to the attention often bestowed upon the LGBTQ community, writing: “It is no accident that the homosexual movement, at one or two percent of the population, gets treated with such solicitude while the Catholic population, which is over a quarter of the country, is given the back of the hand. How has that come to be?”

“There’s little doubt that William Barr will carry on this Administration’s ongoing efforts at rolling back the progress LGBTQ Americans have made in recent years,” Ellis said. “This confirmation today reminds us once again that the Trump Administration is no friend to us.”

Sharon McGowan, legal director and chief strategy officer for Lambda Legal, said that it will be up to Barr to prove he is capable of using his position to defend the civil rights of “all people, not just the wealthy and the powerful.”