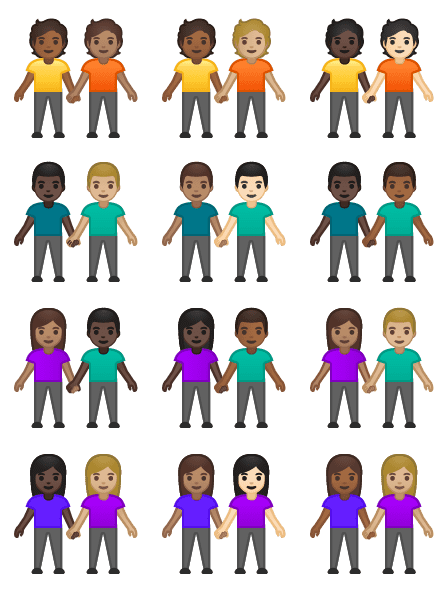 Interracial same-sex couple emojis will soon be appearing on your phone, thanks to a newly released set of emoji standards.

The Unicode Consortium, which manages and publishes the standard upon which all emoji are based, has released its v12.0 emoji characters, which include more options for couple emojis, allowing user-selectable skin tones for both same-sex and opposite-sex couples.

“The people holding hands emoji now have four combinations of gender and all the various combinations of skin tones, for a total of 71 new variants,” Unicode Consortium wrote on its blog. In total, there are now 230 emoji including variants for gender and skin tone.

The latest emoji release also includes a deaf person emoji, a blind person walking with a cane, and emojis for people in motorized and non-motorized wheelchairs.

Other new emoji include an otter, an ice cube, a ringed planet, and a waffle emoji, among numerous others.

Dating app Tinder had previously launched a petition on Change.org to push for more diverse couple emojis, writing at the time: “While emojis for people of color and same-sex couples both became a reality in 2015, one group of people is still excluded from emoji representation: interracial couples. Isn’t time all love was represented?”

In a statement, Jenny Campbell, CMO of Tinder, said she “couldn’t be more proud” of the new emojis.

“Tinder advocates for the freedom of people to live how they want to live and love who they want to love,” Campbell said. “The success of our Interracial Couple Emoji campaign shows how powerful the voices are of the more than 50,000 people who joined our cause by signing our petition; together, we effected change and ensured visual representation for interracial couples around the world. I couldn’t be more proud of this incredibly positive outcome.”

The new emojis should start making their way to Android and iOS, as well as Windows, macOS, and social media platforms, later this year. (Windows users in Microsoft’s Insider Preview program should already have them, thanks to an update a few days ago.)

Rhuaridh Marr is Metro Weekly's online editor. He can be reached at rmarr@metroweekly.com.
← Previous Story Robin Roberts on her Jussie Smollett interview: “It was a no-win situation for me”
Next Story → 5 reasons why LGBTQ advocates are alarmed by Trump’s judicial nominee Neomi Rao