Home / News + Politics / Nation / Robin Roberts on her Jussie Smollett interview: “It was a no-win situation for me”

Robin Roberts on her Jussie Smollett interview: “It was a no-win situation for me” 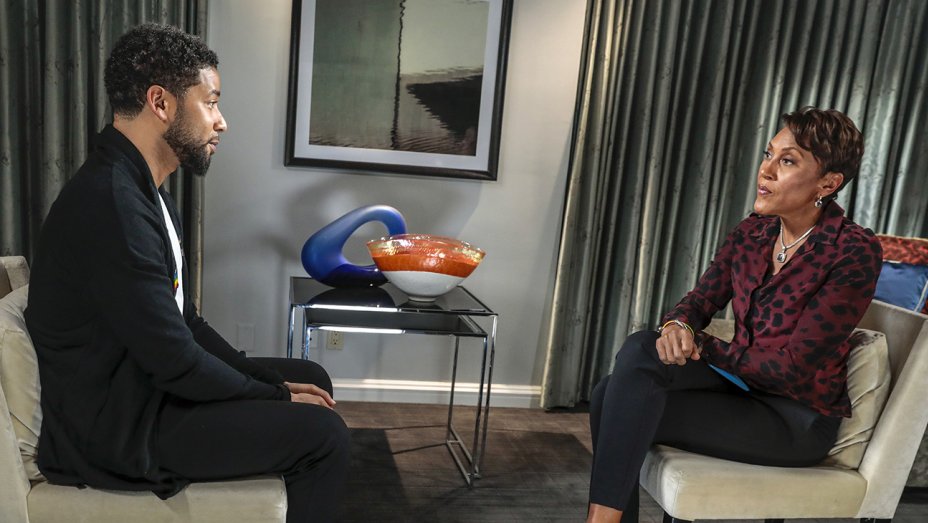 Good Morning America host Robin Roberts has discussed her interview with Empire star Jussie Smollett, calling it a “no-win situation” for her.

Smollett currently faces accusations of falsifying an alleged hate crime in which he told Chicago police he was attacked by two white men who yelled, “This is MAGA country, made homophobic comments, tied a rope around his neck, and threw bleach over him.

Roberts interviewed Smollett on February 14, one week before the actor was formally charged with disorderly conduct and accused of staging the attack.

During the interview, Smollett teared up when asked about the attack and chastised “doubters” who were questioning his story.

“I have to acknowledge the lies, and the hate,” Smollett told Roberts. “And it feels like if I had said it was a Muslim, or a Mexican, or someone black, I feel like the doubters would have supported me much more. A lot more. And that says a lot about the place that we are in our country right now.”

He added: “It’s not necessarily that you don’t believe that this is the truth, you don’t even want to see the truth.”

Speaking at The Cut‘s “How I Get It Done” event in Brooklyn on Monday, Roberts was asked if she felt she should have been more aggressive in her questioning of Smollett.

“I’m a black gay woman, he’s a black gay man,” she said, according to Page Six. “He’s saying that there’s a hate crime, so if I’m too hard, then my LGBT community is going to say, ‘You don’t believe a brother.’ If I’m too light on him, it’s like, ‘Oh, because you are in the community, you’re giving him a pass.'”

Roberts said it was “a no-win situation for me.”

“I pride myself in being fair,” she continued. “I know how much work went into being balanced about what had happened and to challenge him on certain things.”

Elaborating further, Roberts revealed that she wasn’t sure whether to do the interview or not.

“I said, ‘I don’t want to sit down with him if he’s going to lawyer up,’ and then I was told, ‘He wants to speak with you,’ [because] he was outraged by people making assumptions about whether it had happened or not,” she said, adding, “They said, ‘He wants to say things that he has not said’ and I’m like, ‘As a journalist, as a newsperson, this is newsworthy, he’s going to go on record for the first time, yes I’ll do the interview.’”

Roberts’ interview with Smollett aired after Chicago police sources had started suggesting that Smollett may have fabricated the attack, but Roberts was quick to point out that she couldn’t have known that at the time in order to ask Smollett about it.

“People are looking at the interview through the eyes of ‘How did you not know?’” she said. “I did the interview 48 hours before then. Had I had that information or what the brothers were alleging, heck yeah, I would have asked him about that.”

Smollett continues to deny accusations that he staged the attack, issuing a statement through his lawyers blasting the Chicago Police Department’s handling of the investigation and calling the allegations against him “an organized law enforcement spectacle that has no place in the American legal system.”

“The presumption of innocence, a bedrock in the search for justice, was trampled upon at the expense of Mr. Smollett and notably, on the eve of a mayoral election,” his legal team said in a statement. “Mr. Smollett is a young man of impeccable character and integrity who fiercely and solemnly maintains his innocence and feels betrayed by a system that apparently wants to skip due process and proceed directly to sentencing.”

In light of the situation, Smollett was suspended from Fox drama Empire, with producers confirming he wouldn’t appear in the final two episodes of season five and calling the allegations “very disturbing.”

“The events of the past few weeks have been incredibly emotional for all of us” Empire executives Lee Daniels, Danny Strong, Brett Mahoney, Brian Grazer, Sanaa Hamri, Francie Calfo and Dennis Hammer said. “Jussie has been an important member of our ‘Empire’ family for the past five years and we care about him deeply.

“While these allegations are very disturbing, we are placing our trust in the legal system as the process plays out. We are also aware of the effects of this process on the cast and crew members who work on our show and to avoid further disruption on set, we have decided to remove the role of ‘Jamal’ from the final two episodes of the season.”

Rhuaridh Marr is Metro Weekly's online editor. He can be reached at rmarr@metroweekly.com.
← Previous Story Mike Pence’s new chief of staff blamed “repugnant” gays for the spread of HIV/AIDS
Next Story → Interracial same-sex couple emojis will soon be available