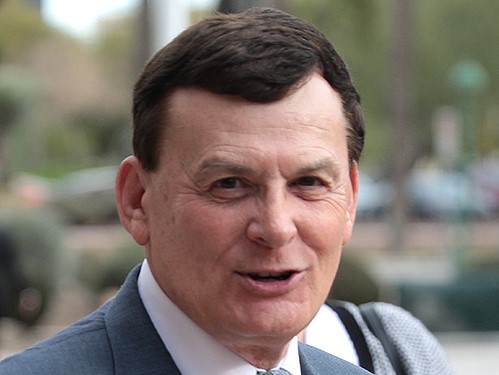 A Republican lawmaker in Arizona abruptly resigned last week after he was confronted with a report that he was once arrested for allegedly having sex with underage boys.

Former State Rep. David Stringer (R-Prescott) was embroiled in an ethics investigation after The Phoenix New Times reported in January that he had been charged with sex crimes in Maryland in 1983.

Stringer was accused of multiple sex offences, including child pornography, according to the report.

The House of Representatives released a Baltimore police report on Friday which showed that Stringer had also been accused of having sex with two teenage boys.

Stringer was reportedly arrested in September 1983 after two boys, both under the age of 15 and one with a developmental disability, said they were approached by him in a park and asked to have sex with him in his apartment.

The police report claims that Stringer paid the boys $10 each after having oral sex.

One of the boys told police that he subsequently visited Stringer at least ten more times to have oral and penetrative sex with him.

Stringer was in his mid-30s at the time of the accusation.

Writing on Facebook, Stringer claimed the police report had “no basis in fact.” He added: “What I will say is that the charges I faced in 1983 are as false today as they were 35 years ago.”

However, The Arizona Republic reports that Stringer accepted a plea of “probation before judgment,” a sentence that clears a person’s charge after they have completed probation.

According to court records, Stringer was sentenced to five years probation on three charges, and also told to attend a treatment clinic that was reportedly for sex offenders.

Stringer says he was forced to resign from his seat after House Speaker Rusty Bowers (R-Mesa) confronted him with the police report, which was obtained by a private investigator on behalf of the House Ethics Committee.

Bowers released a statement calling Stringer’s behavior “absolutely appalling and sickening,” and on Friday said that he had “confronted Mr. Stringer with the information on Wednesday afternoon and again asked him to resign, which he finally did.”

While Stringer accused his Republican colleagues of “forcing me from office” and called their actions “deeply and shamefully offensive to free elections and democratic governance,” State Rep. Kelly Townsend (R-Mesa) — who filed one of two bipartisan complaints against Stringer with the Ethics Committee — told the New York Times that she wanted to give Stringer a chance to defend himself against the report.

Townsend added: “This is a situation that just cannot be overlooked.”

Stringer’s resignation comes after he faced calls in December to step down over comments he made about black people and immigrants.

During a conversation with students at Arizona State University, Stringer said that black people “don’t blend in” like European immigrants to America and “always look different.”

Stringer said that “diversity is relatively new” in America, and that while European immigrants assimilate, “that’s not the case with African-Americans or other racial groups because they don’t melt in.”

Stringer refused to resign, despite multiple calls from members of his own party to do so, and a vote by the Prescott City Council urging him to step down.

Rhuaridh Marr is Metro Weekly's online editor. He can be reached at rmarr@metroweekly.com.
← Previous Story Wisconsin gay couple facing eviction for flying rainbow flag
Next Story → Poll: Majority of Americans would be comfortable with a gay president