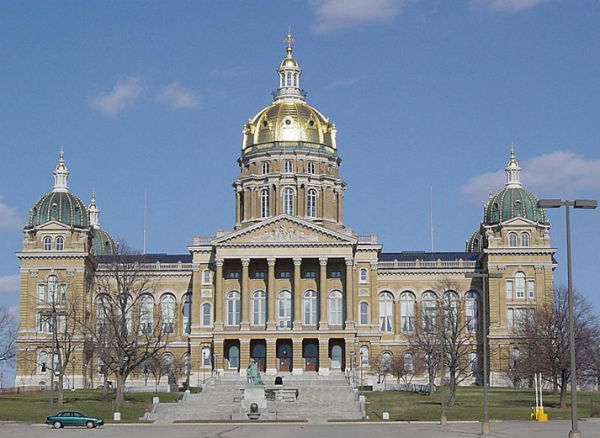 Iowa lawmakers have approved a health and human services appropriations bill containing a provision that would allow government entities to opt out of using public insurance dollars, including Medicaid, to pay for transition-related surgeries.

On Saturday, the Iowa House approved the legislation, which would overrule a March decision by the Iowa Supreme Court that found that the Hawkeye State’s Medicaid program may not discriminate against transgender people by refusing to cover the costs of any gender confirmation surgery that has been deemed medically necessary. The bill passed on a largely party-line vote, with all Democrats voting against passage.

The bill was passed by the State Senate just a day earlier, on Friday.

Under the bill, any state or local government unit or tax-supported district would be allowed to refuse to use taxpayer dollars to pay for “sex reassignment surgery” or “any other cosmetic reconstructive or plastic surgery procedure related to transsexualism, hermaphroditism, gender identity disorder, or body dysmorphic disorder.”

Opponents of transgender rights have long used similar language to justify Iowa’s previous Medicaid ban by claiming that gender confirmation surgery is merely cosmetic and not medically necessary, even in cases where surgery has been deemed necessary for the treatment of an individual’s gender dysphoria.

The bill now heads to Gov. Kim Reynolds (R), who can decide to either sign the full bill into law, or use a line-item veto to block the provision, known as the “Costello amendment,” reports the Des Moines Register.

The ACLU of Iowa, which successfully challenged a nearly identical provision in the Iowa Code, previously sued the state on behalf of two transgender Iowans, arguing that the Medicaid ban violated the Iowa Civil Rights Act, which prohibits discrimination based on sexual orientation or gender identity. As evidence, the ACLU pointed to evidence that Medicaid covers medically necessary surgeries for cisgender individuals — such as mastectomies — that are identical to those sought by transgender Medicaid recipients.

The state argued that the ban is not discriminatory because the department denies all surgeries performed primarily for psychological reasons. But the Iowa Supreme Court agreed with the ACLU and their clients, ruling that the state had failed to provide evidence that gender confirmation surgery was not medically necessary for those with gender dysphoria.

Following passage of the appropriations bill, the ACLU referred reporters to a statement by Mark Stringer, the executive director of the ACLU of Iowa.

“The Costello amendment to the Health and Human Services budget bill is dangerous and harmful. It risks people’s health and lives to score political points,” Stringer said. “Banning Medicaid coverage for gender-affirming surgery would bring significant harm to people who rely on Medicaid and who desperately need this surgery. This is a matter of life and death.

“This cruel amendment has no basis in medicine or science. Every major medical association agrees gender dysphoria is a serious medical condition and that surgical treatment is medically necessary for some transgender people,” Stringer added. “It is a clear violation of equal protection under the Iowa Constitution because it would discriminate against people simply because they are transgender.”

The ACLU has not said whether it will sue the state again should Reynolds refuse to use her line-item veto.

One Iowa Action Executive Director Daniel Hoffman-Zinnel blasted the passage of the bill with the Costello amendment intact and urged Reynolds to use her power to block the harmful provision from becoming law.

“Accessing medically necessary treatment is a matter of life and death for many transgender Iowans. By passing this legislation, our state has sent the appalling message that transgender people are second-class citizens in our state,” he said. “Protecting transgender people from discrimination is settled law in Iowa, and has been since 2007. The Iowa Supreme Court made clear that the Iowa Civil Rights Act protects transgender Iowans against Medicaid discrimination in their unanimous ruling just over one month ago. If this bill becomes law, it will not stand up to legal muster and stick taxpayers with the bill for ensuing lawsuits.”

John Riley is the local news reporter for Metro Weekly. He can be reached at jriley@metroweekly.com
← Previous Story West Virginia assistant principal who confronted trans student in restroom has contract renewed
Next Story → Confirmation class refuses to be confirmed in protest of United Methodist Church’s stance on LGBTQ issues