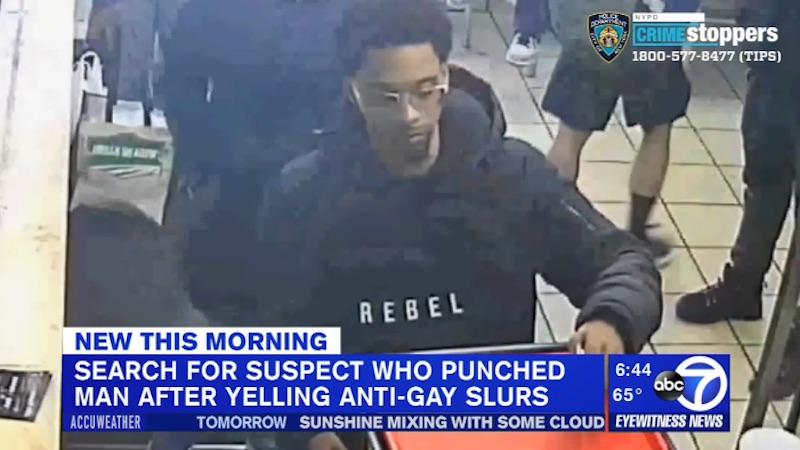 New York City police are looking for a man who allegedly carried out an anti-gay attack in Brooklyn earlier this month.

Police say a man captured on a store surveillance video was the one who punched a 24-year-old victim and yelled anti-gay slurs at him on April 4.

The attack occurred around 1:25 p.m. on Lincoln Road in Prospect Lefferts Gardens.

The suspect, who remains at large, walked up to the victim and his partner outside the Lincoln Market near the intersection of Lincoln Road and Ocean Avenue.

Police say he then allegedly called the victim a “faggot,” punched him in the left arm, and ran east on Lincoln Road in the direction of Flatbush Avenue, reports the New York Daily News.

The victim was not seriously hurt in the attack.

Police are asking anyone with information about the suspect to leave a confidential tip via the NYPD’s Crime Stoppers Hotline, at 1-800-577-TIPS (8477), or for Spanish speakers, 1-888-57-PISTA (74782). Anyone who provides information that leads to an arrest could receive up to $2,500 for assisting police.

John Riley is the local news reporter for Metro Weekly. He can be reached at jriley@metroweekly.com
← Previous Story Transgender women beaten by mob in Dallas speaks out
Next Story → WATCH: Mormon valedictorian comes out as gay in Brigham Young University commencement speech