Tiziano D’Affuso turns Into the Woods’ cow Milky White into something funny, poignant, and showstopping

D'Affuso: "I'm totally letting go and am having an absolute blast" 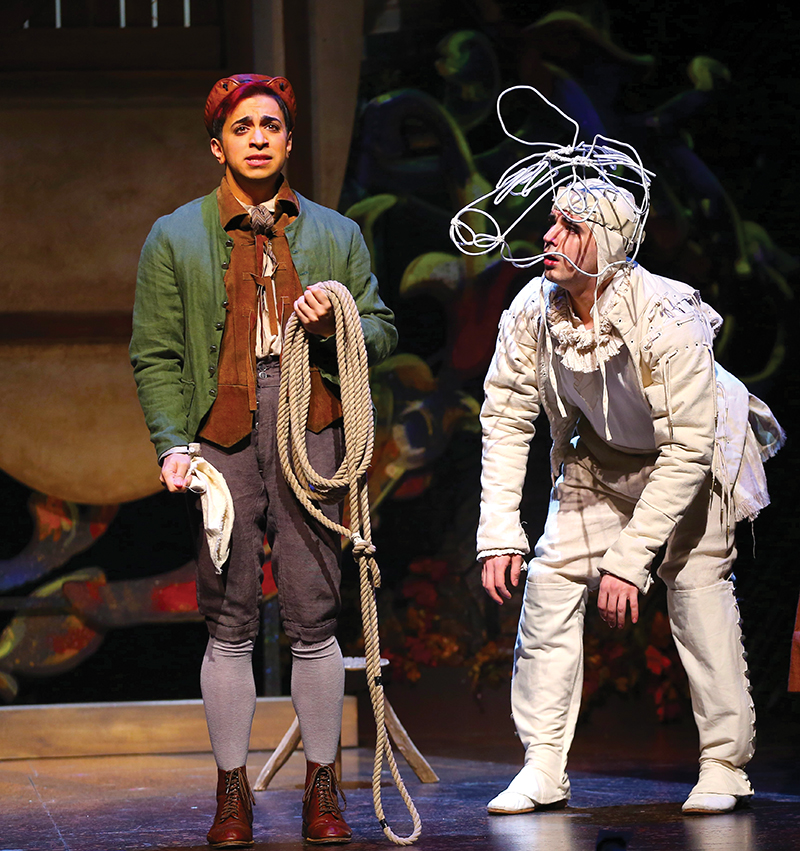 Into the Woods — Photo: Carol Rosegg

Tiziano D’Affuso wanted to be a prince. He ended up a cow. And the Stephen Sondheim-James Lapine musical Into the Woods, now in a spectacular, richly-wrought production at Ford’s Theatre, is all the better for his bovine antics. D’Affuso frequently steals the show, in small, personable ways. His approach to the character of Milky White calls to mind commedia dell’arte, and the costume, a bright white wrap with cow-shaped wire headgear that allows D’Affuso’s face to be seen in full view, bears out this classical approach.

“Peter [Flynn], the director, directed me towards clowning and mask work,” says the 25-year-old, who last summer starred in Monumental’s Pippin. “I was terrified going into this process, because it was my first time with big theater, my first time with a big director. I was intimidated. But now, I’m totally letting go and am having an absolute blast.”

“He’s a sweetheart,” says Samy Nour Younes, 32, sensational in the role of Milky White’s owner, Jack, the boy who scampers up the beanstalk and — criminally, it could be argued — sets off a chain of events that wreak havoc on a fairy tale kingdom. “Usually [the cow] is a prop Jack drags around on stage and manipulates to do whatever he needs it to do. But you can’t do that with a person. You probably shouldn’t do that with a person.”

The cow wasn’t the only animal director Flynn decided to personify in the production — the hen that lays the golden egg and the fluttering birds devoted to Cinderella are brought to vibrant life by a human actor (the extraordinary Karen Vincent).

“It was a very conscious choice to cast Milky White [with a male actor],” says Flynn. “We know that cows, gender-wise, are female — but Jack sees her as a him. There is a real fraternal relationship between them.”

“I don’t have an ‘I Wish’ at the beginning of the show as everyone else does,” says D’Affuso. “I don’t get that until I’m sold off to the Baker and the Baker’s Wife. At that moment, my ‘I Wish’ becomes to get back to Jack. It’s about friendship and a partner and someone that you can trust and someone who’s there for you. So I think that’s really my role — just to be there as a support system for Jack. Which is why, when I’m sold, I’m like, ‘Damn, I gotta go back to him. This is my only purpose in life.'”

Randy Shulman is Metro Weekly's Publisher and Editor-in-Chief. He can be reached at rshulman@metroweekly.com.
← Previous Story Duke Ellington School pays tribute to Matthew Shepard with a production of ‘The Laramie Project’
Next Story → Theater Review: P.Y.G. or The Mis-Edumacation of Dorian Belle