Police are searching for the attacker, who allegedly left his victim bleeding profusely on the sidewalk 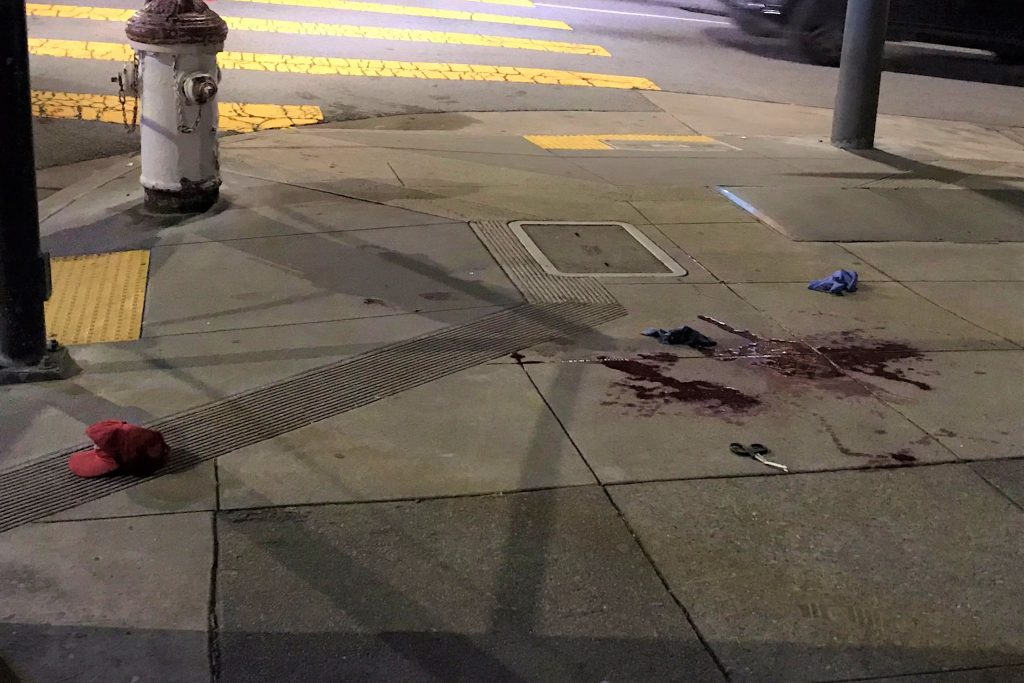 The aftermath of the alleged attack — Photo: @anti0gamer / Twitter

A man wearing a Make America Great Again (MAGA) hat reportedly attacked someone in San Francisco with a sword after using anti-gay slurs.

Police are searching for the man, who fled the scene, after he reportedly left a victim bleeding profusely on the sidewalk.

According to police, the victim and the man got into a verbal dispute outside the rink. The victim tried to remove the man’s hat, synonymous with Donald Trump, which led to the man taking out a sword and attacking him.

However, one witness claims that the alleged attacker also used homophobic slurs prior to the attack.

Posting on Twitter, Scott Sweeney said that he and his girlfriend passed the man as they were walking into the roller rink.

“Tonight, a #MAGA chud targeted a queer friendly roller skating event in San Francisco. We had seen him earlier as we were going in, he called us faggots,” he wrote. “He followed us up to the event with a sword, we made it in okay, but he attacked someone outside. Fuck white supremacy.”

Sweeney expanded on the incident in follow-up tweets.

“My girlfriend and I had to get cash for the roller skating event from a convenience store across the street,” he wrote. “We went there, got cash and a beer, and walked out. Leaning against the wall 15ft away from the convenience store was a man with a MAGA hat, we walked by him.

“He glared at us, we noticed the hat and the glare and flipped him off. He started yelling homophobic slurs at us. We walked across the street back to the roller skating event and drank the beer next to the entrance. He was staring at us the whole time.”

Sweeney continued: “We finished the beer, walked up to the entrance and waited in line to pay for tickets just outside the doors to get in. We then saw him walk up the stairs (hat now turned backwards), and poke his head in the door then walk back. He walked by us and under his breath said ‘not my scene’ to me and my girlfriend before turning his back to his. As he turned his back to us, we noticed a large item tucked in the back of his jacket with what looked like a sword handle poking out the top.”

Sweeney and his girlfriend were sufficiently “weirded out” by the man that they “shuffled quickly into the lobby” of the roller rink.

Speaking to the Chronicle, Sweeney said that they only realized the sword was real when they saw the victim’s blood on the sidewalk.

“In my mind I didn’t think it was a real sword until we came out later and police were on the scene and there was blood and the hat on ground,” he said.

David Miles, who founded the roller rink, said the victim was “gushing” blood.

“I came outside. The guy was cut, he was bleeding like you wouldn’t believe,” Miles told the Chronicle. “He was just gushing blood, so we got the first aid kit from inside and tried to stop the bleeding.”

Posting on Facebook, Miles said it was the first time he had “experienced how utterly crazy T-rump [sic] people really are.”

Tonight is the first time I have ever experienced how utterly crazy T-rump people really are!!! A guy wearing a MAGA hat…

The victim, who has not been named, was taken to hospital and treated for non-life-threatening injuries.

Policing are urging anyone with information on the attack to call investigators on 415-575-4444.