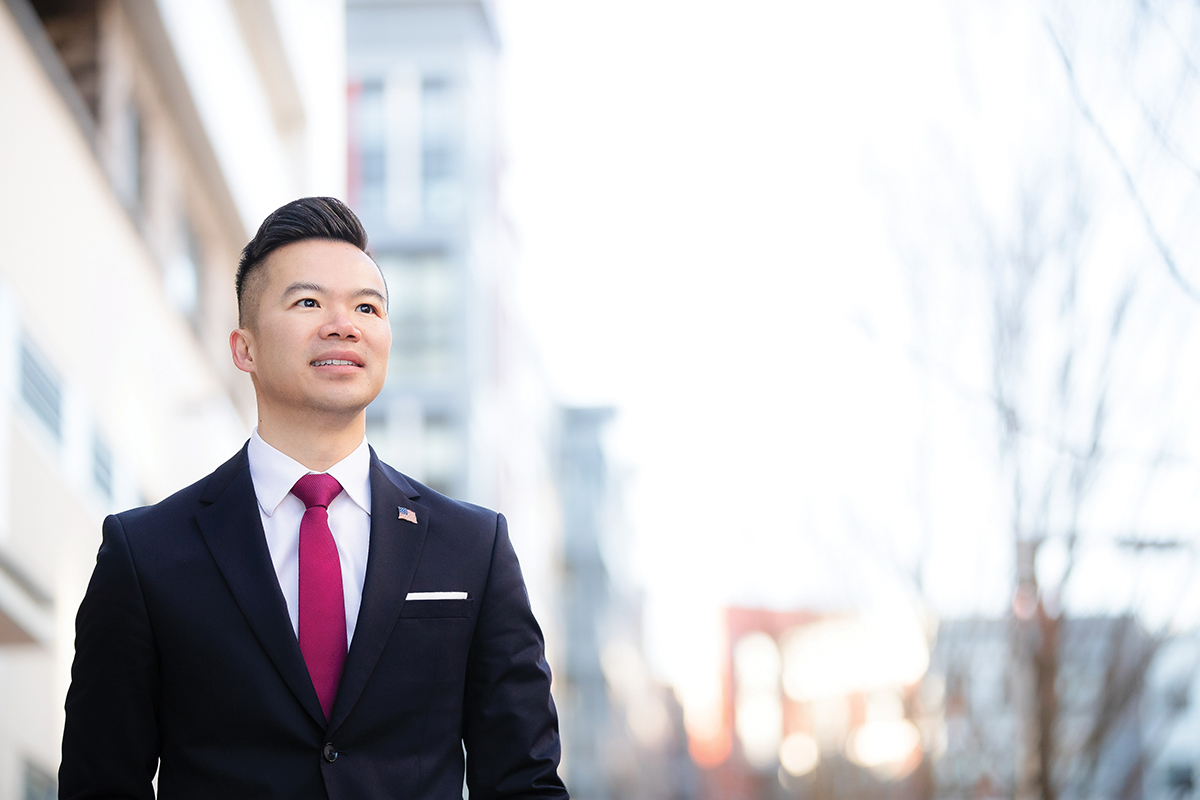 Very few candidates for political office are willing to invite legal action against themselves. But for Linh Hoang, it’s a matter of principle.

An openly gay man running this November to represent the Providence District on the Fairfax County Board of Supervisors, Hoang believes that Fairfax’s elected leaders can — and should — take stronger stances in support of LGBTQ equality, whether it’s speaking out against bullying, or defending members of the transgender community when they are targeted for discrimination or violence.

“There are things we can do at the local level to make sure our residents are safe,” says the 36-year-old Hunters Branch resident. “As supervisor, I’ll introduce an ordinance to prevent discrimination in the workplace or housing because of your sexual orientation.”

Hoang, who has been married to his husband, Nick, for four years, acknowledges that introducing an LGBTQ-inclusive ordinance in the commonwealth’s largest county would be a bold move — one that would generate headlines, and lots of criticism, due to Virginia’s being a “Dillon’s Rule” state.

That means local county governments are prohibited from passing laws that go beyond the scope of those approved by the state legislature, such as adding “sexual orientation” or “gender identity” to nondiscrimination ordinances when the General Assembly has categorically refused to approve any sort of protections for LGBTQ individuals. The prospect of interference from the Republican-run General Assembly or the Attorney General’s Office would be likely, and Hoang would welcome the challenge.

“If the state wants to sue us, so be it,” he says. “I think we need to be courageous in taking a stand in defending our LGBT brothers and sisters.”

Equality and equity are two concepts Hoang speaks about frequently on the campaign trail. And his personal experiences as both someone who immigrated from Vietnam to the United States at age 10 and as an openly gay man of color have shaped his views on supporting marginalized and underrepresented communities.

“I’m here in the United States because my father escaped from a re-education camp in Vietnam in search of freedom and opportunity,” he says. “Like so many immigrants who came to this nation before, he believed America was the land of opportunity. He was willing to risk everything, including his own life, so his family could have a better future.

“The first few years, it was hard. We lived with 10 people in a three-bedroom apartment in East Oakland, California. Our parents worked multiple jobs to put food on the table,” Hoang says of his earliest years in this country. “But my parents always encouraged education. They wanted to make sure we worked hard in school and went to college.

“Seven years later, I had the chance to go to Georgetown University on a full scholarship. So education was my ticket out of poverty. It gave me the chance to attend a great university, a chance to work for some of the best technology companies in the world.”

Now, Hoang hopes to provide similar opportunities to the residents of his adopted home county.

“Fairfax County is my home. It’s a phenomenal place to live, to raise a family, and start a business,” he says. “We need to make sure it’s an even better place for everyone. We need to make sure that everyone has access to opportunities to reach their fullest potential, and I want to make sure we are becoming an inclusive Fairfax for all.”

Hoang has spent most of his career employed at some of the nation’s top technology companies as a management consultant, working with the U.S. government, federal agencies and the Department of Defense. He feels experience working in the private sector and with technology are assets that will help in fighting to make Fairfax economically competitive.

“Fairfax County is at an important crossroads,” Hoang says. “Our economy and our communities are changing. We need to celebrate the growth in our county, and think about where we want to be in the next 10, 15, 20 years from now and think boldly about the future.”

Through his personal conversations with county residents and voters, Hoang sees three major priorities as essential to creating a better Fairfax County: diversifying the local economy, improving transportation, and ensuring the county’s school system — which ranks as one of the best in Virginia, if not the nation — continues to attract and retain talent while providing high-quality education to all students.

As a member of the board of the Virginia Small Business Financing Authority, Hoang helped connect small businesses with access to capital, which helped create thousands of jobs in Fairfax. He sees growing those small businesses as the key to remaking the county’s economy.

“No longer can we rely solely on federal government contracting,” Hoang says. “I want to position Fairfax to compete globally around the world, and empower small businesses to create jobs and industries of the future right here in Fairfax County. So think artificial intelligence, autonomous cars, all of the new technology — we need to attract those companies and bring them to Fairfax County.”

Another factor in improving life is education. While Fairfax County has its own Board of Education, funding for the school system is approved by the County Board of Supervisors. One of the things that troubles Hoang is what he sees as an exodus of teachers who leave because of better financial prospects elsewhere. He suggests raising teacher pay to retain high-quality educators, and working with the school board to refocus educational efforts on providing more training experiences around science, engineering, technology and math, as well as developing leadership and interpersonal skills that will help graduates of the public succeed in the work world.

The candidate has incorporated several progressive themes in his campaign, including protecting parks and open green spaces, achieving a carbon-neutral footprint for all public facilities in the county, expanding the types of identification so undocumented residents can prove their identity, and ending any collaboration with Immigration and Customs Enforcement in detaining and deporting undocumented immigrants. Currently, an estimated 12,000 Fairfax County residents are involved in deportation proceedings.

“As an immigrant, it’s very personal to me,” he says. “I was welcomed and given so many opportunities in this country. As a member of the County Board of Supervisors, I will fight to end our collaboration with ICE, make sure we do not do anything unconstitutional, and provide legal representation for immigrants. Data shows that when people receive legal representation, their cases are more likely to be dropped and they can get immigration relief.”

Hoang feels his goals can be accomplished by reevaluating spending priorities and reapportioning money within the existing budget, rather than raising taxes.

“When I look at the budget, I look at it through the lens of equity: how do we make sure that your zip code does not dictate your future success? Wherever you live in the county, you should be able to attend great schools,” he says. “When I become a supervisor, I’ll fight to make sure that no matter where you’re from, what color your skin is, who you love or how much money your family has, there’s a place for [you] here in Fairfax County.”

John Riley is the local news reporter for Metro Weekly. He can be reached at jriley@metroweekly.com
← Previous Story Studio Theatre, Whitman-Walker, and RealTalk DC host special session of “Floetic Fusion,” a youth mic night, on May 10
Next Story → Second annual Silver Pride, celebrating LGBTQ seniors, is Friday, May 10