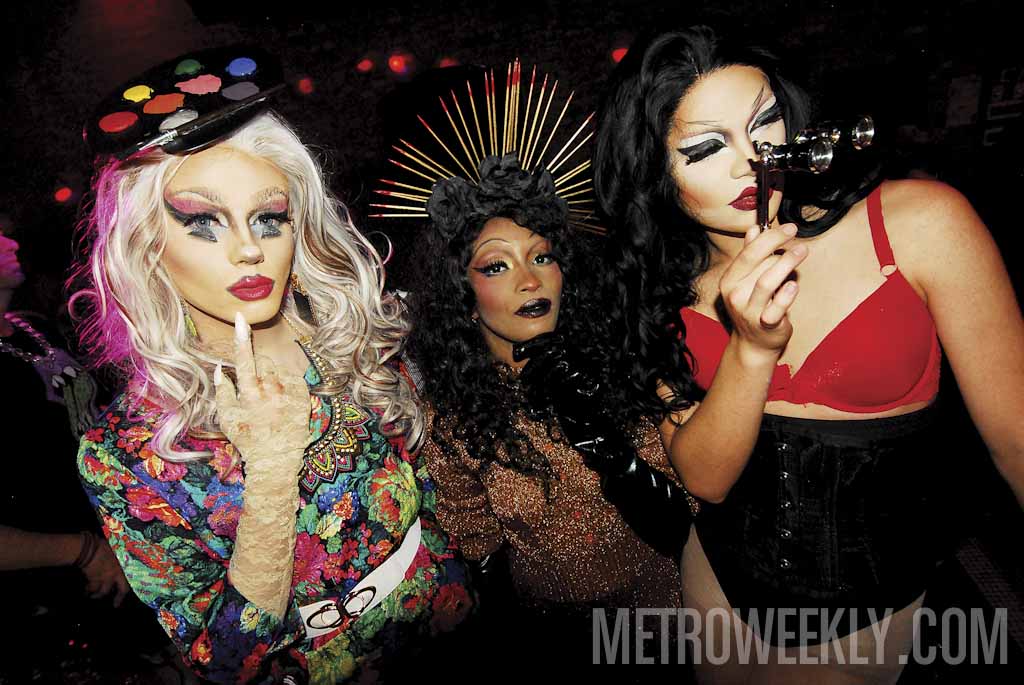 Jane Saw is the host and Lemz and Keenan Orr will be spinning as resident DJs — but otherwise this is not like the usual Sleaze party. For starters, it’s taking place on a Friday night — May 17 — and not Thursday. It’s also at DC9, and not Wonderland Ballroom (or U Street Music Hall). This special Sleaze is intended as a showcase for London-based DJ/producer Hannah Holland. A frequent resident DJ at The Carry Nation’s Good Room parties in New York and also the Panorama Bar at the infamous Berlin all-hours hotspot Berghain, Holland headlines the party after Lemz and Orr set the right dark disco tone, getting the crowd good and sweaty. The party is 21 and up and starts at 11 p.m. DC9 is at 1940 9th St. NW. Tickets are $10 to $15. Call 202-483-5000 or www.dcnine.com.

Bears Can Party comes out of hibernation and offers another tour of the Bear Cave at Green Lantern. Pup Kalb Indigo is the “GoGo Pup” and host and Jeffrey Elettø spins, under his alias DJ Popperz, a mix of “retro/club/hip-hop/Latin & Britney.” Naturally, the “Beartenders” will be slinging drinks from the full bar as well as $5 signature drinks with names like “The ManBearPig,” “Bear Cum,” and “The Honey Pot.” “Jump into the fog and have some fun,” whether you opt to dress up in leather, strip down to your jock or underwear, or just wander in your regular garb. The party, hosted by 495 Bears, and for those 21 and over, starts at 9 p.m. this Saturday, May 18. Green Lantern is at 1335 Green Ct. NW. No cover. Call 202-347-4533 or visit www.greenlanterndc.com.

In the past couple of years Josh Vogelsong’s monthly alternative drag-focused party has helped spawn a coterie of monthly alternative drag-focused events at Trade, including Pussy Noir’s Sissy That Tuesday and KC B. Yoncé’s Slay My Name. “People show up in looks, everybody comes dressed up,” Vogelsong says about Gay/Bash, the spunkiest of the bunch. “Everybody gets crazy during the show. You can just spray beer on the crowd, and they’d cheer and love it. It’s wild.” For the May iteration, the theme is pageantry, with shows from Ana Latour, Jane Saw, Sippi, Brooklyn Heights, and, last but not least, Donna Slash, Vogelsong’s other-persona. Jams from the Barber Streisand, with Connor serving as “Stage boy.” Saturday, May 18. Doors at 10 p.m., with shows at 11:30 p.m. and 1 a.m. Trade is at 1410 14th St. NW. Call 202-986-1094 or visit www.facebook.com/gaybashdc.

Initially refused loans, Pia Carusone and Rachel Gardner turned to Indiegogo to become, in effect, “the largest crowdfunded distillery in U.S. history.” Explicitly women- and queer-owned and operated, Republic Restoratives Distillery and Craft Cocktail Bar, located in the distilling-rich Ivy City neighborhood, will celebrate its first three years in business as well as toast all those who helped it get to where it is today. There will be grub from New Standard Sandwich as well as Reverie, a special anniversary-only screen printed t-shirt, and, of course, fancy cocktails made with Republic spirits, which range from Civic Vodka to Rodham Rye. The party is set for this Sunday, May 19, from noon to 6 p.m. Republic Restoratives is at 1369 New York Ave. NE. Tickets are free but RSVP recommended. Call 202-733-3996 or visit www.republicrestoratives.com.