Capital Pride 2019: A parade interrupted and a jam-packed festival

Not even a massive, terrifying disruption at Saturday's parade could stop D.C.'s LGBTQ community from enjoying Capital Pride weekend 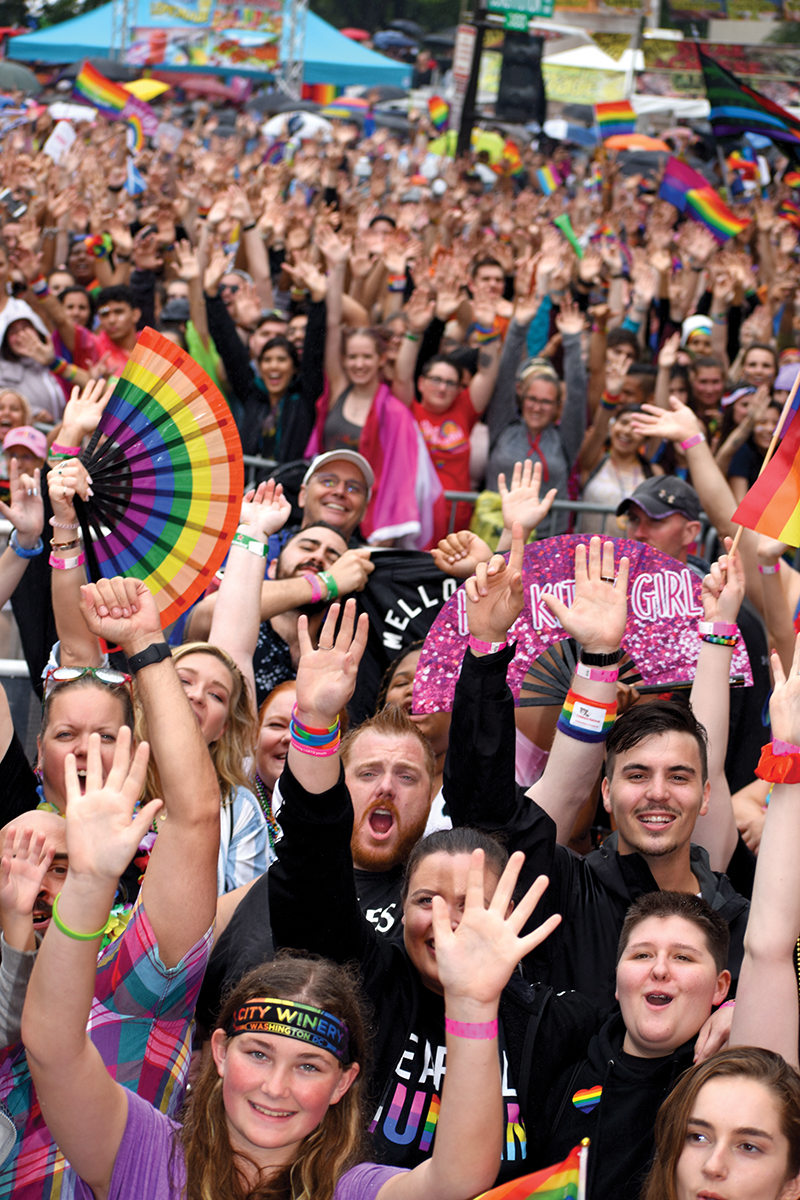 If nothing else, this year’s Capital Pride celebration was a testament to the resilience and unflappable nature of the LGBTQ community. While the festivities did not go according to plan — particularly the Capital Pride Parade, disrupted by false reports of an active shooter in Dupont Circle — the other celebrations, including the Capital Pride Opening Party, “Crack of Noon” Pride Brunch, Capital Pride Block Party, Defiance Dance Party, and Capital Pride Festival proceeded without a hitch.

“The key thing that was shown to me,” said Ashley Smith, president of the Capital Pride Alliance, “was that even through everything on Saturday during the parade, many people still went out to that evening’s event at City Winery…and other events, and had a great time, in celebration of the Pride season and Pride weekend.

“Even with the rain that took place on Sunday, the number of people who were there was phenomenal,” he continued. “The entire weekend was very successful because it showed our community is united in wanting to be supportive, and that we are not going to allow any obstacle to get in the way of having a wonderful community celebration.”

The sentiment was echoed by Amy Cannon, of Manassas, Va., who was among the thousands of Washington area residents who refused to be deterred from celebrating Pride with her daughter. Cannon, who marched in the parade on Saturday with PFLAG, was unaware of the parade disruption until after she had finished marching, when she began receiving Facebook messages from friends asking if she was safe. But Cannon said she never thought about not attending the Capital Pride Festival the following day, despite the initial uncertainty surrounding the disruption of the parade.

Panic at the Parade

ON FRIDAY NIGHT, Capital Pride was progressing as expected, with Riot!, the opening party at Echostage on Friday night, sold out, and thousands gathering on Saturday afternoon to watch the Capital Pride Parade from various vantage points along its 1.5-mile route. Marchers began lining up near the intersection of 22nd and P Streets NW by mid-afternoon, putting finishing touches on their floats, hoisting banners, donning face paint and glitter, and chatting with longtime acquaintances as they waited for the signal to begin marching.

Around 7:20 p.m., about two-thirds of the way through the allotted time period for the parade, attendees stationed in Dupont Circle Park reported hearing “pops” that mimicked gunshots, sparking fears among some of a possible shooter. The surge was instant, and barricades toppled, as parade-watchers flooded out of the circle en masse, pouring into the street and in all directions screaming “Run! Run! Run!” Hundreds of people tore through P Street, 21st Street, and New Hampshire Avenue, with the ensuing chaos caught on video and shared to social media.

Elizabeth Hernandez, 19, of Falls Church, Va., recounted how she was pushed into a restaurant by a man she didn’t know, spraining her ankle in the process. She hid in the restaurant’s bathroom, while others hid under tables and moved away from windows for fear that there was an active shooter. “Everyone was just running,” Hernandez recalled. “It looked like a movie scene.” A second wave of panic followed, allegedly set off by someone dropping a tray on the ground, according to local newsradio station WTOP.

D.C. Police later confirmed that a man was arrested for possession of a firearm. Commander Guillermo Rivera, the head of MPD’s Special Operations Unit, told reporters that there was “no evidence at all that any shots were fired,” despite several witnesses reporting hearing gunshots.

According to documents filed in D.C. Superior Court, 38-year-old Aftabjit Singh allegedly drew a gun on two men who were protesting the Pride parade and allegedly sprayed his wife with mace after she bumped into them. He confronted the men, and was hit and maced himself.

An officer responding to reports of someone with a gun arrived to find Singh at the fountain in Dupont Circle, with a partially open brown bag nearby. The officer observed what appeared to be the body and trigger of a silver handgun in the bag, which was determined to be Singh’s. Singh told the officer it was a BB gun, later confirmed.

While being arrested, Singh allegedly said, “I’ll be back. I’ll shoot the motherfucker.” In police custody, he admitted to pulling the gun out and pointing it at the two men after he had been maced. He has since been charged with possession of a BB gun, and threats to do bodily harm.

The disruption ended the parade early, though Capital Pride’s other events and festivities continued.

D.C. resident Ananikay Nelson, 25, was near Dupont Circle when the chaos broke out. She did not hear any gunshots, but was also not willing to stick around after realizing people were panicking. She felt it was unfortunate that the rest of the parade wasn’t able to continue. “I was really enjoying it, I’ve got my beads, my bracelet saying ‘Love Means Love,’ but what can we do about it? We just gotta move forward,” she said.

Even Hernandez said Saturday’s incident won’t prevent her from coming back in the future. “I’m not gonna be not gay because something happened,” she said.

Capital Pride says that this year’s disruption, while unfortunate, will help the organization to develop contingency plans and bolster security for next year’s festivities.

“There’s definitely things for us to learn from this year as we prepare for future celebrations,” said Smith. “There’s things for us to be aware of, and we need to look at what we can do to ensure safety, which is a critical part of our success.”

Celebrating, Whatever the Weather

SUNDAY’S FORECAST WAS GLOOMY, with rain predicted much of the day. But there were no serious downpours, and the minor sprinkles didn’t stop thousands from filling stretch of Pennsylvania Avenue between 6th and 3rd Streets NW.

Pride’s makeup hasn’t changed much over the past 20 years: there were booths manned by local community organizations (and major corporations) handing out free swag and information, various food stands, and several concert stages, including the main one occupying its traditional berth, the Capitol rising majestically in the background.

“The rain may have wanted to shut us down, but the community came out in full force,” Smith said. “The artists were phenomenal. We had some great acts. Many of the artists came back and spent some time at the festival, just to enjoy themselves after they performed.

“Everyone who I spoke to that day [were] amazed at how everything turned out. Even in light of everything on Saturday, people loved what we did, collectively, as a community.” Smith praised the Capital Pride staff and volunteers who worked hard behind the scenes to make the day a success.

For most of those in the crowd, the inclement weather and Saturday’s disruption were just sidenotes to a weekend focused on celebrating LGBTQ identity and a spirit of community. Even musical artist Big Dipper, one of the day’s concert headliners, marveled at the number of people who attended.

“It was raining, so I was really impressed that so many people were ready to stay and watch the show,” he said in his trailer following the performance. “You think when you perform on such a big stage that it’s just like a wall of people, but from the stage, you can actually see every person out there. You can make eye contact with them. The energy that I felt was incredible.”

Noting that not all Pride attendees may have been familiar with his work, Big Dipper said he saw a change in how the audience was receiving him after a few minutes.

“It seemed like quizzical and maybe skeptical at the beginning which often happens at my gigs,” he said. “People are curious about who I am. And about three songs in, I begin to win them over and by the end, people seemed really excited and overjoyed to be celebrating all together out in the street.

“For me, as an artist, being able to be a queer person getting up on a stage and living as freely as I get to for the 20 minutes that I just did is an incredible privilege. It’s something really special and unique to a Pride stage. For that, I’m grateful.”

D.C. resident Gourab Khan, 35, was celebrating his eighth Pride. He said the inclusive nature of Pride, bringing together LGBTQ people and allies of all ages, is something that draws him to the annual event. He feels people experiencing their first Pride should not be afraid of embracing the experience.

“I remember back in those days when I wasn’t out and I felt like I second guessed myself. ‘Should I even join?’ and ‘What would my friends or co-workers think?’ and ‘Will I get labeled?’ But now I see that there is nothing that should be holding anyone back. So enjoy, have fun, and show up.”

“I have to show up for a lot of reasons,” said Siobhan Grayson, of Alexandria, Va., celebrating her twentieth Pride. “It’s being a female, being a lesbian, being black. All of those things are under attack. So I have to give face to who we really are. We are strong, proud people. I want to be there to make sure I’m representing that. I want to live out and proud.”

For more information on all of Capital Pride’s year-round events, or to get involved with next year’s festival, visit www.capitalpride.org.