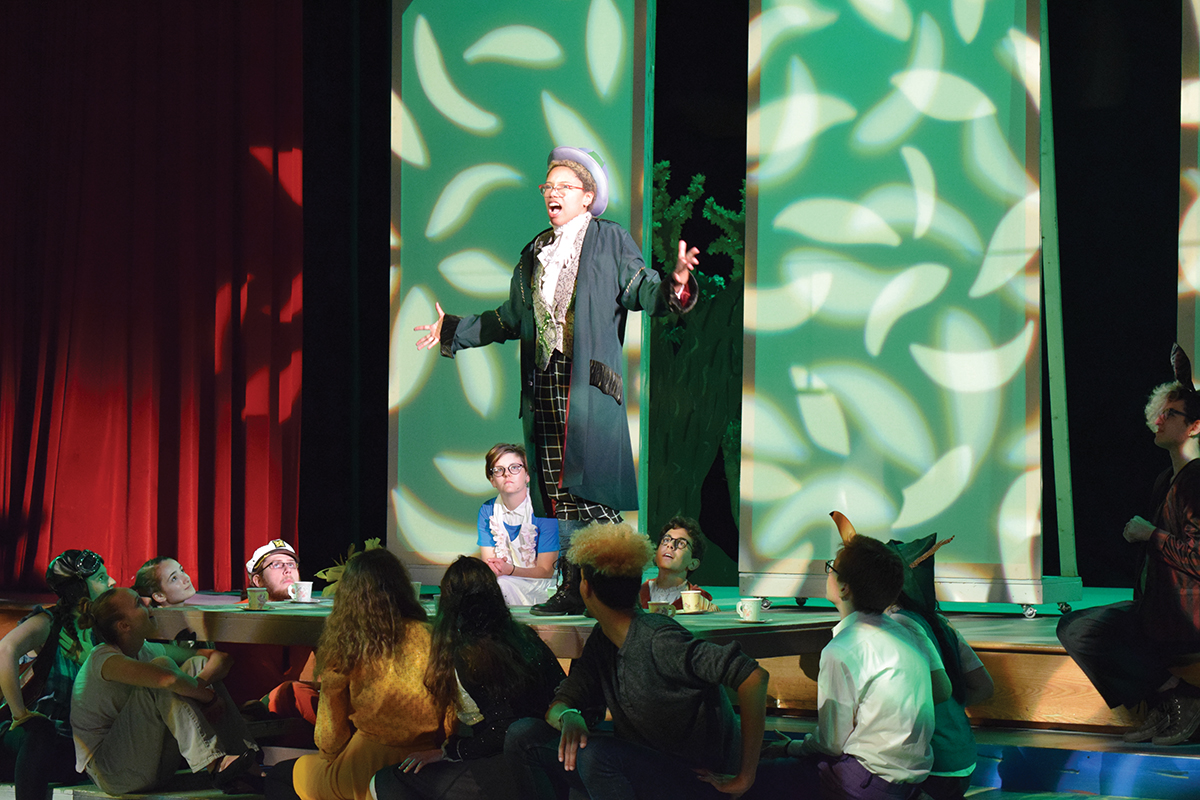 Once upon a time, not very long ago, Buzz Mauro and Norman Allen locked arms and ventured down a creative rabbit hole together, setting out to create an original musical. The result became a vibrant, contemporary riff on Lewis Carroll’s classic, Alice in Wonderland. Their version, however, Alix in Wonderland, would traverse a decidedly different path.

“It’s about a kid exploring the possibility of gender nonconformity who falls down the rabbit hole,” says Mauro, co-founder and co-executive director, along with Deb Gottesman, of the esteemed local acting academy, The Theatre Lab. “The show is a whole ‘Who are you?’ thing, and that question gets really intensified throughout. Everybody keeps asking Alix who she is, and she can’t quite figure it out. She comes to a revelation by the end.”

As Mauro and Allen hashed things out, they discovered new motivations for familiar characters. “The Mock Turtle is always crying because he’s not a real anything,” says Mauro. “He’s kind of in-between things. This really resonates with our Alix in ways that she doesn’t quite understand. But it leads to the climax where she starts to realize that she can’t escape making some decisions.”

The show, which will run for four performances this weekend starting tonight, is produced by The Theatre Lab’s Summer Musical Theatre Institute for Teens. The production is fully staged and features roughly 30 teen actors between the ages of 13 to 19, including many who identify as binary and trans, allowing for a deeper resonance and connection to the piece overall.

Though Mauro notes that the piece has its darker moments, the messages within are designed to spark joy. Take the Tweedledee and Tweedledum showstopper. “They’re nonbinary,” he says of the characters, “and the way that plays out in their musical number is that they like to be both extremely stereotypically feminine and extremely stereotypically masculine. They go back and forth. It’s a funny number with lots of poking fun at stereotypes. There are also a bunch of trees in the number — and they’re all nonbinary. And when our students play trees, it’s a little bit different.”

Recently, during a rehearsal of the Tweedledee-Tweedledum number, a staffer approached Mauro and remarked on how profound it was to watch. “There were all these kids — boys and girls and nonbinary people and trans kids of all stripes — all doing super ‘masculine’ and super ‘feminine’ stuff. They were having a ball doing it. He said he probably would have been embarrassed to do that when he was a kid. To see these kids embracing these ideas is just moving.”

Randy Shulman is Metro Weekly's Publisher and Editor-in-Chief. He can be reached at rshulman@metroweekly.com.
← Previous Story Capital Fringe 2019: A Complete Guide
Next Story → Theater Review: ‘The Band’s Visit’ is a must-see